Tokyo is in a constant state of flux, especially when it comes to food. Eateries come and go like the seasons, and while it may be aggravating to some that otherwise wonderful restaurants are made with the intent of being temporary, you would be doing yourself a disservice to pass on Tokyo’s latest addition, The Farm Tokyo.

Located directly across the street from Tokyo Station’s Yaesu Central exit, you’ll find what appears to be a whimsical playground for adults, complete with beer, barbecue, french fries and more. The Farm Tokyo, open until October 31, is rightfully described as a greenery-filled beer terrace and bakery, its earthy color palette and shrubbery solidifying that vision. A large sign and tractor welcome you at the quaint entrance to the garden, but nightfall is when it really becomes a treat for the eyes, with fairy lights tying the six food and drink stations together. 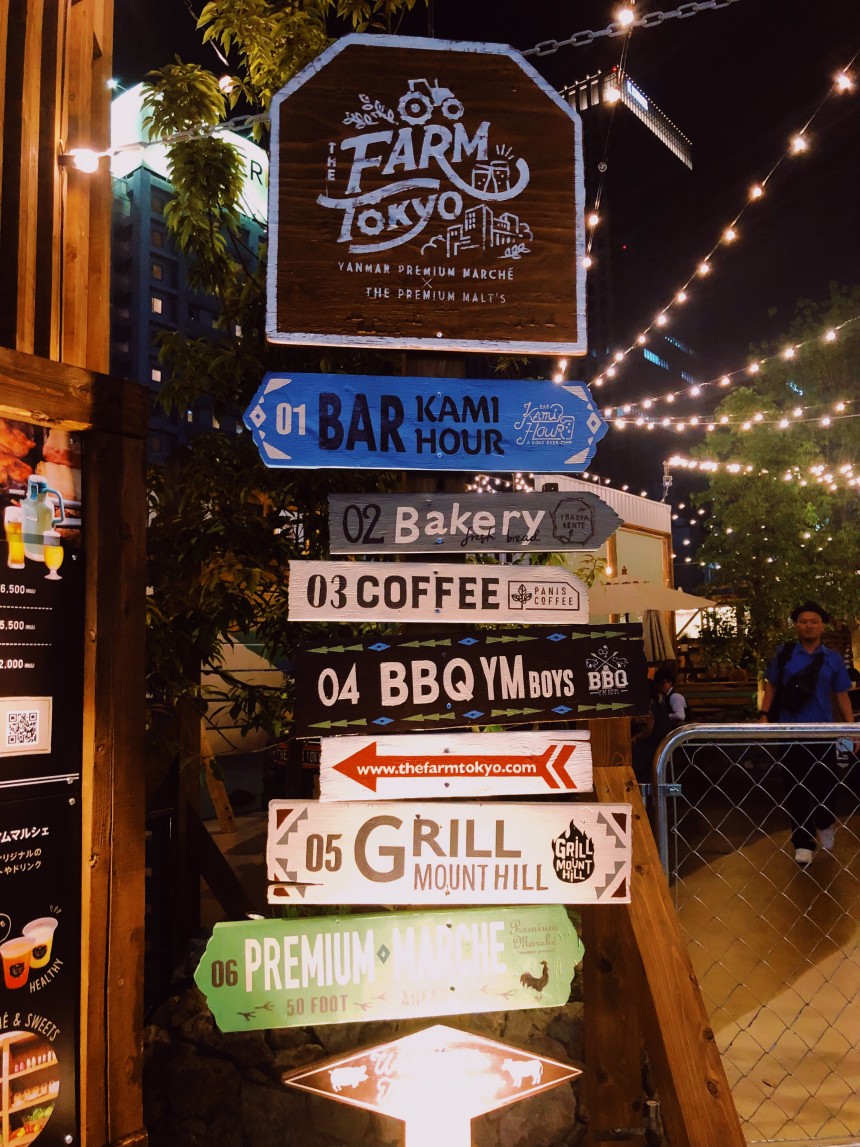 The Farm Tokyo is designed like a miniature new-age village. You choose where you want to sit. Picnic tables make up the bulk of seating, and tables in the back of the garden come equipped with grills. Most tables also have an umbrella in case of rain. Take note that you have to book a reservation for the barbecue option. Sophisticated vending machines offering English, Japanese, Korean and both Traditional and Simplified Chinese options handle ordering, and gluten-free options are available so those with dietary restrictions need not worry.

With a broad menu, The Farm Tokyo ensures that there’s a bit of something for everyone. Station one is home to Kami Hour, all drinks both alcoholic and soft are dispensed through here. Station two is Traspa Rente, the garden’s very own bakery. Attached to the bakery, and doubling as station three, is Panis Coffee. While opening and closing times vary by station, stations two and three close the earliest.

Stations four through six are responsible for the bulk of the food and stay open the latest. Station four sits at the back and houses BBQ YM Boys, which is closest to the restrooms and vaping area (smoking tobacco isn’t allowed). Station five is Grill Mount Hill where you’ll find pizza and delicious french fries. Last but not least, Premium Marchè serves ice cream, parfaits and other delicacies to satisfy your sweet tooth, so long as you place your order before 6pm. 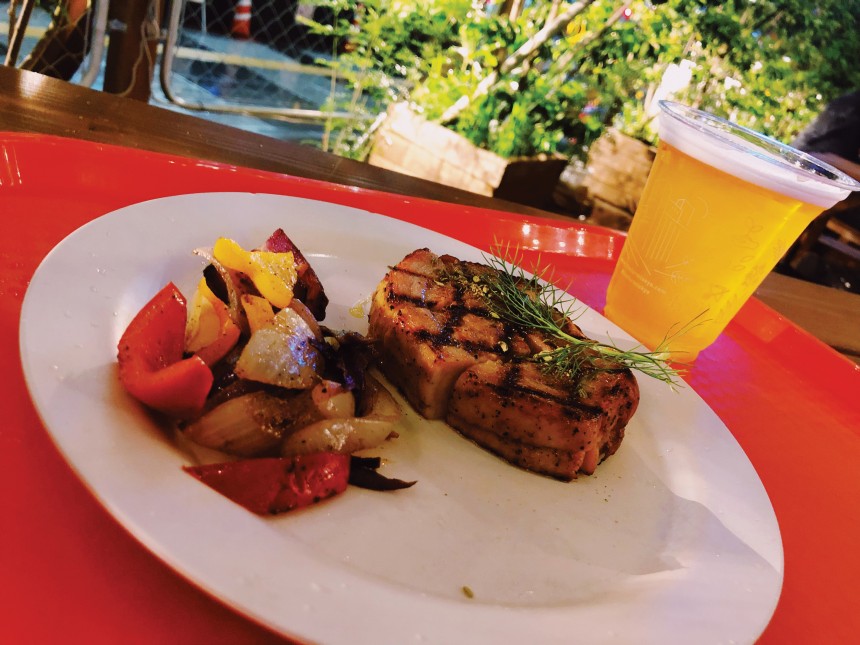 Despite my low expectations, the endearing presentation possibly being a front to distract from ordinary food, I’ve never been happier to be wrong. Starting off with Grill Mount Hill, the pork in the grilled porchetta and seasonal vegetable dish was flavorful and chewy, but not to the point of frustration. The seasoning on the vegetables was far from skimpy and the onions were the breakout star of the dish. If you’re looking for something filling but not as heavy as steak, this should be right up your alley.

What deserves the most praise is the beer, which is nothing short of phenomenal. The garden has its own specialty flavors, including a lemonade beer. Upon the first sip, the beer has a hint of sweetness that hovers tartness. It leaves a strong first impression, not quite a roundhouse kick yet not necessarily an uppercut — before smoothing out to a wonderful aftertaste. 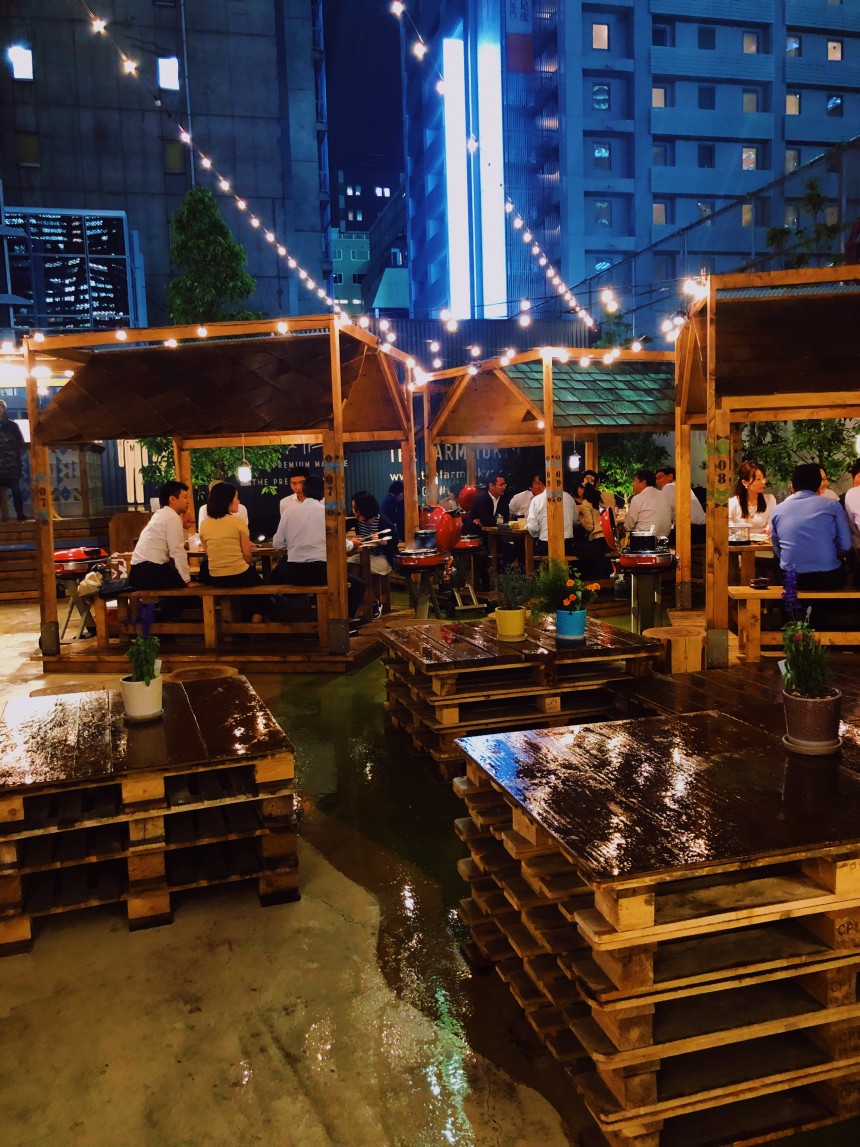 Food and drinks aside, the overall atmosphere is one of comfort and openness, despite a crowd consisting mostly of afterwork office workers. As I drank my beer, a Japanese couple asked to sit beside me, resulting in a brief but pleasant chat. Laughter and French jazz served as the backdrop for our conversation, a much needed and welcome respite from the typical Tokyo lifestyle. There are many places to indulge in escapism within Tokyo, but this beer garden simply has too much going for it to be passed up.

At the moment, there’s no word on whether The Farm Tokyo will return in 2020 or if it would even be in the same location. For the time being, pay a visit and marvel at how unexpectedly out of place a beer garden looks 100 feet from Tokyo Station, then treat yourself to some great food, beer and maybe even an ice cream cone — because you deserve it.

Austin Freeman is an African-American living in Tokyo. His work encompasses many topics including but not limited to food, Japanese (pop) culture and sociopolitical issues. He enjoys photography and James Patterson novels.