I recently had the good fortune of scoring a much-coveted seat at the main counter of one of Tokyo’s hottest new restaurants—Hakkoku, a sushi-ya helmed by rising culinary star Hiroyuki Sato. Chef Sato rose to prominence at Sushi Tokami, where as head chef he quickly gained worldwide accolades that eventually culminated in a Michelin star for Sushi Tokami. Sato left Tokami about a year ago and in February this year opened his new shop, Hakkoku. 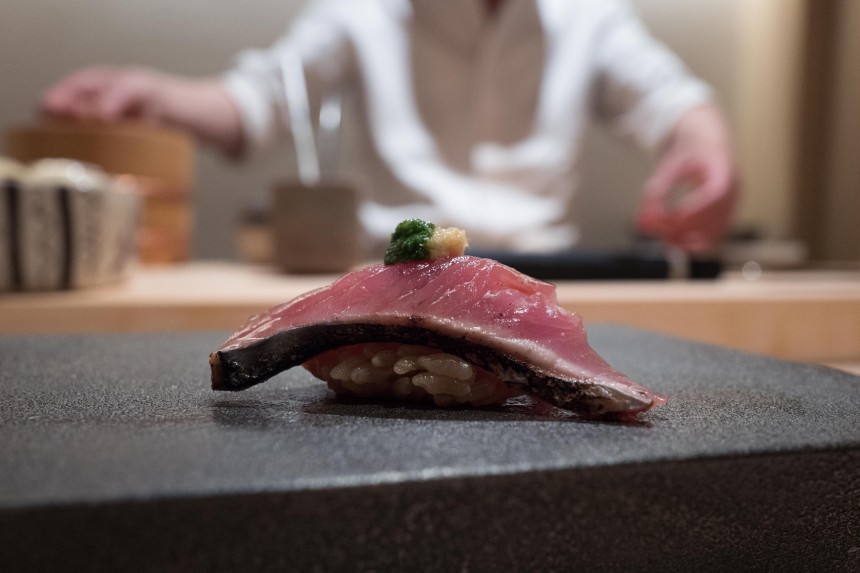 The restaurant is located in the middle of Ginza and occupies the entire third floor of its resident building. There are three counters, each sitting six patrons (at the moment only two counters are open, the third counter will begin operations shortly). Opening a three-counter restaurant in ultra-competitive Ginza is quite a bold move, but it reflects Sato’s confidence and business acumen. He is funny and charismatic; not only an excellent sushi chef but also a fantastic host, he exudes a natural ability to interact with customers and create a relaxed, enjoyable atmosphere at the counter. The interior design of the restaurant is strikingly beautiful; a modern, ultra-minimalist Japanese aesthetic that has proven to work well for high-end sushi shops. 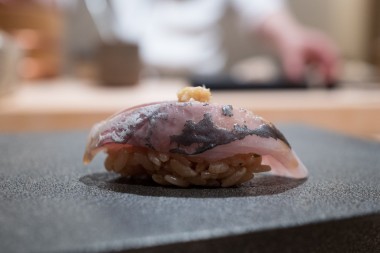 The meal opens with one of Sato’s signature offerings: a wonderful tossaki hand roll. Tossaki is a high-flavor cut of hon-maguro (bluefin tuna), from the base of the tuna’s head. No otsumami (appetizers) are offered, instead, the focus is strictly on nigiri sushi, with a rather astounding 32 pieces being served on the night I was there. Sato’s unique shari (seasoned sushi rice) preparation, which became quite famous at Tokami, is still in full effect at his new shop: al-dente rice is strongly seasoned with two types of akasu (sake lees vinegar), rendering the rice a dark brown color, so much so that the uninitiated might mistake it for brown rice. On the saltier side, this rice is calibrated to work well with sake and fatty, full-flavored neta (sushi toppings). Although it’s not my absolute favorite rice in Tokyo, I did enjoy its flavor and found it to work very well with most of the sushi toppings that were served. 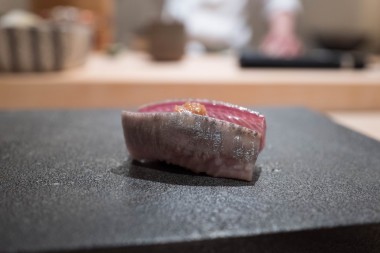 The quality of the sushi ingredients is remarkably high throughout, with some extremely rare bites being offered, nama anago (raw sea eel) and budou ebi (“grape shrimp,” a seldomly found variety of shrimp) are two examples. Other standouts: the in-season iwashi (sardine); the out-of-season yet delectable hon-maguro (all pieces of maguro were great and worked well with Chef Sato’s sushi rice); the ankimo (monkfish liver); the subtle, sweet makogarei (marbled sole); the toothy torigai (Japanese cockle)…I could go on. I found even the neta to be of uniform high quality, beyond being wonderfully tasty. There was not a single “weak” piece, a tribute to both the quality of ingredients and chef Sato’s preparation skills.

The only downside? Hakkoku’s pricing reflects the very high-quality product on offer. I paid roughly ¥41,000 all-inclusive, with a draft beer and two or three glasses of delicious nihonshu. Definitely not cheap, but in my opinion, well worth it. 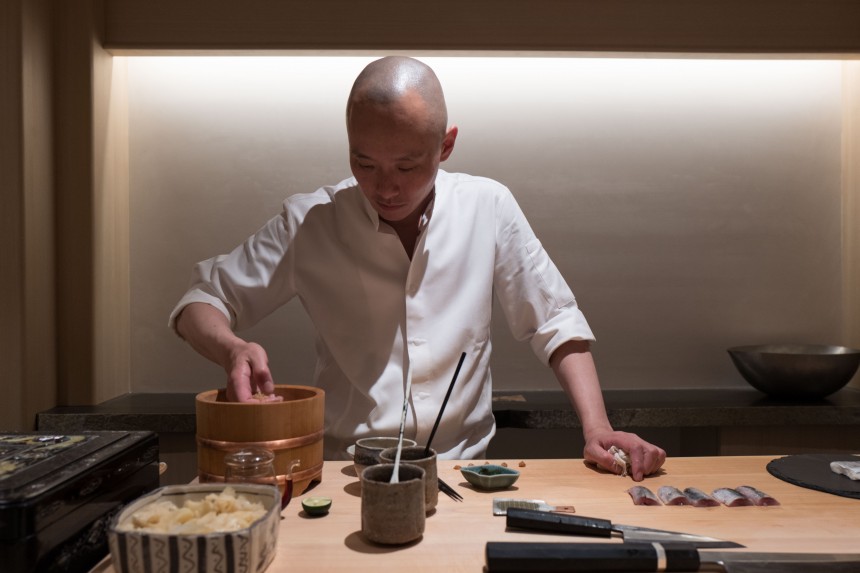 It should be noted that Sato’s counter is booked out quite a few months in advance, so if you would like to sit with him instead of one of the assistant chefs, you’ll want to reserve as early as possible. Seats can be secured via the Tableall booking service, and visitors can also book seats via the concierge services of high-end hotels.

Olivier Desmet is a San Francisco based photographer and writer who spends an inordinate amount of time in Tokyo taking pictures and eating sushi. Visit his photography web site at www.olivierdesmet.com and his sushi blog at www.thesushigeek.com