My journey to abandoned Hashima, widely known as “Gunkanjima” or “Battleship Island,” began with a plea to the Nagasaki government. Could I please, please, please get permission to go to the parts of Hashima that visitors aren’t granted access? The parts where journalists are sometimes dropped off, doting helmets, and are able to tiptoe around the crumbling city that had thrived with life just 40 years ago? More importantly, could I just please pretend I was Daniel Craig in Skyfall and pose for my own James Bond moment?

As a haikyo (“urban exploration”) enthusiast, no Nagasaki trip of mine was going to happen without a boat ride out to Hashima—located approximately 19 kilometers southwest of Nagasaki’s bustling port. Recently awarded UNESCO World Heritage status, the island has a rich history dating back to the 1880s, when Mitsubishi first excavated coal from the seabed underneath Hashima. Rather than shuttling workers back and forth to Nagasaki, a cramped community was built on the island. During its heyday, over 5,000 people made a life on Hashima’s 6,300 square-meters of rocky land. Yet it managed to provide all the comforts of mainland life, including a pool, pachinko parlor, and movie theater. 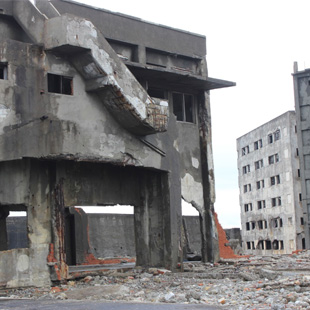 The island was evacuated in 1974, when gas became Japan’s major fuel source, and people rushed to the mainland for other work, leaving behind most belongings.

In recent years, the island gained notoriety when Skyfall used Hashima as one of its backdrops. These days, the only way you can step on the island—albeit a very sectioned-off portion of the island—is to join one of the four cruise companies that venture out there. Or convince the government otherwise.

Sadly, I had to settle for a regular tour along with the rest of lowly masses, weather depending. (Cruises are often cancelled based on the sea conditions.) I had arranged the tour with Gunkanjima Cruises (¥3,600), and at 9:10 on the dot, our cruiser set off with about 100 people in tow, all Japanese and all carrying ponchos in preparation for the rainy weather. Sitting on the upper deck, we did get a little wet, but it was hard to pay attention to anything with the loudspeaker blasting out historical information in Japanese … the whole way. (Tip: bring earbuds.)

After a rather unnecessary stop at Takashima—the island closest to Hashima—to use the toilet and listen to a short lecture about Hashima in front of a miniature replica, we finally spied the island on the horizon. It was significantly smaller than I dreamed, making the population density, which at one time was the highest in the world, even more impressive.

Our cruise did a slow lap around most of the island, letting us enjoy its inaccessible parts. From far away, the island truly resembled a battleship—thus the name—especially given the black soot covering most of the buildings. We docked up and passengers filed out, eventually gathering in an open area for yet another lecture. The boardwalk that tourists can visit is strictly fenced off with signs warning not to go beyond the railings. It took a lot of effort on my part not to happily flee from the tour group and risk deportation. Thankfully, we developed another strategy: lag way behind. As the lectures were entirely in Japanese—and since we were on this spectacularly photogenic island—it was easy to tune out and wander off. An attendant made sure to keep an eye on us, but we enjoyed the island on own own terms. 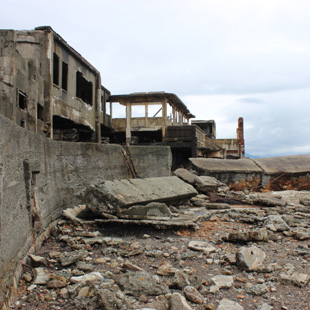 Though I was originally disappointed to not get special treatment, I was amazed with my surroundings: the skeleton of a mining shaft that took workers 600 meters underground; the conveyor belts that once carted coal; the concrete apartment windows framing mysterious objects within. It was fun to fantasize about this “lost” civilization and revel in the eerie quiet, punctuated by the sounds of waves and Hashima’s thriving bird population. One interesting insight we received was that the seawall is often breached; large waves have damaged the tourist boardwalk four times, including once last year. The guide pointed out where the metal poles had been ripped out of the concrete. I wondered, how long before the island crumbles entirely?

One last look at the island, while the other passengers sat, bored, waiting for the slow gaijin to get on the damn boat. “Could I please just stay overnight?” I asked a staff member, in vain. Laughs all around, and a gentle push separated me from their precious island … for now. I could always hire a certain secret agent.