Is CBD the answer to chronic pain?

Spending time with 32-year-old Jonas Duclos is like meeting a human whirlwind of passion. Youthful and slight, he speaks with such intensity and speed that it’s impossible to be bored in his presence. The Geneva native, who battles with serious and rare genetic disease PRP which attacks his skin and blood and causes excruciating chronic pain, is an outspoken advocate for the use of cannabis for medical purposes.

He’s lived a full life already – having spent years working in wealth management and private banking for Swiss investment firm UBS, he is also a keen skateboarder and most recently became the founder and CEO of JKB Research (which he runs with partners Bruno Studer and Kevin Goetelen). Multilingual and polymathic, Duclos can be seen as a kind of prophet for the benefits of cannabis and cannabinoid constituent CBD (Cannabidiol). JKB’s CBD outfit CBD420 manufactures and sells CBD products globally – and the response has been phenomenal, with the list of countries growing from month to month. Metropolis spoke with Duclos when he was in Tokyo researching the potential of the Japanese market, which is seen by many as a great opportunity for rich pickings.

“In terms of Japan (due to an aging population) there is muscle pain, arthritis and anxiety that somehow we can help with CBD so it’s a great opportunity for us,” says Duclos. “We’re able to find cheap solutions for those people.” Surprisingly for some, one of Japan’s most high profile supporters of CBD is Akie Abe – Prime Minister Shinzo Abe’s wife.

Duclos’ path to cannabis wasn’t strictly for recreational purposes. In his experience with an illness which still has a profound effect on his life, he found that mainstream medicine failed to alleviate pain and led him to find solace in cannabis use. Duclos says, “I’ve been let down by pharmaceutical companies because they can’t develop a solution for my disease so I had to find my own way. I can function now on a day to day basis thanks to cannabis.”

While not a scientist, Duclos has spent years researching cannabis and has inadvertently become something of an expert on the subject. “The doctor would prescribe heavy painkillers but it wouldn’t take the pain away,” he says. “And it also bring other problems with my stomach and so on. Cannabis was so much more efficient with my pain on a daily basis. When I was 17 I started really studying different experiences over the planet where people would use cannabis for medical purposes. And over the years I compiled a big catalogue of different pathologies that were possible to help with cannabis. I’m far from being a doctor however I do have 17 years of medical experience – but only my own experience. It’s basically through the internet and media that I’ve been able to study cannabis.”

The charismatic Genevan is also keen to put the record straight on CBD and the truth about the product. CBD420’s products have very little or no traces at all of THC, which is the compound in cannabis which makes people high. Cannabis is a curious plant in that even the world’s foremost specialists have no know real knowledge about many of its compounds. “We know that there is at least 550 compounds that we know of in cannabis. THC is the only compound that we know of which is a psychoactive compound – the one that makes people high. THC is also forbidden in Switzerland and most other countries in the world.” Duclos goes on to say that “the the only side effect of cannabis is through THC which can be anxiety inducing. It can lead to panic attacks and some mental illness but that comes from THC when the level is too high for the user. The World Health Organization, however, has recommended that governments don’t rule against CBD. Over the past 50 years no studies have proven that CBD is psychoactive or addictive. The Olympic Committee has also taken CBD off the banned substances list.” 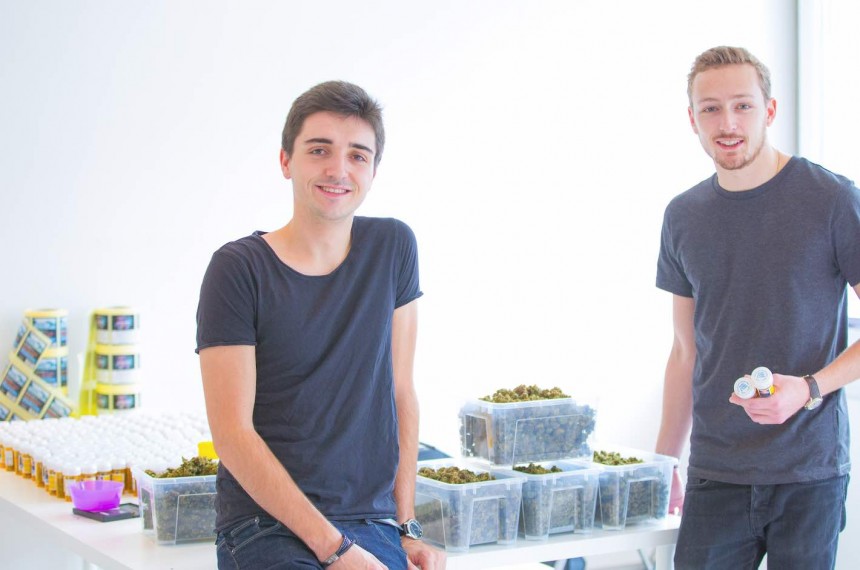 For Duclos, his work with JKB Research is ostensibly about helping people who need pain relief. As someone who suffers from serious pain on a daily basis, he’s sensitive to the needs of others – his CBD crusade really isn’t about making a profit. It’s about empathy with others and a desire to make people’s lives easier. There is a catch, however: due to draconian regulations CBD can’t currently be marketed as a medical pain relief product – something which seems to irk Duclos. He explains that, “because of the laws we aren’t allowed to talk about medical issues. This is due to the pressure from pharmaceutical lobbies. We are way too small to compete with them. For governments to rescind the law stating we can’t claim that CBD is used for medical relief – we have to prove that we can pay the same taxes or more taxes than pharmaceutical companies. That’s what we need to do to make a real change.”

Duclos is the antithesis of an aloof and profiteering CEO. He regularly contacts CBD users and communicates directly with them, sharing stories and experiences. He is keen to stress this involvement with his company’s customers and is clearly delighted when he hears positive feedback. “I’ve heard personally from many of our clients who thank us for helping them with their various issues,” he says. “It’s so clear now. Politically, for a government to go against CBD, a politician who does this is a politician that says – I don’t care about my people. The only negative side effect that we have identified in CBD is that, in high doses, it can make you feel tired. But a lot of our clients contact us complaining of sleeplessness so it’s a solution for some people.”

The CBD market is currently small in Japan but is growing with the main player being Australian firm Elixinol. Unlike most entrepreneurs Duclos embraces their involvement in the market and identifies them as being a business-like cohort. “Elixinol is a competitor but I’d like to see them more as an ally. It seems that they are doing a good job and they’re a very legit company. And we need actors like this in this market. We need them to showcase the good points of cannabis. We need actors like them to show that we are legit when it comes to paying taxes and complying with laws.”

In addition to entrepreneurship, travelling and enjoying Europe’s abundance of nature, Duclos is a skateboarding obsessive. While in Tokyo he enjoyed hooking up with amateur and pro skaters, hitting some of the city’s best skate spots – something he relishes. In Switzerland he heads OG Skate, the country’s largest skateboarding association. The skating community have universally embraced the use of CBD to alleviate pain stemming from cuts, bruises and other injury. Duclos, who travels around with his skateboard and looks more at home with it than a CEO’s leather chair, seems over the moon with the blossoming relationship between skaters and CBD products. A champion of CBD and empathy with others, he is philosophical when asked how he got to his current status. “Everything I’ve been through since I was 15 – skateboarding, my disease, cannabis, finance, and so on has led me to do what I’m doing today. It’s karma. It has all come together.”