Kei Nishikori’s transformation into a major contender for tennis’ biggest titles has been one of the year’s great sporting stories. But his stirring surge to the U.S. Open final may never have happened were it not for a series of chance conversations 12 months earlier.

Michael Chang is the only male player of Asian origin to have won a Grand Slam—and the youngest, having won the French Open in 1989 when he was 17. He was in Paris to watch the 2013 French Open when he bumped into Nishikori, then ranked 15th in the world. Three months later, a disastrous first-round defeat at Flushing Meadows sparked a period of soul-searching for Nishikori, who realized something had to change and decided to persuade Chang to become his coach. 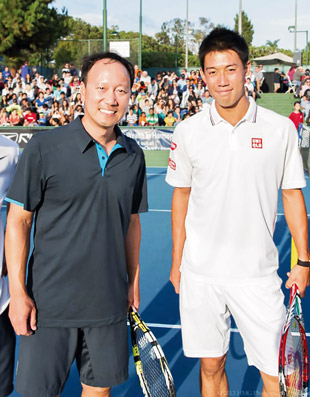 The chances were slim. Chang had distanced himself from professional tennis since his retirement in 2003 and had already rejected a series of offers. But against all odds, he changed his mind.

“Under normal circumstances, I probably wouldn’t have considered it,” Chang tells Metropolis. “Coaching isn’t really something I’d planned to commit to. But there haven’t been that many successful Asian players in the men’s game, and I felt Kei really had a good chance of making that next step.”

It was clear the partnership had potential. At the Australian Open this past January, Nishikori pushed his nemesis Rafael Nadal all the way in a tight fourth-round clash. In many ways, the deeply analytical Chang resembled his protégé: Both players relied more on quick wits and foot speed than brute strength. Chang also could get into his opponents’ heads, outwitting rivals through clever psychology and his mastery of counter-punch.

Before linking up, Chang already knew what Nishikori lacked: Self-belief. “Kei was obviously very solid technically, but to match those guys at the top and take the next step, he needed to be a bit more unpredictable and take a few more risks. To do that, he needed to improve his mentality. No matter how skilled you are, you need to be able to believe you can achieve something; otherwise, you’ll never get there,” Chang says, adding that Nishikori has since changed.

A growing belief, backed by wins against Djokovic, Federer and Murray, launched Nishikori into the big time. His clashes against Djokovic and Čilić in September broke pay-per-view records on Japanese TV, and a strong showing at the World Tour Finals saw him finish the season at No. 5—a career high.

Chang feels there’s more to come, with his charge still adjusting to new patterns and tactics in his repertory this year. Nishikori was urged to exploit both his speed and the geometry of a tennis court with the precision of a snooker player. It’s paid off, with even uber-flexible Djokovic struggling to deal with Nishikori’s subtle variation.

“It’s about flexibility,” Chang says, explaining that men’s tennis is varied. “You need options so you can switch between styles of play rather than just playing the same way. By freeing your style up, you become a tougher opponent.”

Chang hopes Nishikori will be a trendsetter for a new wave of Asian players. While Li Na’s success has inspired a generation of Chinese girls breaking through, he cautions it may take longer for men’s tennis to experience the same boom.

“It’ll take a little more time before we get more Asian guys at the top of the game—but I believe it can happen.”