The Wild Horses of Cape Toi

Meet one of Japan’s rarest breeds

There are few things as captivating as the unspoiled scenery of Miyazaki’s Nichinan Coast. Extending 100 kilometers southwards from Aoshima Island, the sawtooth coastline offers breathtaking views of the Pacific Ocean. At the very tip lies the enchanting Cape Toi: a beautiful, forested national park that’s home to a population of rare horses known as Misaki horses, one of eight breeds considered native to Japan.

From afar, the bay, brown, and black Misaki horses could be mistaken for ponies. Standing at just 134 centimeters, they are much shorter than other breeds, with heads that appear slightly oversized for their frames.

Introduced to Cape Toi after World War II, they’ve roamed its lush, green hills ever since. The first records of the Misaki in Japanese literature date back to 1697. The story goes that a family from the Takanabe Clan, the Akizuki, rounded up the feral herds in the area at that time to create a new, all-purpose working horse. The new breed of horse was used to work the farms and transport mounted shepherds.

In the years following the war, the demand for literal “horse power” decreased and the remaining Misaki population dwindled. Eventually, the horses were relocated to Cape Toi. The 90 or so that remain today, and their breeding grounds, are a designated national monument. 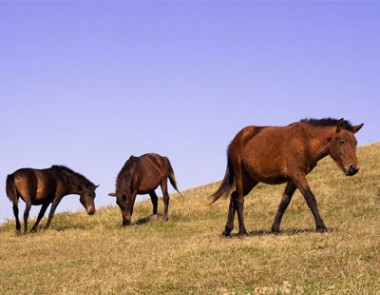 Hike through history alongside Misaki horses

The hills of Cape Toi rise high off the coast, offering unparalleled views from the top. It’s here that many of the horses congregate, grazing quietly on pampas grass and ferns. Visitors are free to observe the Misaki horses at a close distance, as long as they don’t touch them or approach from behind.

The horses have been raised for the last 300 years or so through year-round grazing—a method that requires little care and leaves reproduction up to nature. More information about the ecology of the horses and their habitat is available at the Cape Toi Visitor Center, which also offers guided tours of the surrounding landscape and historical buildings. 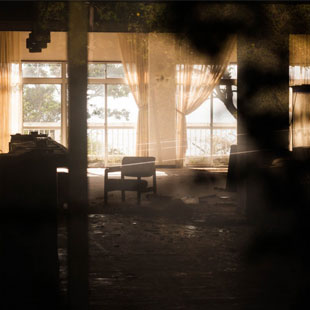 Visitors are also free to enjoy the many walking trails by themselves. These pathways wind around the cape up into the hills and through the forestland, which contains more than 3,000 cycad trees.

For the more urban explorer, Cape Toi is also home to at least two abandoned hotels, which have stood vacant since the 1980s. Horses can often be found hiding in the backyards of these desolate buildings, but since trespassing is discouraged, it’s best to proceed with caution.

Be sure to visit the Cape Toi Lighthouse—the only public entry lighthouse in Kyushu—which is perched atop a 255-meter high cliff. On a clear day, you can see all the way to the Osumi Peninsula in Kagoshima.

Every summer, Cape Toi plays host to the hugely popular Fire Festival. Legend tells of a local monk who killed a serpent that was terrorizing the town by throwing a torch in its mouth. Today, a 30-meter-tall pine tree is wrapped in straw to symbolize the snake, and torches are thrown at it from below. When a torch finally reaches the mouth of the tree, fireworks are set off in celebration. It’s a risky endeavor and injuries often result from wayward fireballs, but the excitement nonetheless draws thousands of spectators each year.

Train access from Miyazaki City as far as Kushima Station, via the JR Nichinan Line. From there, access by car—a 40-minute drive. For more information visit kushima-city.jp