In Tokyo, sometimes it’s possible to see skyscrapers and fast-paced, late-night living interwoven with a multitude of family-owned businesses, silent green spaces and local neighborhoods with village-like atmospheres. Senzoku in Ota Ward is one such place. From the highest points in the district, the beaming lights of Shibuya gleam beacon-like in the distance, yet in this piece of the Tokyo puzzle glorious green spaces, ancient pilgrimages and interesting city walks entice.

Connected to the rest of the city by the Tokyu Ikegami, Oimachi and Meguro lines, Senzoku is centered around the large, lake-like pond which gives the area its name. Translated as “feet-washing pond,” Senzokuike has been entwined with the area’s history for centuries. Today it is a serene spot, looped by roughly one kilometer of trail that is, particularly in the evenings and on weekends, frequented by joggers, wildlife watchers, fun-loving families and loyal dog owners. 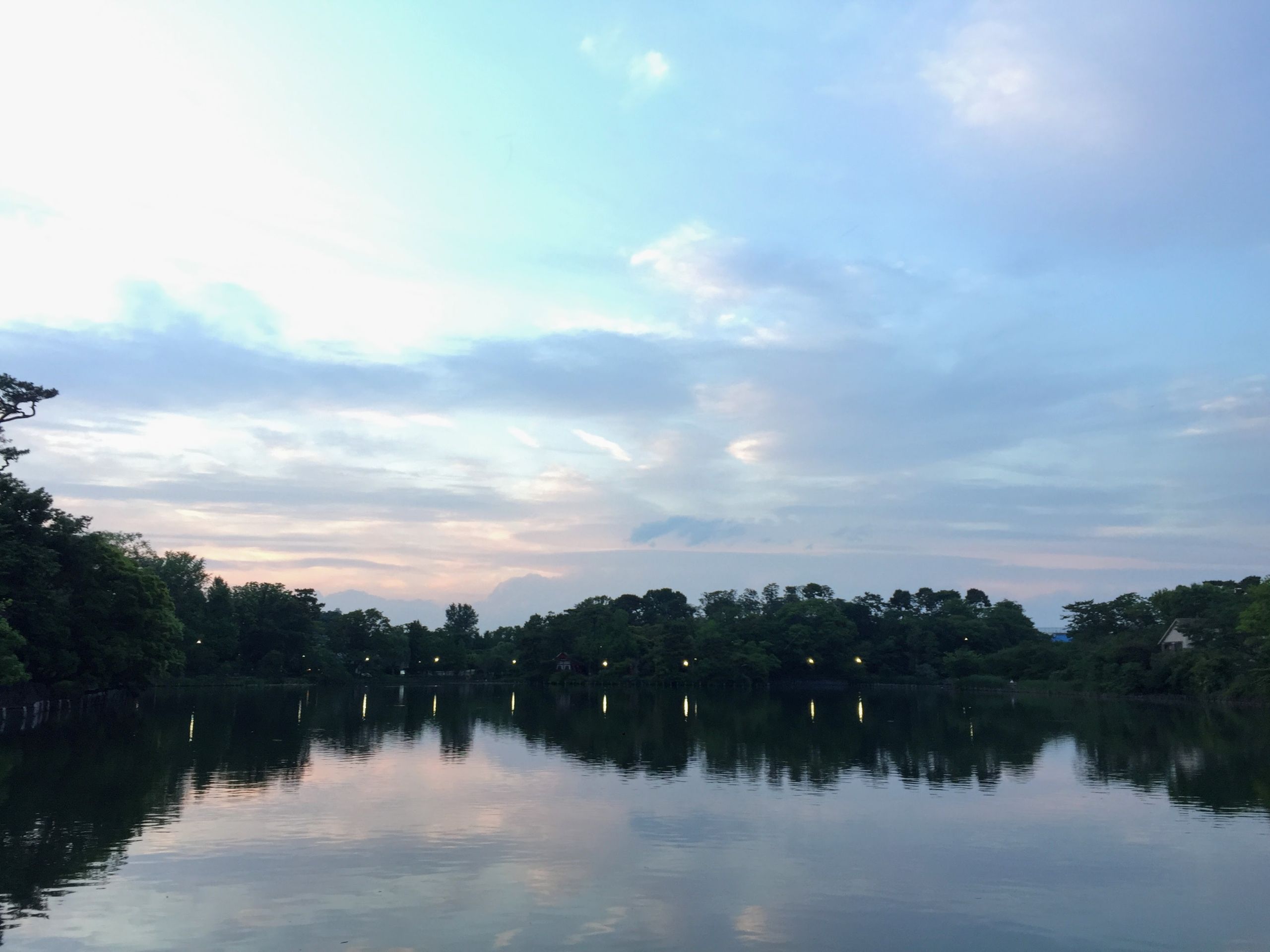 A famous Buddhist priest is said to have washed his feet in this pond during the 13th century.

Simply strolling around the water is a favorite pastime of the local residents, as is peering over the edge of the undulating Ikedzuki Bridge into the inky water below, where enormous koi swarm for food. Terrapins also cause a stir, as well as the springtime families of ducklings who draw crowds of people with cameras and emphatic calls of “kawaii!”

The name “Senzoku” dates back to the late Heian Period (794-1185), but has later connections to the 13th-century Buddhist priest Nichiren (1222-82). Nichiren’s beliefs were based on the Lotus Sutra, believing that everyone has an innate Buddhist nature and could achieve enlightenment simply by chanting it — which was somewhat radical for the time. Spending much of his life in exile, wandering, writing letters and spreading his teachings, Nichiren’s impact remains widespread, even beyond Japan’s borders. 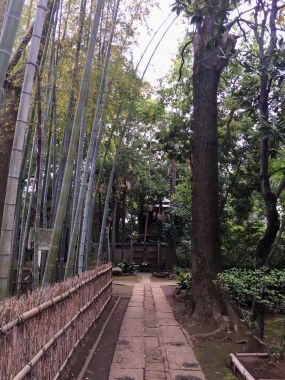 The walkway to Myofukuji Temple in Senzoku.

It was on the shore of Senzokuike that Nichiren is said to have stopped, hung his robe on a pine tree and washed his feet in the water. Utagawa Hiroshige alludes to this scene in an 1856 woodblock print called “Senzoku no Ike Kesagakematsu,” taken from his “One Hundred Famous Views of Edo” series, in which the famous tree itself is depicted.

On the east side of the pond, just past Ota Ward Library, is the old wooden gateway to Myofukuji Temple, through which tall bamboo welcome visitors as they clink in the wind. Entering into this realm of peace, the glassy pond can be seen in the distance through the trees. Old stones mark significant places along the path, many with Nichiren’s Lotus Sutra chant — “Namu Myoho Renge Kyo” — etched into them. The tree where Nichiren famously hung his cloak (kesagake no matsu, “robe-hook pine”), said to be in its third generation, is enshrined behind a short stone wall close to the water.

Even though nature is still abundant around Senzokuike, it’s hard to imagine that the neighborhood was once rural, used mainly by farmers to grow rice and wash crops. No river visibly flows into the lake. Instead, several small streams create the bulk of the water. In order to find the primary, now mainly culverted, source of the pond, you’ll have to walk around 15 minutes towards Ookayama to Shimizukubo Benzaiten.

Just make sure you turn around in time to make it back to Senzokuike for sunset. That’s when this waterside area becomes an even more tranquil slice of solitude among the streams of cars and commuter rushes to and from the city.

This secret, grotto-like shrine is surprising to stumble upon. Down the steps, a small bridge crosses over a pond to the modest shrine revering the spring, a trickling waterfall, behind it. If you visit in the late evening though, it seems that the gods have gone to bed because the waterfall appears to be switched off at night.

Here you’ll also find proof that, even with all of its metro stations and multi-level buildings, it’s still easy to hit the streets and discover Tokyo on foot. One of the best ways to explore is to find a walking trail and, at Shimizukubo Benzaiten, Ota City has provided visitors with just that. Signposted from here, the “Sakura Promenade” leads from the edge of Ookayama to the pond, and then under the railway tracks at Senzokuike Station.

On the opposite side of the station, a small shotengai (shopping street) splinters off into a more suburban scene. The rows of shops on either side of the street are inhabited by fishmongers, drugstores and dry cleaners, as well as a handful of restaurants and other additions. Cafe 634 fills the slot of “contemporary cool” in the neighborhood with its must-try anko-butter (red bean paste) toast perfectly paired with fresh brewed coffee; so does Patisserie AKANE’s hunger-inducing selection of baked goods. There’s also Caffè Santino, which serves a classic yoshoku (Western-style Japanese cuisine) combo of coffee, spaghetti and cakes. The cafe sits up high, overlooking the corner of the main street. Its large windows afford diners pond views, as well as some prime people-watching potential.

After filling up on food, there’s more of the Sakura Promenade to explore. From the Senzokuike train bridge, the path swerves off to the right and along a stream overhung with cherry trees. When the trees are in full bloom, the walkway is like a perfect postcard picture, with plenty of flower-viewing photo opportunities along the way. The route is signposted with floor tiles painted with cherry blossoms and the occasional board featuring historic pictures of the area back when it was rural fields and simple abodes. 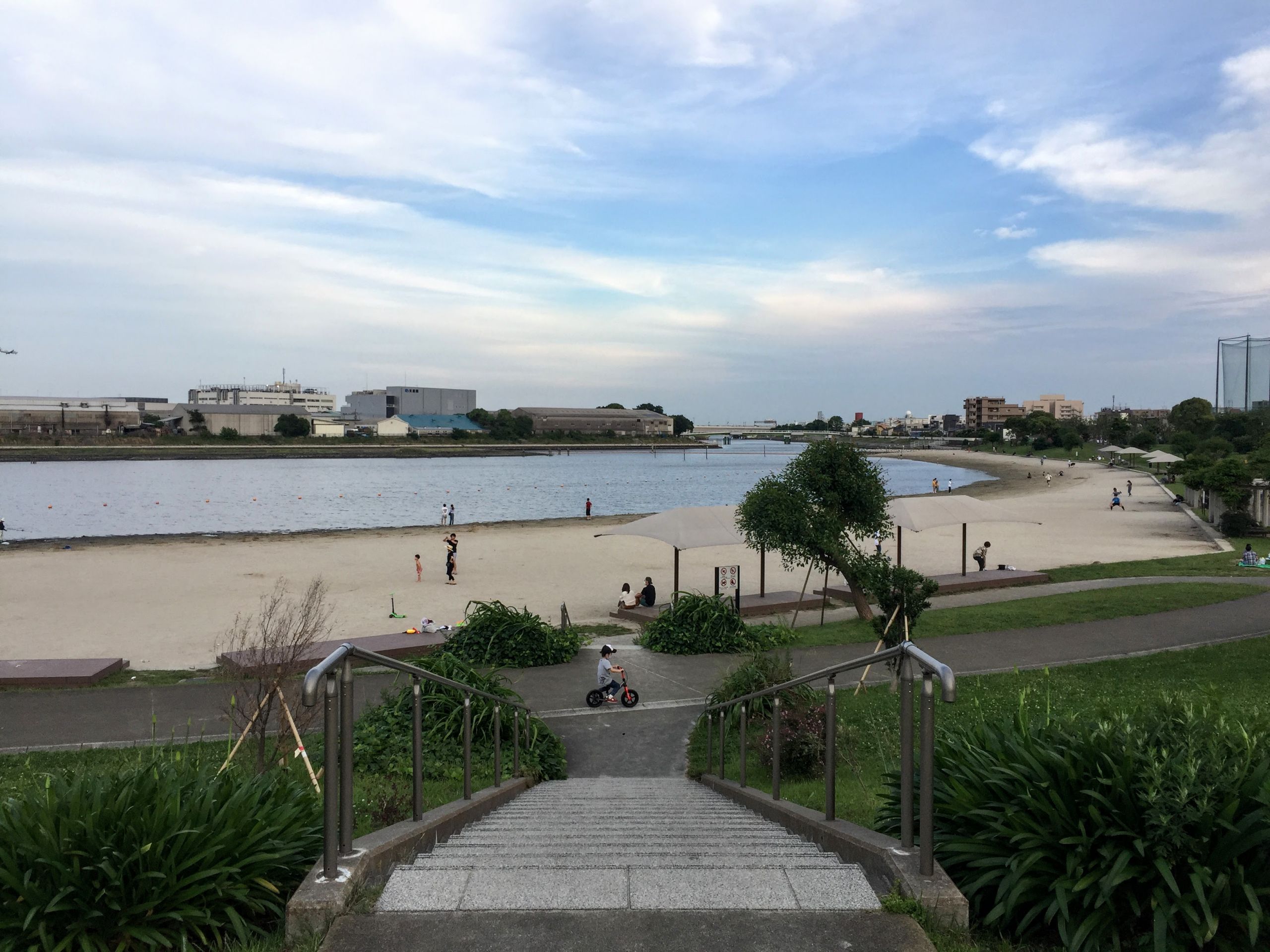 If you feel like heading on a longer urban adventure, following the Sakura Promenade takes you all the way to the sea. At 12 kilometers (7.5 miles), it’s a fair distance, but the keen city explorer will be rewarded with changing landscapes, from well-to-do family houses to large apartment blocks and then on to an urban, concrete riverway until you reach the sands of Omori Furusato-no-Hamabe Park. This city beach may be man-made, but it draws crowds on sunny days. Children paddle in a roped-off area of the sea and friends get together for picnics fueled by one too many chuhai (Japanese alcoholic drink), all while planes cruise overhead to land at Haneda airport. It’s not the most tropical of beach hangouts, but if you can ignore the industrial vista then it’s a quirky end of a journey for a city wanderer.

Just make sure you turn around in time to make it back to Senzokuike for sunset. That’s when this waterside area becomes an even more tranquil slice of solitude among the streams of cars and commuter rushes to and from the city.

Back at the pond, further around the eastern edge from Myofukuji Temple, the park is often bustling with parents chatting as kids catch bugs and scream in delight. Here, a wooden boardwalk hangs over the edge of the water, curtained by sprouting reeds that grow so high in the summer that it’s hard to see past them. As the seasons change, new flowers appear, irises pop up during the summer months and there’s also the chance to spot fireflies in the evening heat. From this side of the lake, if the weather’s right, the sun drops into the horizon and bursts like a blazing egg yolk across the sky.