The lanterns are lit, the food stalls set up, and the familiar cries of “Wasshoi! Wasshoi!” fill the air: it’s finally summer in the city. For locals all over the country, the arrival of summer is synonymous with the start of Japanese summer festivals, otherwise known as natsumatsuri.

As most know them today, natsumatsuri are occasions for people to gather and engage in traditional merriment. The girls come dressed in their best kimono, and children are buzzing to try their hand at scooping goldfish. What’s not as widely known is they’re primarily held as a means for religious communication between people and kami—Japanese deities. Marking a variety of things, they’re the main kind of celebration in Shinto, Japan’s former state religion. 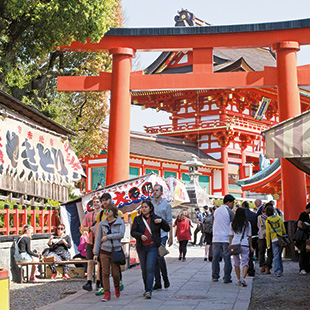 Some festivals mark seasonal events, such as the annual Sakura Matsuri in Tokyo’s Chiyoda Ward that celebrates the transient beauty of the cherry blossoms; other festivals celebrate historical events. Kyoto’s Aoi Matsuri is said to have originated when the Emperor made offerings to appease the divine spirits of the Shimogamo and Kamigamo shrines. The Sanja Matsuri in Asakusa is dedicated to the kami of three men who devoted their lives to the Buddhist faith and are now enshrined in Asakusa Shrine. Other causes for celebration include blessing and protecting crops, welcoming ancestral spirits, and celebrating the exploits of heroes.

Matsuri are typically divided into three major sequences: the kami-oroshi, kami-asobi, and kami-okuri. Most festivals follow this general structure, with few exceptions to the rule.

Kami-oroshi marks the starting point of the matsuri. The shrine is opened and the deity released, while priests perform a ritual to open the miniature doors of the mikoshi, or divine palanquin. The mikoshi is crucial to the festival as it temporarily houses the awakened spirit. It’s said that, during this stage, the kami awakens from a calm, dormant state; to an alert, dynamic one. Signifying the abolition of time and order, life regresses into chaos. 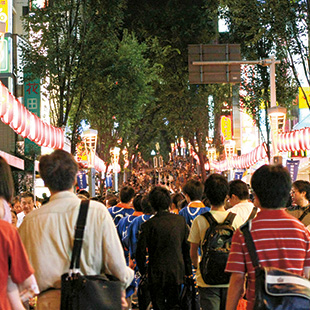 Kami-asobi literally translates into “deity entertainment” or the placation of the awakened kami through entertainment. This is the point at which the mikoshi, occasionally weighing upwards of a ton, is carried upon the shoulders of several sturdy men and paraded through the city. Bouncing and jostling the shrine is believed to intensify the power of the kami and therefore shower more good fortune, wealth, and happiness upon the people. The kami, safely enshrined within the palanquin, essentially visits the local community and blesses the homes of the faithful.

The most magnificent spectacles of natsumatsuri take place during this stage of the festival. Floating lanterns are sent downstream, skilled equestrians perform in traditional garb, and lavishly-costumed drummers pound taiko drums to a steady, rhythmic beat. This marks the restoration of time and order.

At the festival’s close, the deity is sent off in the final stage known as kami-okuri. The mikoshi circles back to its shrine, where priests must perform another ritual for the kami to return. Thus begins a renewed order: Life assumes its normalcy.

Natsumatsuri offer a window into the traditional culture of Japan, where the relationship between the gods and people reaches its culmination. They’re also opportunities to strengthen the communal bonds among Japanese locals and foreign visitors alike. An occasion for offering thanks and praise, these ritualistic and festive displays are not to be missed!

A blur of bright colors and sounds, the festivals stand as testament to the hours its performers have spent planning and rehearsing for the big day. Join in the celebratory spirit overtaking hundreds of people and don’t miss out on a prime excuse for merrymaking!