On The Trail To Rebuilding

One man’s 614km walk in Tohoku

Robin Lewis’s journey started six years ago, right after Japan’s March 11 triple disaster. Just finishing his degree in business at a university in Scotland, he watched in horror along with the rest of the world as the tsunami devastated Tohoku and the meltdown of the nuclear power plant filled the news.

“My parents were living in Tokyo at the time, and a few weeks after the disaster, I went straight back to Japan. I wanted to do something to help,” Lewis says.

By April 2011, he was in Tohoku volunteering as a bilingual coordinator with Peace Boat in Ishinomaki, one of the cities hardest hit by the disaster and where the non-profit organization had set up a temporary headquarters for disaster relief work.

“I didn’t know anything about disaster relief then,” Lewis says. But from April to August of that year, he and the organizations’ more than 13,000 volunteers helped the people of Ishinomaki take some of their first steps toward rebuilding. The Japan National Council of Social Welfare estimates that 182,000 people, Japanese as well as foreigners, came to help immediately following the disaster. (That number, however, does not include volunteers unaffiliated with a group or efforts outside the region to support those affected.)

After his volunteer stint ended, Lewis spent about a year working in the private sector, but found it wasn’t satisfying enough. By August 2012, Lewis was back at Peace Boat as part of the organizations’ disaster relief and mitigation team. Building on that first experience in Tohoku, he helped in Haiti, Nepal, the United States, and Vanuatu, an island in the South Pacific, but Tohoku stayed on his mind. 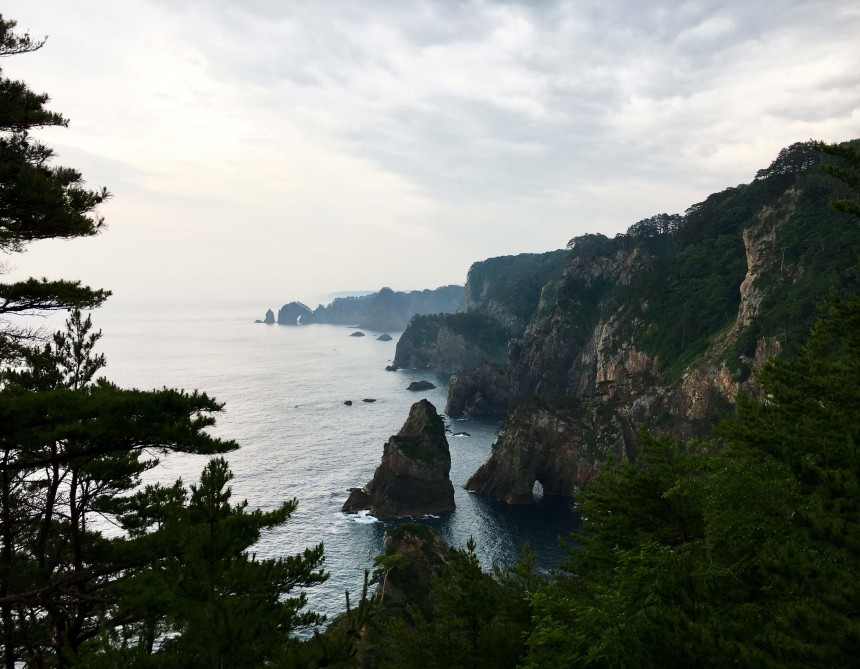 Tohoku,” Lewis says, “was a big turning point in my life.”

So, this summer, Lewis, with the support of the Japan Foundation Asia Center and The Next Challenge, undertook a 614 km walk on the newly constructed Michinoku Coastal Trail that runs north to south from Hachinohe City in Aomori to Soma City in Fukushima. Part of Sanriku Fukko (Reconstruction) National Park, the trail takes hikers along some of Japan’s most stunning seaside cliffs and through the towns and villages most affected by the disaster that dot the shore. When completed, it will be one of the longest walking trails in Japan.

While it is possible to cycle or drive the route, Lewis opted to go on foot, covering roughly 22 km a day for nearly 30 days. He reasoned that traveling this way made room for the spontaneous encounters that occur on such a journey and would allow him the chance to take a close look at what is happening in the region. 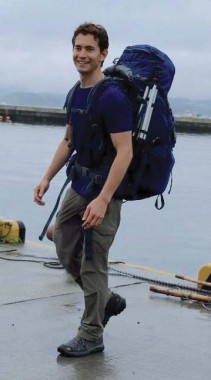 “At first, I thought that sounded easy, but the heat and my 26 kg pack made it a lot more challenging,” he says. A relentless heat wave swept the country at that time, and some days the temperature reached upwards of 35 degrees Celsius (95 degrees Fahrenheit) without a cloud in the sky. Lewis typically got up somewhere between 3:30 a.m. and 4 a.m., packed up his gear and started walking to take advantage of the coolest part of the day. Then he would take a break for a few hours and start walking again in the late afternoon or towards dusk when temperatures began dropping once more.

“That was my strategy anyway,” he says, with a laugh, “but it didn’t always work out that way.” Both the trail and the park are relatively new, established in 2013, which means construction is still underway. Lewis sometimes found after walking for hours that the trail simply ended, and he would have to double-back and find another route.

Other times, his delays were more pleasant: long conversations with local people he met along the way, offers of food or drink that he couldn’t refuse, and multiple invitations to stay in homes. Even though Lewis had spent considerable time in Tohoku before, he was still amazed at what he found.

“I’ve probably been to over 70 countries,” he says, “but the hospitality I experienced in Tohoku was the best. They say that the people there are somewhat shy, but I found the opposite. I was expecting kindness, but nowhere near what I received. I’ve never experienced anything like that before.” 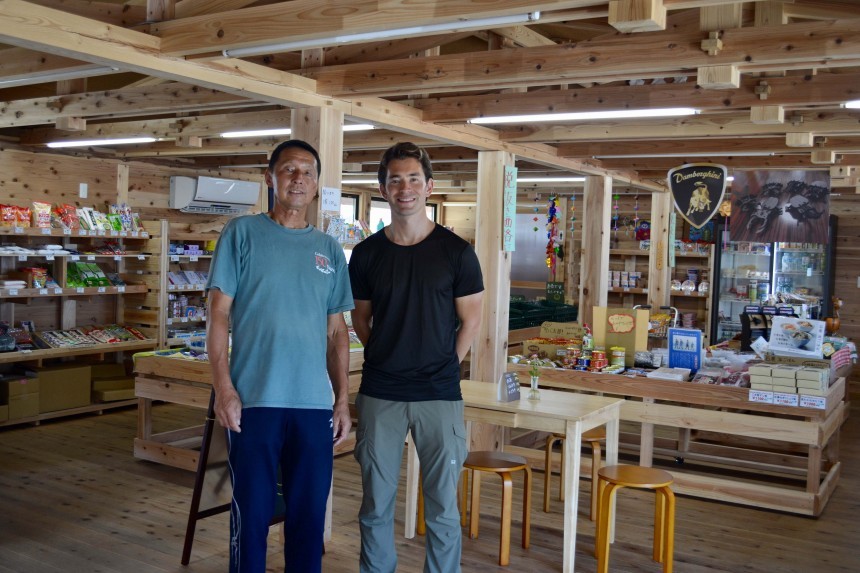 “For a time, Tohoku was all people talked about, but now it has gone very quiet,” says Lewis. “There isn’t much information out there, especially in English, and I want to change that.”

Along with stunning scenery, Lewis saw a landscape still very much in transition six years after the disaster. Large swaths of land remain a massive construction site, and dump trucks laden with construction materials regularly travel the roads. People, he says, are still very much working out how to rebuild their communities, lives and livelihoods: an 80-year-old fisherman who twice lost his home to a tsunami; two grandmothers who lost children in the disaster; a man who recently opened a small shop that is now a community focal point; and a young hoya (sea squirt) fisherman trying to restart his business centered on this local delicacy.

He also met a handful of young people who moved back to their hometowns because of the earthquake or came from other parts of Japan to take up life and work there. “There is an outflow, but there are also people coming in who want to make a difference.”

While he concedes it is something of a cliché, Lewis developed a deep admiration for the ability of the people of Tohoku to cope with adversity. Nearly 16,000 people are estimated to have been killed in the disaster, the nation’s largest peacetime loss of life. Roughly 150,000 were displaced by the nuclear disaster, and many remain in temporary housing.

Yet, Lewis says he witnessed a resiliency that deeply touched and affected him. 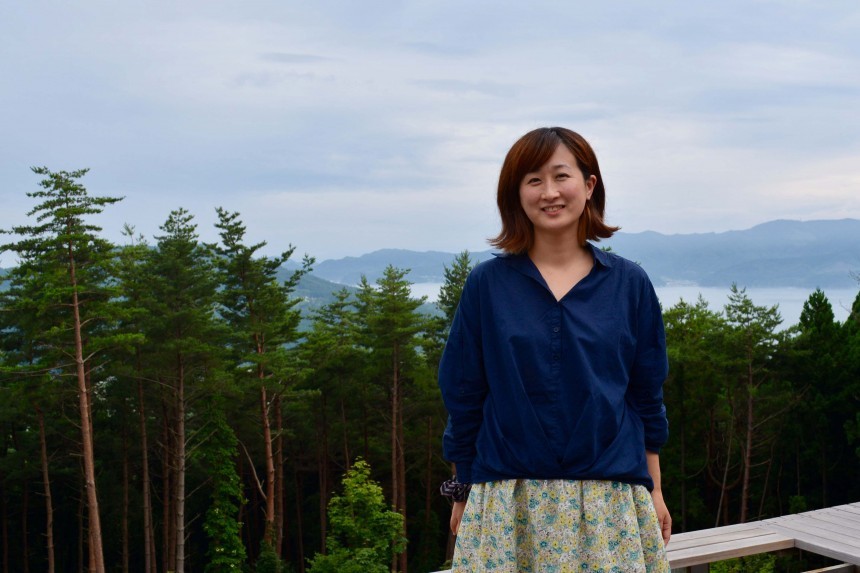 “People would say things like ‘Because of the tsunami, I was able to dream new dreams.’ Or ‘Because of the earthquake and tsunami, our town became more international.’ Individuals as well as whole towns have a new outlook.” That is what really inspires him.

“This trip was a life-changing experience for me,” he says. “The people there went through so much hardship, and we have the ability to learn from their experiences and stories. I hope to go back again.”