So fresh and so clean in Tokyo’s Little Korea

Japanese interest in Korean culture began with the Korean drama Winter Sonata, which became a huge hit in Japan beyond all imagination. Many middle-aged women fell in love with the drama’s male lead actor Bae Yong Joon (popularly known as Yon-sama) and started to explore the culture on their own: learning Korean, trying Korean food, and visiting Korea. Since then, the interest in Korean culture has only grown, especially due to the popularity of the country’s pop music.

If you’re living in Tokyo, getting on a plane and hopping on over to Seoul is quite easy. But if you’re unable to go, whether it be for financial reasons or not having any holidays coming up, the next best thing is to make a visit to Tokyo’s Koreatown, Shin-Okubo. It’s kind of like walking down a street in Hongdae or Myeongdong: a bundle of cosmetic stores, restaurants, and Korean pop music stores.

Having access to Korean food is probably the best part of Shin-Okubo. Among foreigners, the most well-known Korean dishes are bibimbap (rice mixed with vegetables, meat, egg, and spicy pepper paste), bulgogi (marinated meat), ddeokbokki (spicy rice cakes), and kimchi (known in Japan as kimuchi). Less commonly known is that Korean Chinese cuisine is a Korean favorite, especially for delivery. The usual order includes jjajangmyeon, jjamppong, and tangsooyook. 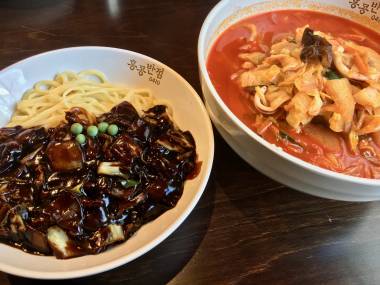 Jjajangmyeon and jjamppong are both noodle dishes, but the former uses savory, black soybean paste and has diced pork, onions, and cucumbers. The latter is a spicy soup with seafood. Some people have such a hard time deciding between the two that restaurants sometimes serve both at the same time, using a split bowl. Tangsooyook is deep-fried pork or beef that is covered in a delicious sweet and sour sauce. The best place to go for these three mouth-watering dishes is 香港飯店 (Hong Kong hanten), the latest in a hugely popular chain of restaurants started by the Korean chef Baek Jong Won. It’s a five-minute walk straight down the road from Higashi-Shinjuku station.

After your meal, go explore the skincare stores and try not to get too overwhelmed by the number of stores and products. Korean skincare products rose to global popularity in the last couple of years, especially because of the “10-step skincare routine.” The 10-step skincare routine has become a crucial part of stores’ branding techniques, with fabulous results: sales for the online skincare stores such as Soko Glam and Peach and Lily grew immensely, and Sephora recently touted the Korean skincare products at their stores. 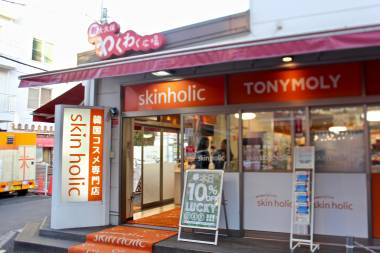 This famous routine is believed to be the source of the notorious dewy, youthful skin among Korean women. Two truths to know about this is that 1) not all Koreans have the time or energy to follow this routine every day and 2) the reason the routine works is because it provides a lot of hydration for your skin. You don’t need to follow the full regimen to get results; begin by incorporating the steps you think are most essential for your skin and be diligent with the products you use. Don’t expect to see any sort of transformation in such a short period of time and do follow your routine regularly.

One of the better skincare and makeup stores in Shin-Okubo is called Skinholic. While Skinholic is certainly not the biggest cosmetic store in the area, they have many popular items from a variety of brands. If you’re a fan of the products and will be there again, make sure to grab a points card to use for every purchase.

Once you’re done gazing in wonder at the sheer number of items or trying to keep yourself from buying everything, eat the perfect dessert for the colder months. Right outside of Skinholic is a small street food stall known as Jongro. Purchase a ticket at the machine for a hoddeok, a delicious pancake-shaped dough filled with melted cinnamon, honey, and sugar that’s fried right in front of your eyes. Enjoy your treat as you continue browsing the alley. If you’re interested in trying out Korean snacks or want to grab some ingredients to make your own Korean dishes at home, there’s a nearby supermarket you can go to. You’ll know you’re at the right place when you spot all the people crowded around the produce outside and even more people inside milling about.

We recommend you visit Koreatown on a weekday if possible, because on weekends, it’s just packed with people.