Anyone who’s studied theatre or performance will have come across New York’s legendary The Wooster Group. Actors such as Willem Dafoe and Spalding Gray were some of the founding members and the collective, since its inception in the late 70s, has been at the forefront of American and global experimental performance.

The Wooster Group, led by highly influential director and founding member Elizabeth LeCompte, came to the Kanagawa Arts Theatre at the end of September. Their tour of Japan continues as apart of the Kyoto Experiment 2018: Kyoto International Performing Arts Festival with The Town Hall Affair — a multimedia and polyphonic re-interpretation of a real life 1971 debate focusing on women’s liberation and a 1979 documentary film based on the debate titled Town Bloody Hall.

Metropolis held an email interview with director Elizabeth LeCompte regarding The Town Hall Affair and what it’s like to perform a feminist production in the middle of the #MeToo movement. 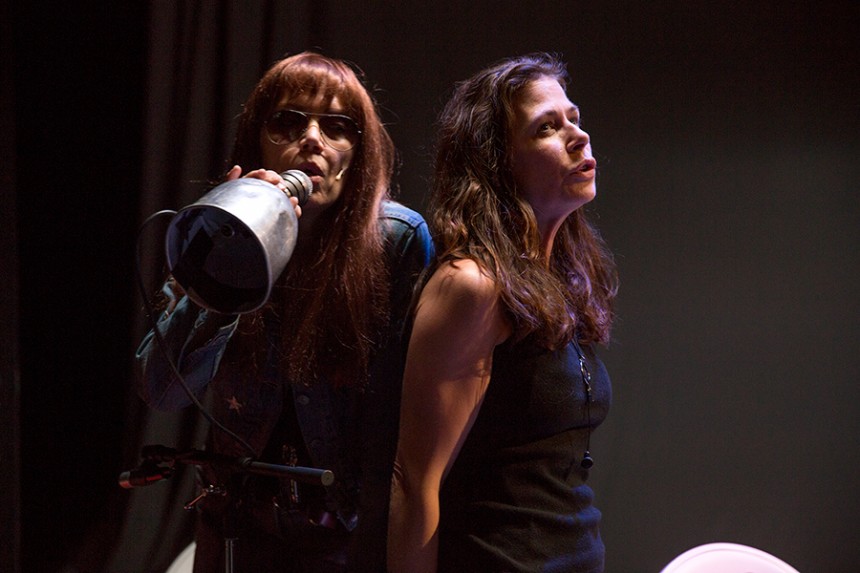 Metropolis: The Town Hall Affair is a controversial piece. Men vs Women and the feminism and lesbianism of Greer and Johnston vs the machismo of Mailer. It seems very apt to bring this production to stage in the era of Trump and the #MeToo movement. Perhaps little has changed since the 70s? Do you think that is the case?
Elizabeth LeCompte: I’m glad the piece is “apt” now, but really we began working on it before the #MeToo movement. The documentary Town Bloody Hall was brought to me by Maura Tierney, and I was interested that she wanted to do something with it. As I do with all my theater pieces, I entered into it by setting aside all my preconceptions about the material. As to the question of what has changed since the 70s: well, some things have changed, and some haven’t. I’m really interested in what’s happening now. I assume this piece brings the question of what has changed to our audiences, and I am interested in hearing back from them.

M: Was it difficult condensing the essence of a three and a half hour panel discussion from 1971 to a one hour production in 2018?
EL: I made some very quick editing decisions. You see, we were up against a deadline to complete a work for an engagement in Europe. I immediately knew which sections I wanted to stage, and I also knew that I wanted to frame our piece with the writings of Jill Johnston. Of all the panelists, she wrote the most extensively about the event in a very personal way. She was conflicted as to what she was doing there at all and whether or not her plan to disrupt the event was a success or a failure.

M: How do you think Japanese audiences will react to the production? Is it important, as an actor, to witness the different reactions to performances across the world?
EL: I never try to predict how audiences will respond. I am always fascinated to find out. I am at every performance, and each audience is very distinct. And in The Town Hall Affair, the audience in the theater experiences another audience: the original audience who were at the Town Hall event in 1971. That original audience has an important presence in our piece. We use the audio from the documentary Town Bloody Hall to create a frisson between the original audience and the audience now.

M: You said in an interview, “no one gives us money. We don’t make art that can be invested in. It goes away, and we’re political in a way that’s a problem.” Is it difficult to make “experimental” or “avant-garde” theater in this day and age? And do you enjoy the ambiguity involved in this kind of performance?
EL: It is increasingly hard to support an ensemble for long-term collaboration. Funders have changed their focus. They used to support ongoing ensembles directly. Now they focus on funding individual projects. That means that in order to keep our ensemble together, we must work on several projects simultaneously. I used to be able to spend two years making one piece while touring completed works. Now I am working on two new pieces at the same time as well as touring. Hard as it is, I still enjoy it.

M: The Town Hall Affair uses film and TV and use of multiple voices and characters (two actors playing Mailer while Mailer himself is on various screens). Was there a reason for this?
EL: I can’t give you a single reason. I do what I love. Also, a lot of my artistic choices start from pragmatic considerations. In the case of the two Mailers, I had a problem to solve. When we began work, I did not know the availability of our two leading actors, Ari Fliakos and Scott Shepherd (they both work outside the company sometimes). So I doubled them both in the one role as a safety measure. I fell in love with the doubling, and I had to have them both playing Mailer. Then I discovered the fight scene from Mailer’s film Maidstone, which we recreate in our piece, and I thought how fun it would be to have Mailer wrestle himself literally.

M: And a quick question about Japan. Have you been to Japan before? Do you have any thoughts about Japan? Or a quick message for your Japanese followers or theater-goers?
EL: I had the good fortune to visit Tokyo in 1986 and see the Grand Kabuki theater. Years later, I visited again and saw a geinin troupe perform. More recently, in 2015, The Wooster Group performed our piece Early Shaker Spirituals in Tomoyuki Arai’s festival Sound Live Tokyo. It is a thrill for me to be back with our company performing our work again.