Earlier this month the Tokyo Government signed a tourism promotion partnership with New York City in an effort to bolster travel between the global capitals. Tokyo Governor Yuriko Koike was in attendance at the Tokyo Metropolitan Government Building signing. She expressed her desire for the collaboration between mega-cities to bring more visitors to Tokyo.

The promotion partnership comes as part of a push to brand Tokyo as a travel destination in the lead-up to the 2020 Summer Olympics. Last year marked a record 24 million tourists entering Japan, according to the Japan National Tourism Organization. That number is nearly quadruple the 6 million that visited a decade earlier in 2006. If you’ve noticed a boom in gaijin on the streets of Shibuya and Harajuku this year, keep in mind that number will continue to rise until 2020.

The ongoing question for the Tokyo Government is to how translate the Olympic tourist boom into long term growth for the industry, according to Kyoichi Ikeo, a professor of marketing at Meiji Gakuin University who led a panel on the topic at the partnership signing. Turning first time visitors into repeat visitors is an important step in that process, he said.

As part of their tourism growth efforts, the Tokyo Government began a rebranding campaign in April with their “Tokyo Tokyo: Old Meets New” ads, which juxtapose Japan’s most traditional and most innovative attractions and industries. The ads are expected to reach markets in over 20 countries. 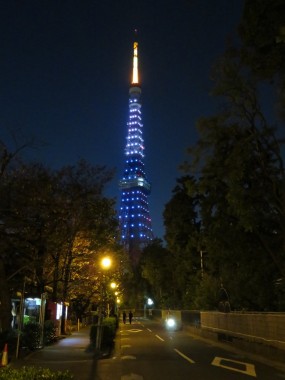 The latest step in this rebranding, the New York City partnership will put “Tokyo Tokyo” ads at bus stops, public Wi-Fi stations and on social media in Manhattan and the five boroughs. Flooding the city with images of geisha next to anime figures and kabuki performers next to robots, the hope is to draw New Yorkers to Japan via its capital.

In turn, New York City’s own ad campaign will find a home in Toei subway car banners and station posters, as well as Toei bus stops. Keep your eye out for “NYC Famous Original” posters in the coming week.

Perhaps the most visible part of the promotion took place in each city’s most iconic location, a few hundred meters above ground. The Empire State Building projected the “Tokyo Tokyo” campaign’s color schemed onto its building the night of the signing. While Tokyo Tower hosted the New York City flag’s colors to celebrate the same.