I ask the political economists and the moralists if they have ever calculated the number of individuals who must be condemned to misery, overwork, demoralisation, degradation, rank ignorance, overwhelming misfortune and utter penury in order to produce one rich man.

For 42-year-old Daisuke, helping Tokyo’s homeless is more than just an act of charity. “I was homeless myself for seven years and can understand how they feel. Some of the older men encouraged me to try to leave that life saying I was still young, so I want to give something back,” he says.

It has been over eight years now since he lived on the streets and he has been a committed volunteer for the Tokyo Spring Homeless Patrol for the last five, regularly joining their Sunday evening patrol around Shinjuku to hand out essentials to those in need. 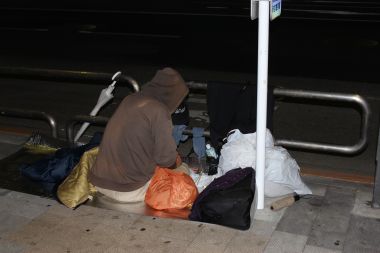 The participants change every week, but it is usually primarily made up of international volunteers who assemble in front of the Odakyu entrance on the west side of the station, carrying an assortment of goods to hand out during the patrol, including yakisoba, rice balls, sandwiches, canned food, sweets, bananas, batteries and cigarettes.

Tokyo Spring leader Sulejman Brkic, originally from Bosnia, has been helping the homeless in Tokyo for over 15 years and says that, since the pandemic, there are now more homeless people on the streets.

“We’ve had to give out more food, that’s how we know,” says Brkic. “We’ve noticed a few more younger faces and more women than before the pandemic.”

According to Brkic, when the coronavirus first arrived they didn’t know what it was or what to do, so they suspended their patrols for a couple of weeks.

“But even [suspending services for] barely two weeks didn’t feel right,” says Brkic. “The only word I can think of to describe my feelings is, well, embarrassing. So, that’s it? I thought. The shit hits the fan, screw everyone, run for safety, save your own ass… No, that isn’t right, that’s not what solidarity is about.

“We actually decided to ask the homeless themselves what they wished after explaining to them that we risked infecting each other. They wanted us back. I clearly remember one homeless lady who was pretty angry. She said that everybody stopped coming and nobody was getting anything around JR Shinjuku west exit. We went back with masks and gloves — and masks for them as well.” 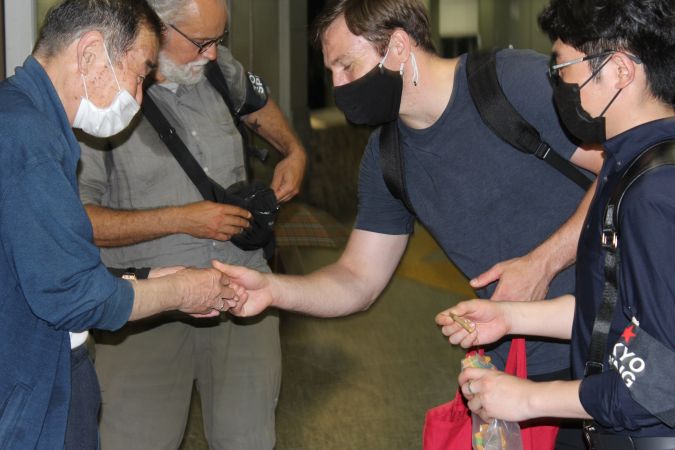 Tokyo Spring leader Sulejman Brkic (left back) and volunteers Brett Mulvihill (center) from the US and Wang Zhanming (far right) from China hand out supplies to a homeless man (far left) near the West Exit of Shinjuku Station.

Solidarity is important to the ethos of Tokyo Spring who are not simply a charity, but a left-wing, anti-capitalist, direct action group.

“We take sides. We do this because the Japanese government and the Japanese population at large don’t care. Everyone involved in this group is making a difference,” says Brkic.

Daisuke first became homeless about 15 years ago when he moved to Shinjuku to look for work after losing his job in Chiba. He had to leave the company dorm and was unable to afford an apartment, so he lived in internet cafes while applying for jobs. However, he says that companies wouldn’t employ him without a fixed address. Eventually his money ran out and he had nowhere else to live but the streets.

He was unable to reach out to his family for support at this time as people so often do when they are desperate. He was raised by a solo mother, but she passed away when he was in high school and, although he had an older brother in Chiba and one in Hokkaido, he didn’t have the means to communicate with them and the relationships deteriorated.

“In the beginning I didn’t know anything about how to exist as a homeless person or the homeless life,” says Daisuke. “I never slept at night and I would walk around and around Kabukicho all night. Then, when the station opened after 4am, I would go in and sit on my luggage and briefly nap. That lasted for about one year and I never really talked to other people during that time.”

Eventually, Daisuke was approached by a scout for a construction company who regularly recruits people from the homeless population around Shinjuku Station. There is a long-established practice in Japan of murky construction companies, often with Yakuza links, who hire desperate homeless men as day laborers. The men are paid very low wages to do jobs that no one else is willing to do, and the exploitation goes largely unchecked because this hidden labor force is so powerless.

Daisuke did this work for about four years, and says he was usually paid around ¥60,000 for 15 full days of work — after deductions for expenses, such as a dormitory. Ultimately, he was unable to continue with this work because he didn’t have the physical strength for that type of labor.

Back living on the streets full-time again with no income, he lived off of cup ramen bought with change found in vending machines and food handed out 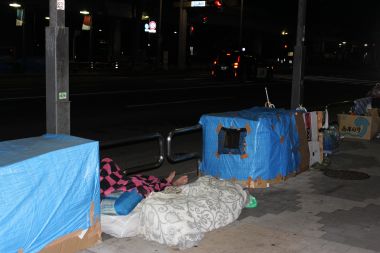 by volunteer groups. Although he never starved while homeless, he sometimes had no choice but to shoplift food from convenience stores in order to eat, and once spent a whole month in police detention after being caught stealing sandwiches.

Reflecting on his state of mind at the time, Daisuke says he was overwhelmed at how meaningless his life felt. “What is the purpose of my existence? For what reason am I living? Is there any reason to be alive? Wouldn’t it be better if I died? That was the level of my thinking at that time.”

Eventually, through his interactions with volunteers, he was introduced to a Shinjuku Ward-run consultation and support center for homeless people, and he was able to see a psychiatrist.

“I wanted to die.” says Daisuke. “So I was taken to a mental clinic and the doctor who encouraged me to get seikatsu hogo (public assistance for livelihood protection).”

Seikatsu hogo is Japan’s version of social welfare, but there are many barriers to receiving it, especially for the homeless. One seems to be a lack of readily available information about the benefits system and Daisuke says he simply didn’t know about it at first, then thought he would be too young to get it.

“There are also cases where people are ashamed and so don’t want to talk to people about their situation,” Daisuke adds. “In my case, I just didn’t know.”

After receiving help, Daisuke moved into a homeless shelter, where he lived for six months, before moving into a share house with separate bedrooms — where he currently lives.

58-year-old Matsubara lives in a cardboard house in one of the narrow alleys running into the west side of Shinjuku Station. He also believes the application process for welfare in Japan is problematic.

“The government asks for too much detail,” says Matsubara. “If you have 10 children, they will call each one and ask if you can do something for your father or mother. No one likes a situation like that! People don’t want others to know they are homeless due to shame.” 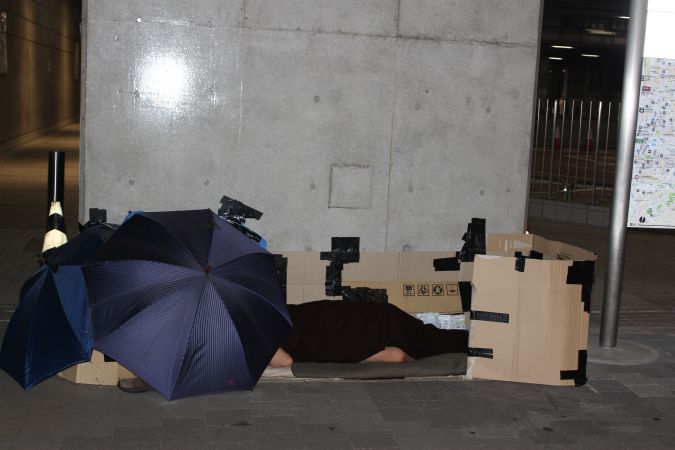 Matsubara can’t remember exactly how long he has been homeless for, but mentions it has been a very long time and has witnessed the changes in Tokyo’s homeless community.

“After the Lehman Shock, there was an increase in the number of homeless who are around their 30s and 40s,” says Matsubara. “Now with the coronavirus, the situation is worse than before and people without work have increased — there are even people only in their 20s who have no money. Many of them are sleeping in places where the volunteers don’t notice them, so they don’t meet anyone who can help.”

Tokyo Spring Homeless Patrol – distributes essentials to the homeless in Shinjuku on Sunday nights, Ueno on Wednesday, and two to three days per month along the Tama River.

To find out more information about volunteering or donating to TSHP, please contact the group’s leader Sulejman Brkic at the email address:
directactionddd@gmail.com or visit their Facebook page for more information. 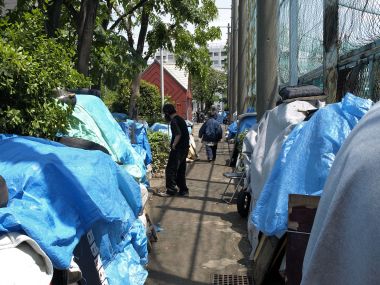 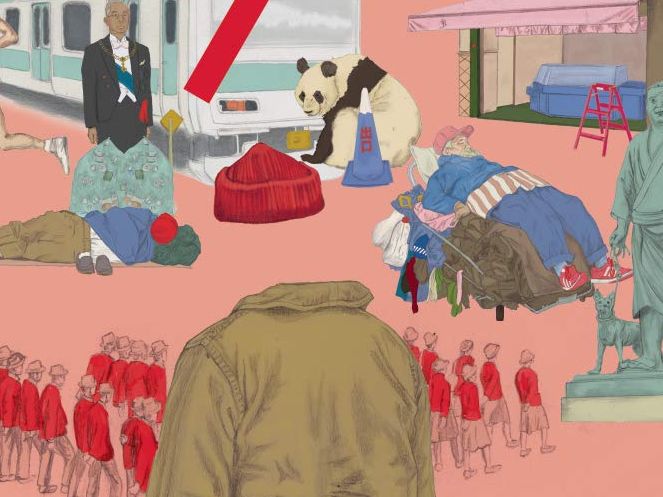 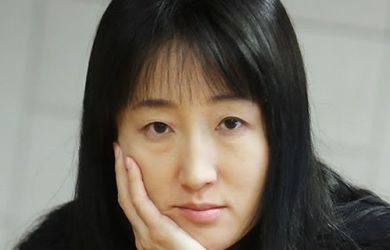