Flavors of India in Ogikubo

When you’re looking for a good curry, there are several things to consider. The first question is, of course, Japanese-style or Indian? If Indian, then from what region? Some days I crave naan, others I crave dosa—that will determine my destination. Otherwise, recommendations from friends and reliable sources, like Paul Nadasdy’s ace website justinmycurry.com, are helpful. Recently, one new curry shop caught my eye this way. After popping up on my Twitter feed, Toraya Shokudo’s colorful presentations and positive reviews were just too hard to resist — especially since it was covered by the food magazine dancyu, which has never led me astray.

The restaurant is a few minutes’ walk from the north exit of Nishi-Ogikubo Station. I was delightfully surprised to learn that the first customer of the day gets to pick how the medu vadu (savory donut) is seasoned, either with fennel or cumin seeds. I opted for cumin.

As the restaurant was quiet that day, I had a chance to hear the story behind the establishment. Toraya Shokudo opened this February, after an invitation from the owners of Tobiuo Kitchen, a dinner-only affair, who were not using their restaurant space during lunch service. Tobiuo Kitchen serves Sri Lankan cuisine, which was convenient as there would be no conflict between the aromatic spices used for each respective menu. Currently, Toraya Shokudo offers lunch five days a week and dinner about four or five times a week. The monthly calendar is posted on its Twitter site.

At lunchtime, the South Indian thali meal is a ¥1,200 vegetarian set. Served on a banana-leaf-shaped plate, the meal consists of a wholesome twelve components. Everything on the plate, aside from the medu vadu, can be replenished, so essentially, it’s an all-you-can-eat meal. I commented that there are not many curry restaurants serving a variety of small bites like this. The owners replied that their inspiration comes from Omori’s well-known and respected curry restaurant Kerala no Kaze. 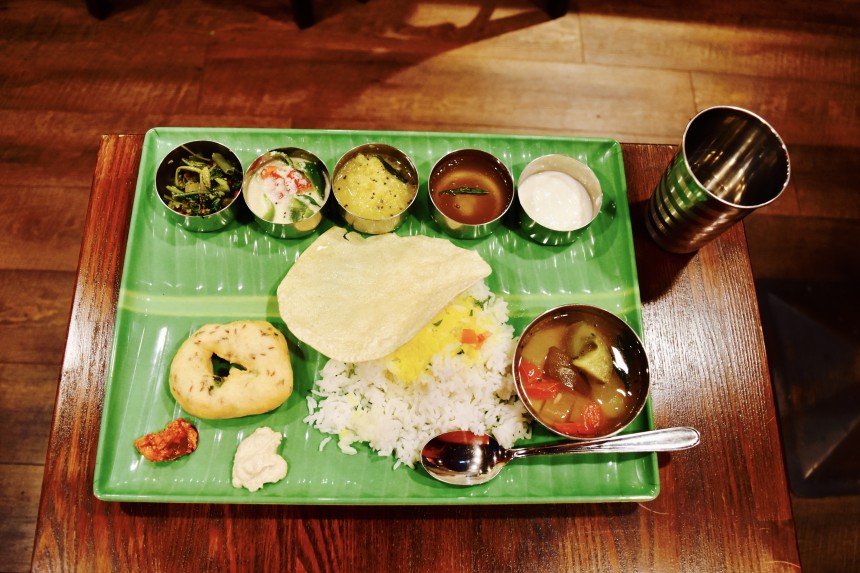 A map, in Japanese, details the particulars of the lunch meal: sambar, rasam, achar, chutney, daal, papadam, medu vadu and three daily specials. The day I visited, the three specials were a coconut dish made with kagura namban peppers from Nagaoka (in Niigata), spaghetti squash and kuushinsai (Chinese water spinach) made with fried urad dal (a popular lentil), presented in small katori bowls.

Rice is a big part of some curry meals and it can be frustrating to always be served Japanese rice instead of aromatic imported rice. I had no frustration here as the rice served was jasmine, as it pairs better with the vegetarian dishes. At dinner, however, the rice is basmati, which is a nicer match for the meat and seafood dishes that are served in the evening.

I was told to think of the banana leaf plate as a canvas and the components of the meal as different paints that can be mixed together. I was also encouraged to try mixing together some of the dishes, a great idea that other diners also enjoyed, creating their own combinations of flavors.

No need to be shy about asking for seconds or even thirds on any of the dishes that you like — the staff even encouraged me to take some more rice topped with dal to round out my seconds. While I was full at the end of the meal, it felt healthy, perhaps due to the variety of vegetables and the multitude of flavors.

After lunch, chai is offered for a supplemental fee: ¥200 for a hot chai with milk or ¥300 for a chilled chai made with soy milk. The hot chai was a great balance of sweetness, spice and creaminess. It was so good I’ve started making it at home, attempting to reproduce their exact recipe. It’s nice when inspiration from dining out is so good it affects how we eat at home. As for making the complicated thali meal, that is better enjoyed at Toraya Shokudo.