As more and more skyscrapers are being constructed around Shibuya Station, sadly what is disappearing are the small hole-in-the-wall spots like Fujiya Honten, a classic tachinomi (standing style) izakaya. Further from the station, where buildings, so far, have not been threatened with being razed to the ground, is retro spot Torikatsu Kitchen, known for bargain lunches and warm service.

The teishoku (set meal/lunch) diner is hidden away on a side street and in the back end of a building. Walking through the stairs and halls, one inevitably wonders if you’re at the right spot. Finding it is part of the experience. First-time diners usually have a look of relief when entering. The expressions on two salarymen changed lost to big smiles, nodding to each other to acknowledge that they had finally arrived. The small sign above the door says torikatsu in hiragana and CHICKEN in English below.

The menu is simple. Rice, miso soup, julienned cabbage, pickled daikon and fried katsu (cutlet). Diners select two to four different fried items from the hand-written Japanese menu posted on the wall including chicken, pork, ham, squid, horse mackerel or kani kuri-mu (crab in a thick white sauce). The nikumaki is a thin piece of pork wrapped around a big chunk of onion. Vegetarians have slim pickings with only onion and eggplant options.

The price is based on how many items you select: ¥650, ¥800 or ¥1,000 for two, three or four items. Katsuretsu refers to cutlets, breaded and deep-fried items like tonkatsu (pork) and torikatsu (chicken). It is also sometimes called furai (fry), as in aji furai (horse mackerel). There is a recommended popular lunch ninki (popular) menu of chicken, ham and a croquette at a discounted ¥650. 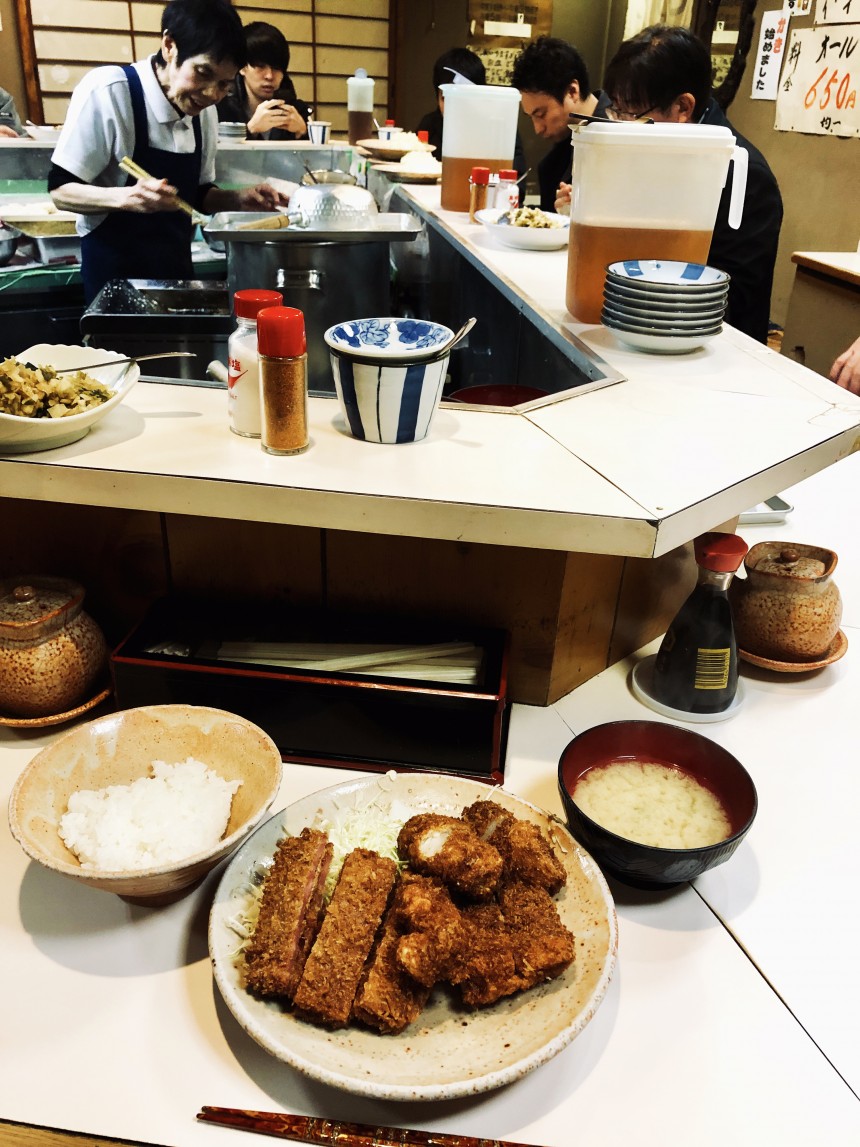 Most of the diners ordered the ninki set, regulars calling out their orders as they sat down. A young man came in and ordered “tori-tori” — a double order of chicken. I usually ask for gohan sukuname, a smaller portion of rice, as the regular serving of rice is big and it’s culturally polite to not leave any rice in your bowl.

On a recent lunch I was the only female of 18 diners squeezed around the open kitchen. There are three senior staff members who are more energetic than I am, warmly welcoming new customers and bidding farewell to those who have paid and are leaving. It’s a busy restaurant but many of the diners are solo and very quiet. Once in a while two people will come in and their conversation will blend into the big-box television planted on the refrigerator. Most audible of all, however, are the sounds of orders sizzling away in cooking oil. The ladies call out to each other to help get the rice, cabbage and miso soup ready for the orders. There’s a comfortable rhythm to this restaurant.

On the counter is soy sauce, karashi (Japanese yellow) mustard, a large bowl of pickled greens and sauce. The dark, sweet sauce is for seasoning the katsu as well as a dressing for the cabbage salad. The mugicha (cold barley tea) is self-serve.
Some diners bussed their dishes to the upper counter following their meal. With tight seating arrangements it’s not conducive to lingering. While there may not be a line at the door there is a quick turnover at this busy dive which uses the honor system to settle the bill — the aunties will ask how many pieces you had. Hopefully Torikatsu is around to stay, but with the speed that older buildings are being demolished around Shibuya Station, it’s hard to say.