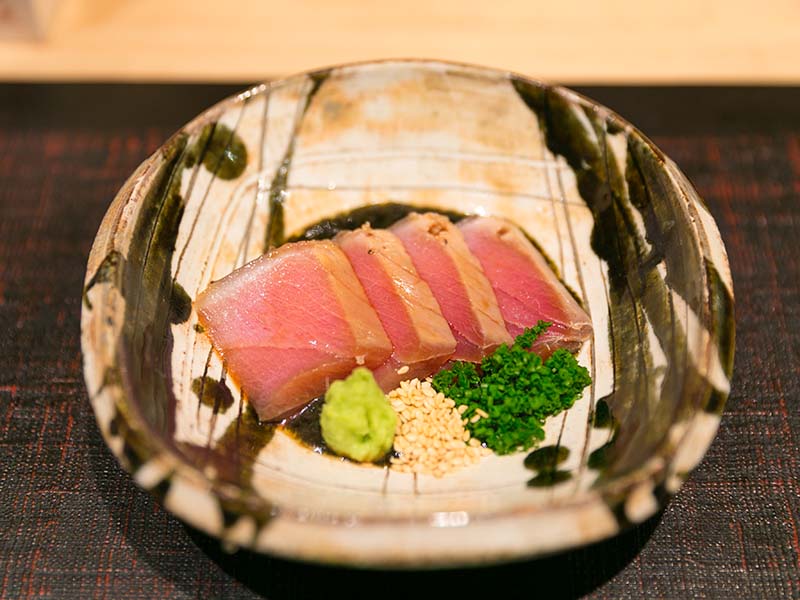 One of the most sought-after reservations in Tokyo is at Michelin-two-star Den by chef Zaiyu Hasegawa. Den is known for its jovial and modern take on traditional Japanese cuisine. Hasegawa’s first softcover cookbook is bilingual and filled with colorful photos of the dishes on offer.

I was most surprised to read that Hasegawa shuns using kombu (kelp) in his basic stock, preferring only katsuobushi (smoked bonito flakes) or sometimes a combination of katsuobushi and vegetables. He says that he finds kombu dashi “too heavy.” Traditional Japanese restaurants will use both kombu and katsuobushi.  Den also cures ikura (salmon roe), in katsuodashi instead of the more common soy sauce, to showcase the natural flavor of the ikura. These small changes make for subtle nuances in his cuisine.

Hasegawa generously hosts overseas chefs to train in his kitchen. This offers an opportunity for sharing ideas, sometimes leading to unexpected flavor combinations like shiso and cassis.

Some of the recipes call for only a handful of ingredients that a traditional Japanese pantry would have in stock and are easy to assemble: oysters sautéed in butter and soy sauce and added to rice cooked in a donabe with soy sauce and katsuo dashi; or root vegetables cooked with katsuo dashi rice and butter.

More advanced cooks will be able to recreate the chef’s signature salad and “Dentucky” fried chicken. Cookbook collectors will appreciate reading about Hasegawa’s philosophy towards cooking and understanding how his dishes are created.

The Japanese Culinary Academy (JCA) is a nonprofit organization that supports the advancement and spread of authentic Japanese cuisine around the world. It’s a lofty goal, but the members include chefs from some of the country’s best restaurants and culinary schools, led by chef Yoshihiro Murata of Kyoto Kikunoi. The JCA is coming out with a multi-volume series of books targeted at chefs around the world: The Japanese Culinary Academy’s Complete Japanese Cuisine. These books are like encyclopedias and will become reference books with a long shelf-life. No other cookbooks go into such great detail in English.

The first in the series, Introduction to Japanese Cuisine: Nature, History and Culture, is an overview of what makes Japanese cuisine so unique to this island nation. Covering nature, climate, history, presentation, essentials and even the role of seasonal festivities. The book includes many photos and recipes.

The second book, Flavor and Seasonings: Dashi, Umami and Fermented Foods, goes in-depth to the core of Japanese cuisine: kombu, katsuobushi, soy sauce, miso and sake. It delves into kōji mold and the importance of fermented foods and the science of how ingredients change when fermented.

Note, the next in the series are Mukoita 1 and 2—cutting techniques for seafood, poultry and vegetables.

Travels in the world of vinegar

Vinegar is an essential pantry staple in the Japanese Kitchen. Michael Harlan Turkell, author and photographer, travels around the world exploring vinegar in his book Acid Trip, and Japan has a big chapter in the book. Harlan Turkell travels throughout Japan visiting vinegar companies and sampling their unique products including Kagoshima’s black vinegar, aged in black ceramic jars sitting out in the open using a 200-year old recipe, Iio Jozo’s purple sweet potato vinegar in Kyoto and Yokoi Vinegar Brewing right here in Tokyo.

Recipes to try include amazu for pickles, sumiso (vinegar miso) for dressing vegetables and shimesaba (pickled Pacific mackerel). Sauces, like a smoky and sweet tosazu or the nutty gomazu made with sesame, are easy to assemble and can be used on a variety of dishes. For do-it-yourselfers there is a chapter on making vinegar at home.

The reader sees how vinegar plays an essential role in traditional dishes like sushi rice to more modern takes on drinking vinegar for your health with fruit vinegars by Osuya. Osuya has a branch in Ginza Mitsukoshi and produces some amazing vinegars in flavors like yuzu, ginger and pomegranate.

The book is filled with recipes from around the world, including many contributions from famous chefs and vinegar purveyors.

Ole Mouritsen and Klavs Styrbaek’s Mouthfeel: How Texture Makes Taste is an academic book on food. Mouritsen is the professor of gastrophysics and culinary food innovation at the University of Copenhagen and has other noteworthy books on umami and seaweed that go in-depth into Japanese culture. The texture of food plays an important role in its flavor and how it is perceived. Mouthfeel is the “central element of the total flavor experience.” Imagine eating an apple. Delicious if crisp and juicy, disappointing if soft and mealy.

Japanese ingredients and concepts, like kokumi, are introduced, describing the effects of thickness, continuity and “mouthfulness.” The book goes into great detail regarding katsuobushi, the world’s hardest food and tororo kombu, the world’s softest food. It also covers tsukemono, Japanese pickles, surimi, fish paste and Tsukudani, referred to as licorice kombu (kelp).

Mouthfeel is a technical book that will be appreciated by the very curious or those with an affinity for science. Mouritsen’s next book is on Japanese pickles.