Holistic reflexology heals from within

Whatever our dreams might be, humans are also creatures of habit, and plans for personal development can often be subsumed in daily routines.

Karen Carmeli, practitioner of the Grinberg Method, believes our bad habits physically manifest themselves as back pain, headaches, fatigue and emotional imbalance. “Most people try to tackle problems intellectually without fully understanding the true origin of behavior or physical discomfort,” she says.

The Grinberg Method proposes a balance between what’s learned intellectually and what is learned physically and corporeally. Developed from roots in reflexology by former paramedic Avi Grinberg in the early 1970s, the Method endeavors to holistically teach the use of movement, physical pressure and breathing exercises to increase awareness and create change in the mind and body. The objective is to increase one’s attention to what’s going on inside—and why we do what we do. Of several practitioners around the world, Carmeli is the only one in Japan.

Carmeli begins her craft with a series of one-on-one sessions in which she asks her client a number of questions, from personal goals or 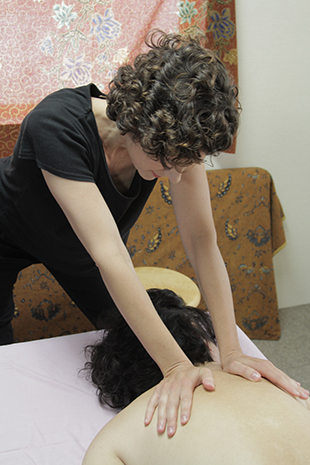 struggles to physical discomforts or emotional disorders. The idea is to establish what the subject needs and touch on the originating source of any problems. The essence of why subjects answer a certain way leads to a greater understanding of how they can change for the better.

This is followed by elements akin to massage, with Carmeli even examining the soles of clients’s feet as she searches for painful points in the body and works to remove them. “This is no normal massage, and it’s not a time to relax and take it easy,” she explains. “The client must also work to pinpoint and remove these painful areas by counteracting the practitioner’s physical pressure.”

The technique is frequently painful at first, owing to what Carmeli describes as built-up muscular tension and energy. These aches and pains, she says, are manifestations of vices developed over years of bad posture, stress, nervous habits and poor management of emotional experiences. By counteracting this pain and learning to prevent its creation by dealing healthily with physical and emotional stress, subjects can achieve a state of continual development.

The Grinberg Method is an individual process, and the number of required sessions varies greatly from client to client. Some learn quickly; others need more time to recognize and end longstanding habits. “The most important thing is that clients want to learn how to improve themselves emotionally and physically,” Carmeli says. They can then use this knowledge on their own and live life with a greater freedom of movement and expression.

Having undergone a series of sessions, I can say it was often an agony unlike anything I’ve ever experienced: sharp and deep, like being repeatedly impaled by a dagger. That’s not to say the pain I experienced was a bad thing. I was left physically exhausted, yet surprisingly refreshed, relaxed and with a sense of clarity. I became acutely aware that although I’m generally healthy, there’s a lot more I could proactively do to improve my wellness. I was told that clients can report raised energy levels, reductions in physical pain and the removal of repetitive negative behavior.

Whether you think this sort of thing is spiritual mumbo jumbo or right up your alley, all I know is that I had the most effective massage therapy of my life.

Get healthy at Tokyo’s top clinics

Whether you’re after the perfect smile, skin, or body, the city’s got you covered!

Quirk it up at this Naka-Meguro vegan joint