There’s a beautifully bizarre image of Harajuku in the global consciousness: a world where neon-haired youth don attire ranging from Hello Kitty-precious to Tim Burton-gothic, and at the end of the day, go home to their talking animal sidekicks. And while the real-life neighborhood has its share of eccentricities, very few shops or restaurants in the area fully embody the culture accredited to Harajuku. But that changes with Kawaii Monster Cafe. 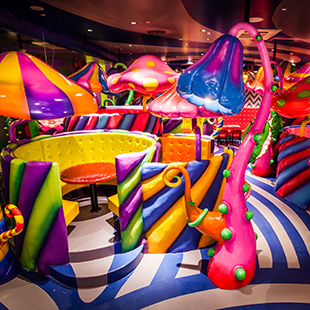 Located across the street from LaForet, Kawaii Monster Cafe is the brainchild of the people who brought us Kyary Pamyu Pamyu and Tokyo’s Alice in Wonderland-themed restaurants. This fact, however, still wouldn’t prepare the visitor for the visual explosion that awaits.

Entering Kawaii Monster Cafe is an experience in itself. Depending on the day, guests are guided by one of the restaurant’s Monster Girls: original characters with names reflecting their ascribed personalities—Baby, Dolly, Candy, Nasty, and Crazy—and with costumes that only Lady Gaga would deem subdued.

The first thing to meet the eye upon entry is a cake merry-go-round right by the entrance, with large neon animal heads looming overhead, and mammoth, mutated vegetation that belong in Super Mario Bros. A Lisa Frank color scheme permeates the space, further enhanced by a disco-ball ceiling. It’s a cartoonish atmosphere in a similar vein to theme parks and the diner from Saved by the Bell. It might be worthwhile to let the pupils dilate for a moment before hunting for a seat. 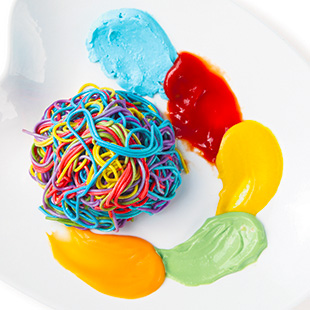 The spacious restaurant is then divided into four areas, each with a sub-theme of its own: the Mushroom Disco, replete with booths semi-concealed by oversized mushroom umbrellas; the somewhat morbid Milk Stand, where the aforementioned animal heads hover, sipping from huge illuminated baby bottles; the macaron-themed Mel-Tea Room, which is the simplest Monster Cafe gets; and the Bar Experiment—an under-the-sea lounge where more “adult” patrons can sip on cocktails amid LED jellyfish.

The food does not disappoint in either taste or appearance. Visually, the dishes are absolutely on par with the theme, all in hues complementary to the decor.

Among the menu’s highlights is the Colorful Rainbow Pasta (¥1,300), which lives up to its name. Each strand of pasta boasts a different color, with dollops of red, orange, yellow, green, and light blue sauces on the side—all with their own respective flavors. The flavor is interesting, but you’re never sure if it should be edible. But the charm is in its playfulness—and who says you shouldn’t play with your food, anyway? 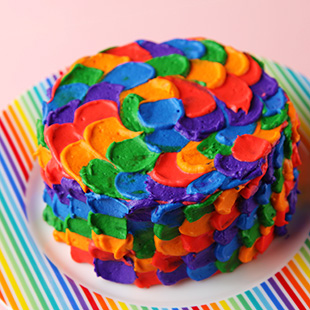 Desserts are equally rainbow-hued. The Colorful Poison Cake (¥850-2,800, quarter slice to whole cake) isn’t poisonous, although it might appear so. It looks like an arts and crafts project involving melted crayons, and is fruity and sugary; it’s cake doing its job. There’s also the Colorful Poison Parfait (¥2,300) which, ignoring the menu’s obsession with toxicity, is a large sundae with neon whipped cream, fruits, ice cream, puckered candy lips, a Swiss roll, and a cone hat … basically, kawaii culture in a cup.

The drinks menu is also filled with questionably-named, intriguing offerings including the Non-Druggy Cocktail Experiment (¥720), a non-alcoholic mixture that comes in two test tubes; and the Fruity Heavenly series of mason-jar virgin beverages (¥780) that come in tapioca, mango, and fruit flavors.

The prices may be up there and the food a bit questionable; however, Kawaii Monster Cafe will exceed expectations of those seeking to experience the crazy wonder of Harajuku.