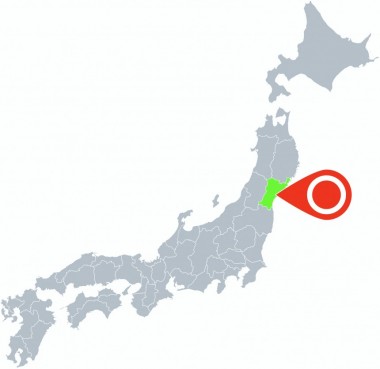 The annoying holiday jingles you thought you could escape when you left your own country; the horde of shoppers crowding your favorite cafe; a sudden 22°C drop from toasty summer and that bewildering KFC craze — Christmas is here, Japanese style. For Japan veterans, wintertime ‘illumination’ light displays are a welcome remedy to maintain our sanity. Not only are these bright lights fantastic to look at, but they are the perfect excuse to start a night of drinking. Should you have either or both goals in mind, hop on the next Shinkansen 90 minutes north from Tokyo and head to the capital of Miyagi Prefecture, Sendai.

For over 30 years, Sendai’s Pageant of Starlight has been transforming the city’s most famous street, Jozenji Dori, into a winter fantasyland. This year the pageant runs from December 14 – 31, beginning at 5:30 pm every night. 600,000 white-yellow lights contour 160 towering Japanese zelkova trees, best viewed from within the tunnel of lights along the ‘catwalk.’ There may even be a light snowfall to complete the winter magic.

The most popular photo backdrop is the “Memories of Summer,” a female nude bronze taking center stage near Mitsukoshi Department Store, where the festive lights glimmer like stars. However, for a guaranteed smash hit Sendai at Sunset Celebrating the city’s Pageant of Starlight in on Instagram, you’ll want to visit on December 23 for the “Story of Santa’s Forest” parade: twice during the evening a red tide of up to 800 performers and citizens donning Santa costumes dance, sing and merry-make their way down the avenue.

Don’t end your night after your tour of the pageant: well known as Tohoku’s largest entertainment district, Kokubuncho is conveniently located right next to Jozenji Dori, in the middle of Sendai’s compact city center. Packed into just a few small blocks are 2,700 bars, restaurants, hostess clubs and cabarets. Don’t let the slick street vendors, raunchy store signs, lack of foreigners or the occasional drunk salaryman deter you. Kokubuncho is both exciting and overwhelming with gourmet eats, live music, dive bars, places to mingle and even enjoy a bit of history. “Buncho,” as we locals call it, is not to be missed.

While Kokubuncho is definitely more of a nighttime economy, that doesn’t mean you can’t start early. ‘Tis the season to start a pub crawl in the late afternoon. While limited in number, there are some businesses open during the daylight hours. 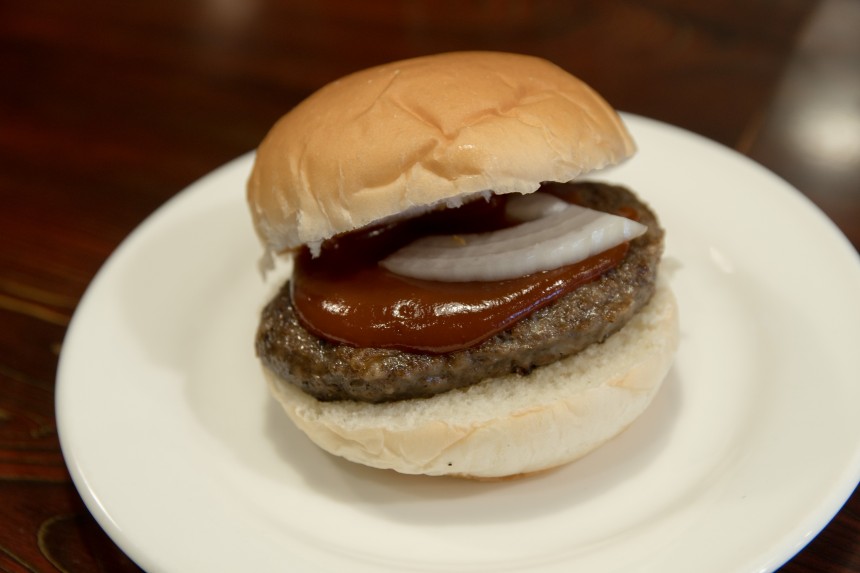 Hosoya Sandwich should be considered as a first choice because the increasingly popular, historic hamburger shop closes as soon as they run out of the daily supply of ingredients, which tends to be around 3pm. The narrow shop with a rustic interior and wall of golf memorabilia has counter seating for less than a dozen people, but has sold a mind boggling 1.28 million burgers to date, all hand-grilled and following the same basic original recipe since opening in 1950. Note that Hosoya Sandwich is often incorrectly re- ferred to as Japan’s first hamburger shop. In fact, it was one of many first-wave hamburger shops established in Japan after the war — but it does hold the title of being the only remaining hamburger joint since then. English-speaking Chef Hosoya, the son of the original owner, recommends visitors sample his tasty steaks with Japanese beef over the humble hamburgers. 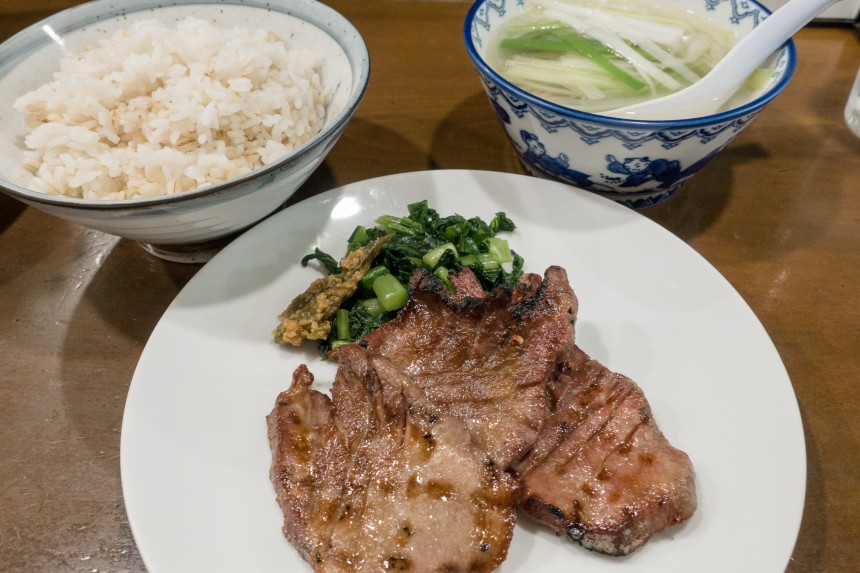 Meat-eaters have likely already heard of Sendai’s love affair with cow tongue. Locals will tell you the best gyutan is a grilled cow tongue, juicy and tender but retaining some chewiness. It is served with a side of oxtail soup, a bowl of barley rice and a dab of spicy pickles. Word of mouth, the delicious taste and its uniqueness have led to the dish becoming the city’s trademark. You’ll find many shops in Kokubuncho offering gyutan as a side dish, but you can also go to one of the 100 or so specialty gyutan restaurants, such as the legendary Aji Tasuke, across the city. 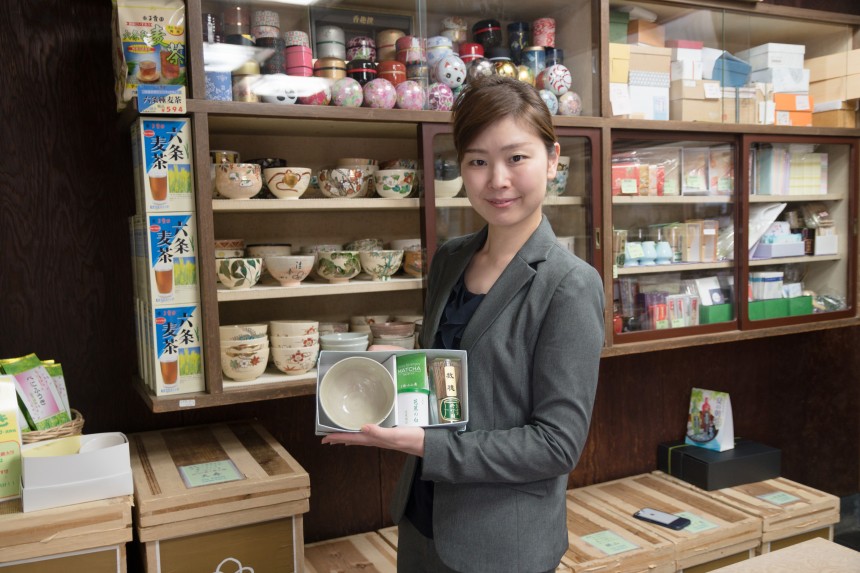 One place in Kokubuncho may seem out of place among the slumbering bars and restaurants: Bashoen tea shop, founded in 1688. Three centuries ago, samurai processions marched right through Kokubuncho Dori on their way to Edo (ancient Tokyo). The many geisha houses that once dotted this area preferred to buy their tea from Bashoen in order to serve the best quality to their customers. Now in its 15th generation, the family-run business produces the best of teas and has become a supplier for national events. Visitors are free to browse the traditional shop interior for seasonal or local tea, artistic tea bowls (¥2,000~¥8,000) or even a matcha tea starter set.

Miyagi Prefecture is one of three Pacific Ocean side prefectures sharing the Sanriku Coast, home to some of the most fertile fishing grounds in the world. As a result, the freshest sashimi, sushi, fish, oysters, sea urchin and succulent hoya (sea pineapples) are readily available around Kokubuncho. 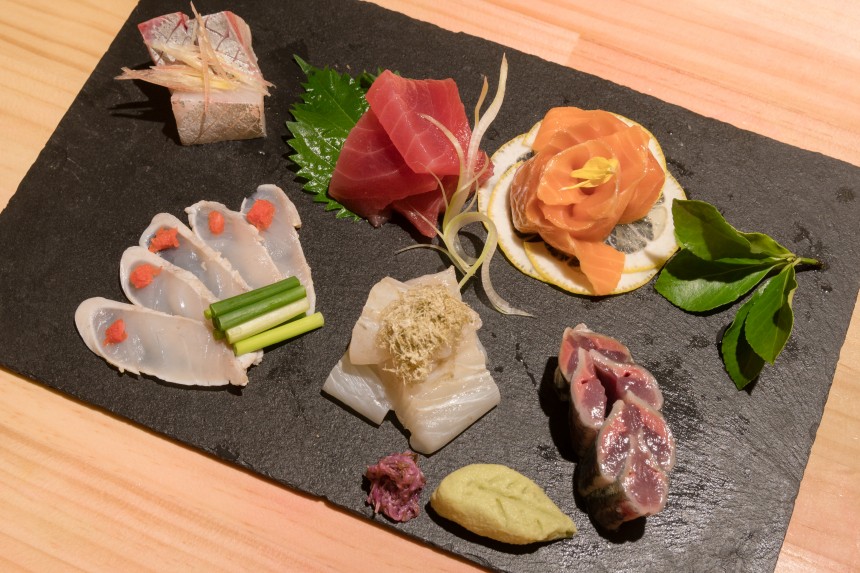 Hibiki opened just over a year ago, but is already making a name for itself. The green lantern hanging outside the entrance means this shop promises to use as many local ingredients as possible. The restaurant strives for quality in its food and experience — a passion that is reflected by the detailed presentation of dishes. Explore these local flavors by sampling Miyagi specialties such as the fried triangular tofu from Saiho-ji mountain temple or the wheat flour umen noodles of southern Shiroishi. Wash it down with a selection of local sake. Staff don’t speak English, but do their best to communicate and are happy to welcome foreigners. 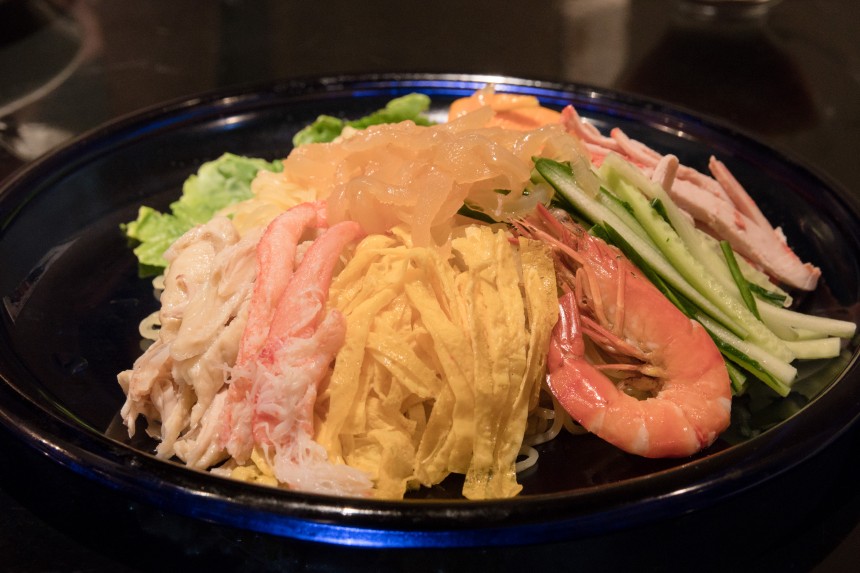 The variety of dining options in Kokubuncho can’t be overstated; in fact, two of Sendai’s specialties have been adopted from Chinese cuisine and are best experienced at Saika. Reasonably priced and big on flavor, the soon-to-be century-old Chinese restaurant has long been popular during both lunch and dinner hours. The famous mabo yakisoba starts with a bed of soba noodles fried extra crispy and served in a bright red pot. The server pours a heavenly mix of spicy ground beef and tofu over the noodles at your table. The mix of strong flavors with a crunchy, soft and chewy texture combination is an experience in itself. For something lighter, opt for hiyashi chuka, cold Chinese noodles: choose either sesame or soy sauce dressing and mix in the veggies and meats before slurping away. Finish the meal with a selection of exquisite Chinese teas.

If you’re getting thirsty, head over to Hatago. The third- floor sake lounge provides the perfect tree-lined view of the Pageant of Starlight illumination on Jozenji Dori with a menu offering premium sake from all across the country. Go with the classic hot sake if you like, or follow manager and sake sommelier Mr. Aoya’s suggestion of drinking sake in a ‘modern’ way: chilled, delivered by a staff member able to properly introduce it and served in a special sake glass. A menu of small dishes are specifically designed to pair with sake here, too. Look out for Aoya’s tourist-catered tasting seminars, too. 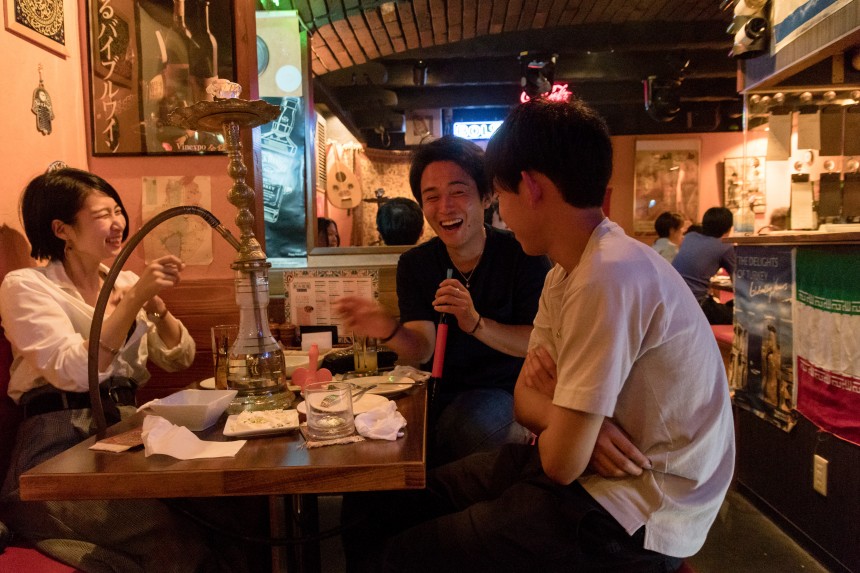 For non-Japanese cuisine, make your way to Middle Mix. The basement cultural hub is a mix of Middle Eastern cultures and cuisines. Owner/Manager Roy Somec says he wanted to make a place with “no war, no politics; just great food and culture from the Middle East.” Flags from Turkey and Greece hang on the wall but the space endeavors to represent much more of the region. The kitchen serves up kebabs, Turkish pizza, amazing cheeses, falafels and much more, all seasoned with authentic imported spices. Somec imports Gold Star Beer from his home country of Israel, but keep an eye out for signature cocktail “Tears of Sphinx.” Hookah is also available to smoke (with tra- ditional and trippy flavors) and every Friday night a belly dancer performs. 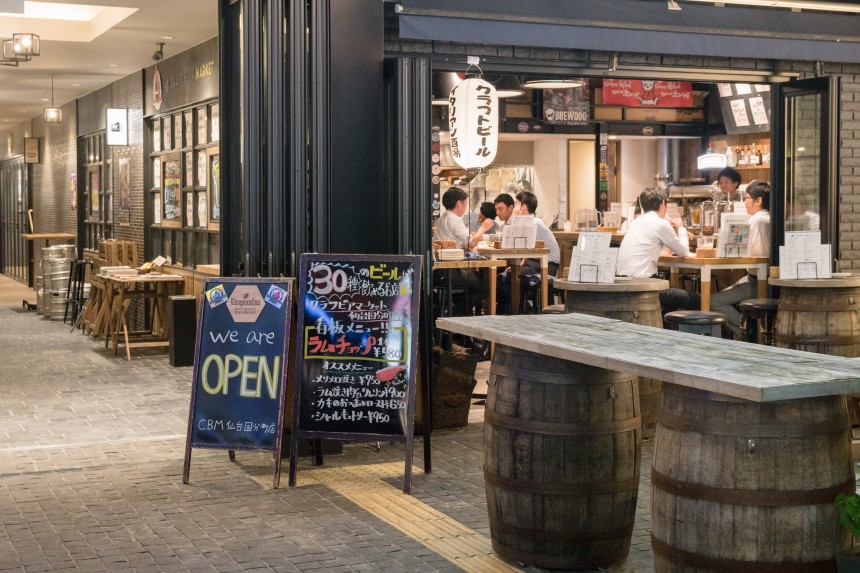 You won’t struggle to find craft beer offerings in Kokubuncho. Craft Beer Market offers a rotating menu of 30 Japanese craft beer. Indulge in a bitter IPA from Miyagi Prefecture or the pale ale from Iwate Prefecture, both for a reasonable ¥480 a glass or ¥780 a pint. Sit on the patio, which is ideal for people watching — there are some characters to see in this part of town. Munch down on fries, meats, salads, burgers and even your choice of sashimi. With so many options here, you can get creative with your pairing options. It would be best to bring friends, to share sips of beer and nibbles of food.

LATE NIGHT IS WHEN THE PARTY STARTS

Thanks to Sendai’s compact city center, Kokubuncho’s nearest subway is less than a five-minute walk away, while Sendai Station is just 20. Alternatively, a taxi ride anywhere you are likely staying won’t cost more than ¥1,500. For those still ready to party, the night is still young. 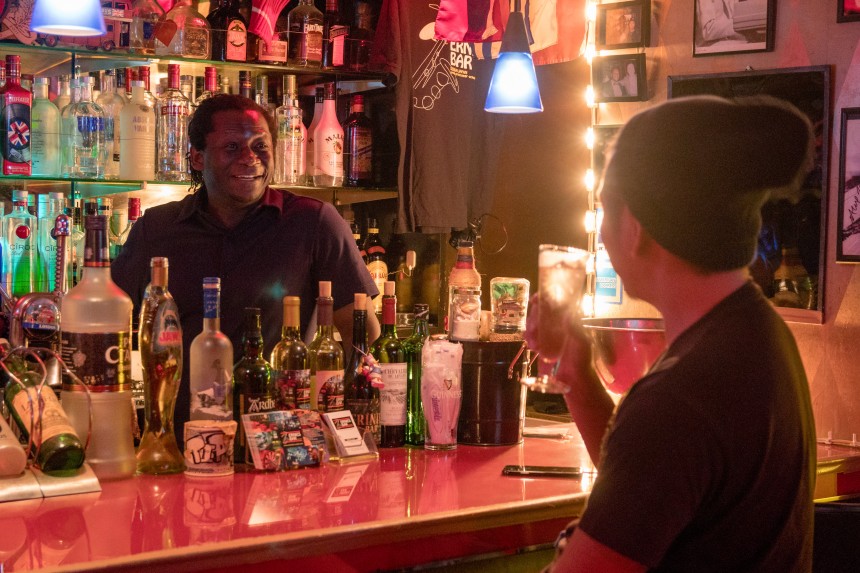 What trip to a new city isn’t complete without meeting a few locals? Ernie’s Bar, located on the first floor of Social Building, is perfect for catching up with an old friend, mingling with a new one or listening to the local gossip. With no cover/seating charge and alcoholic drinks starting at ¥500, it is no wonder this has been a popular spot for bar goers for over 12 years. Bilingual British owner Ernie offers the late twenties to thirties crowd a relaxing and pleasantly not British-themed cavern to chill, laugh and have a little fun until the sun rises. 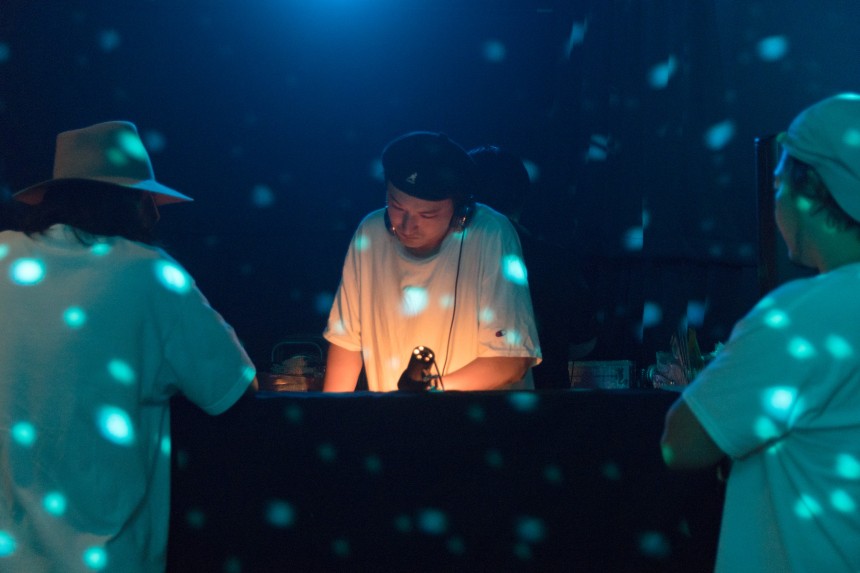 If you have a lot of energy or want to let loose, Sendai has several small to medium-sized night clubs. Shaft is the only night club in Kokubuncho which is neither a snack nor kyabakura hostess bar. Every night of the week the club hosts live DJs or bands playing genres that include electronic, trap, hip hop, R&B and even, occasionally, rock or J-pop. Shaft is split into two sections: the dance/live area and the lounge/bar, where the music is still loud but you can chat in a normal voice while you enjoy a drink from the expansive bar menu. 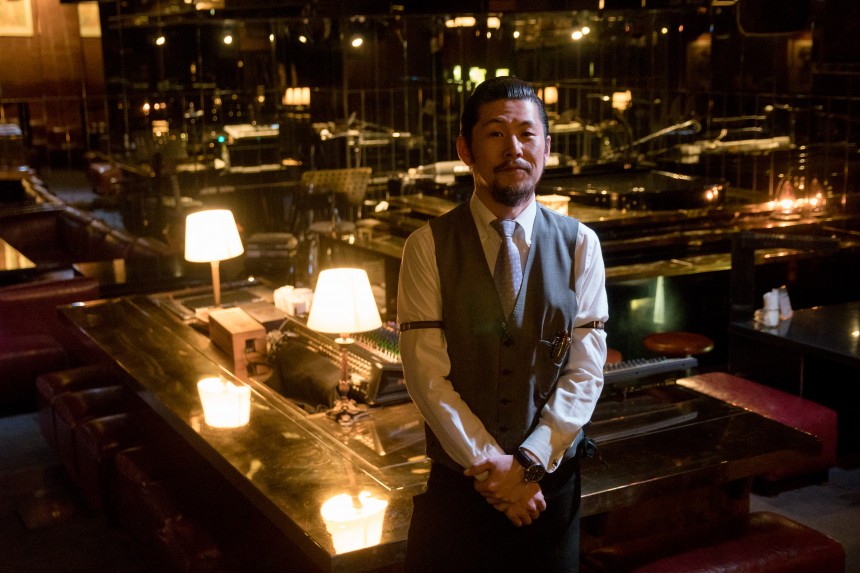 If you prefer a slower paced evening, seek out a live music venue. You can’t go wrong with Scotch Bank as they offer late-night live hourly performances from after 7pm, going until an hour or two after midnight, every night of the week. Professional piano and vocals are performed by non- Japanese performers in English to the tunes of classic jazz, soul, R&B and more. Let them know if you have a request for the next set. The speakeasy style lounge, hidden two floors beneath the Hotel Grand Terrace carries an exten- sive whisky selection. In line with the original theme of a “bank for Scotch whisky,” regulars buy a bottle of whisky to deposit through the bottle keep system, returning every so often to make a tasty withdrawal. However, one-time visitors are more than welcome to tickle their taste buds with more affordable local Nikka Distillery whisky — or go all out on a rare international brand. The menu includes a decent food selection of delicious entrées, appetizers, cocktails and more.

For over three decades Sendai residents have viewed the Pageant of Starlight as a precursor to a night of good food, drinks and music in the Kokubuncho entertainment district. It seems the winning formula for winter fun is an unlikely blend of starlight and red-light. Even after some daytime sightseeing around Sendai (sendai-travel.jp) for ideas), the action doesn’t stop when the sun goes down. Come up north this December — it’s time to experience winter as it’s done in Sendai.

Aji Tasuke
11:30am – 10pm
*Closes when ingredients run out for the day, which happens often. Closed Tue

Bashoen
Varies. Generally daily on afternoons from 1pm until sunset. Hours should be posted on door.