Dipping into the diminishing culture of mixed-gender bathing

About the time that mixed bathing was banned — making it officially naughty — it became sexy. And it was about that time that Japan truly joined the ranks of the civilised.

The passage above, from Eric Talmadge’s book Getting Wet, refers to when the Meiji government gave in to foreign pressure and started segregating its onsen (hot springs) and sento (bath houses) by sex. What had previously been the most natural thing became sinful overnight. Over a century later, few Japanese would consider strutting their stuff in a mixed-gender bath, not necessarily for moral reasons but simply because it’s embarrassing.

Outlawed in Tokyo and other urban centers, konyoku onsen can still be found in most prefectures, often in remote locations. They’re on the wane — estimates say there are a few hundred left — and most of them seem to cluster in Tohoku, among which Nyuto Onsen in Akita is perhaps the most notable. Another one is Aomori’s Sukayu Onsen with its famed Senninburo (1000-person bath). When I recently visited Aomori, I decided to finally take the plunge myself.

“Konyoku onsen? You’ll only see ojiisans and obaachans there,” my Japanese friends told me, referring to the alleged elderly clientele who must have either been alive before the laws changed or simply too old to care.

Yet there was something alluring with the idea of entering a mixed-gender bath. I knew very well what onsen culture entails, which definitely doesn’t include ogling at other people, but I must confess that the idea of konyoku felt both sexy and forbidden. Even if it did turn out to be full of old-timers — or completely empty for that matter — I felt like after hundreds of soaks in regular onsen across the country, I was ready for a new experience. I just didn’t know at that point how wrong my friends were. 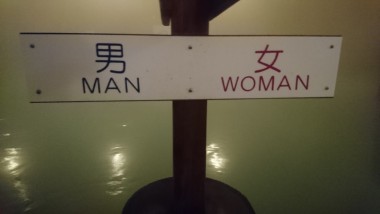 After checking in at the rustic ryokan at Sukayu Onsen, at the foot of scenic Mt. Hakkoda (the area with the highest snowfall rates in the world), I only have time for a brief soak before dinner. There are separate locker rooms for men and women, and a partition shields the entrances into the baths. But unlike regular onsen, the wall abruptly ends in the middle of the rear bath, giving female bathers a snippet of privacy if desired. The front bath has no walls but a sign prompting men to keep to the left side and women to the right.

That’s not an issue, as the bath indeed turns out to be empty. After the women-only time, nightly between 8 and 9, I decide to go for another soak. And here’s where the madness starts. As I enter, the bath is empty save for a young woman who at first seems to have dozed off on the male side. She wakes up to the sight of me, perhaps expecting someone else, and scurries off to the other side. A few minutes later, a man enters and is scolded at by the woman. He apologizes and sits quietly down at one of the edges. Their relationship is not immediately obvious, and the man is at least 15 or 20 years older than the vixenly woman.

Suddenly, the woman stands up and gives the man another scolding, baring it all in the process. I try not to look, not wanting to be perceived as a wani (crocodile, or more specifically, onsen bathers who creepily stare at people of the opposite sex), and aware that foreign bathers reportedly have caused trouble at Sukayu before by not observing correct onsen etiquette.

But the spectacle is simply too bizarre to ignore, as the woman now dashes off to the rear bath with the man following closely. Enter another couple, in their late forties or early fifties, who sat next to me at dinner. The woman, who is a chatterbox extraordinaire, seems to be giving the man constant marital advice. I imagine they are here on a tryst, and they stick together in the pool, completely ignoring the sign.

As the bath is now starting to fill up, I decide to head for the massage streams in the far corner of the room. Half-way there another woman enters through the partition, shrieks and almost throws herself into the rear bath, terrified at the sight of the gaijin. An old man chuckles merrily from the front bath.

Not wanting to make people feel uncomfortable with my presence, I get up and come back for a third and final soak after midnight. Again, the bath is empty save for a sole woman, a towel wrapped around her head, in the middle of the men’s side. She doesn’t seem to notice me, and while rinsing my body I decide it’s finally time to show some konyoku etiquette and strike up a friendly conversation. But the woman is gone.

I let my head slowly sink toward the scalding surface, somewhat resembling an embarrassed crocodile.

Dan Asenlund is a writer and filmmaker dividing his time between Tokyo and Stockholm, Sweden.

A healing break on the peaceful outskirts of Tokyo

Art and Relaxation in Kobe

A day in laid-back and cultural Kobe

Finding art, beauty and community in the bath