A career in comedy and standup in Tokyo

Best known for his role as the hapless priest Dougal McGuire in the legendary sitcom “Father Ted,” Ardal O’Hanlon is a multi-award-winning actor, comedian and writer set to perform in Tokyo later this month. The 54-year-old Monaghan-native, currently starring as detective Jack Mooney in his fourth season of the crime drama “Death in Paradise,” is coming to Japan as part of the Asian leg of his extensive stand-up tour. Metropolis recently caught up with the affable Irishman to hear more about his career and upcoming shows.

Metropolis: How did this Asian tour come about?

Ardal O’Hanlon: I was happy with how the tour had gone in 2019 and there was a window to extend it. A promoter working in Asia asked if I’d be interested in coming and I jumped at the chance. I loved my previous trips to this part of the world and as a comedian, you want to perform to as many different people as possible.

M: Have you been to Japan before?

AO: I made a spur-of-the-moment decision to come to Tokyo last October for the Rugby World Cup quarter finals. Ireland’s game against New Zealand was a debacle but it was still a great weekend. We visited dingy bars in Shinjuku and saw Japan vs. South Africa, which was fantastic. My other visit was around ten years ago when I did some shows at Pizza Express.

M: What were your impressions of the country?

AO: I think it was more difficult to navigate around Tokyo then. I remember being overwhelmed, a genuine culture shock. That said, the experience was wonderful. I was intrigued by the subcultures; however, sumo was definitely the highlight. It was fascinating to see and get a slight handle on something with such cultural significance. 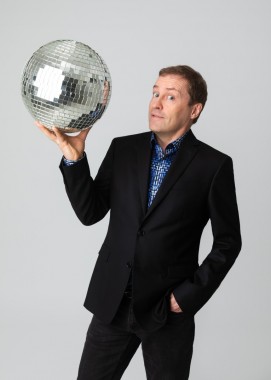 M: What are your plans this time?

AO: I’ll be with my wife, so we’ll take in some temples, the imperial palace, that kind of thing. We’re flexible and open to ideas. Food will also play a big part. I know it’ll be far superior to anything we can get at home. I love ramen, sushi, tempura and I’m also happy to try something different like fisheyes.

M: What can we expect from your show in Tokyo?

AO: I hope it’ll be lively. It’s usually me talking about myself and my flimsy world view, sharing jokes, anecdotes, observations, and stories. It can be surreal and quite silly. I always try to make my stuff universal so it should work abroad. Things like sex, family, and religion, everyone knows where you’re coming from with these topics.

M: Your father (Rory O’Hanlon) was a well-known politician. Do you speak about politics in your shows?

AO: A little, but not on the nose politics. There’s been lots to talk about in recent years with Trump, Brexit, and everything. A comedian’s job is to articulate what’s annoying everyone else. It’s a great way of expressing your frustrations and the frustrations of the audience. Things change, though. In spring I joked a bit about Brexit, yet by autumn I sensed people were tired of hearing about it.

M: Was it always your ambition to be a comedian?

AO: Not at all. I was a quiet, watchful kid that read lots and dabbled in some terrible poetry. My friends found me funny, but I was always under the radar at school. While I enjoyed watching American comedians such as Robin Williams, Steve Martin, and Richard Prior, I didn’t think I wanted to be like them. It wasn’t until I went to university and started debating that I got a taste for performing. The excitement and feedback you get from a live audience, that was a game-changer for me.

M: Was it nerve-wracking in those early days?

AO: Not only the early days but probably for the first ten years. I agonized over things too much, then it was fine when I got on stage. Right away, you realize the audience is on your side and not out to get you. Eventually, I learned to control my emotions and embrace it. While I now kick myself for wasting time and energy worrying in the past, I suppose having some frisson keeps you sharp.

M: What was Ireland’s stand-up comedy scene like in those days?

AO: Non-existent really. My friends and I were aware of this burgeoning scene in London and a mystical place called the Comedy Store in Leicester Square. You saw the first generation of British stand-ups appearing on TV. They dressed like us and spoke our language. It was inspirational. Wanting to emulate them, we set up a club once a month, that became once a week, then started thinking about going to London.

M: Where you surprised how well things worked out for you there?

AO: Absolutely. It felt like the last throw of the dice. In Ireland you couldn’t really earn a living doing comedy. I planned to give it a year or two in London, then come back with my tail between my legs. Fortunately, things happened quickly for me. I picked up a few Best Newcomer awards and within a year was offered the role in “Father Ted.”

M: That was after the writers saw your show.

AO: Yes, Graham [Linehan] and Arthur [Matthews] came to see me a few times and I got to know them fairly well. They felt they could harness my comedy for the character of Fr. Dougal, although what that says about my stand-up, I don’t know (laughs). I was surprised to get the part and even more shocked by the program’s success.

M: Did you have any doubts about taking the role?

AO: A few. Appearing on TV was anathema to some stand-ups at that time. It was seen as selling out. Also, the idea seemed a little odd; a show in England about three Irish priests. I thought it was funny, as did the writers and Channel 4, but I wasn’t sure if the audience would buy it. Thankfully they did.

M: How was the camaraderie on set?

AO: Fantastic. It was a giddy time. Dermot [Morgan], Frank [Kelly], Pauline [McLynn], and I all couldn’t believe our luck. We had so much fun, it was like a holiday camp atmosphere all the time.

M: Where you aware that Dermot Morgan was sick during the final series?

AO: He confided in me that he had medical issues and did look a little ashen but wasn’t noticeably unhealthy. Everything had been wrapped up and then Dermot died literally the day after we finished the third season. The news shocked everyone. It was devastating.

M: After “Father Ted,” were you concerned about becoming typecast?

AO: Kind of, but I didn’t think I deserved anything else. Dougal was a very popular character and it’s hard to escape that. It was my break into TV, and I’ll always be extremely grateful for “Father Ted.” I’ve had a great career as a result.

M: How did you feel when you received the Olivier nomination for The Weir?

AO: Shocked. At the same time, there was a feeling of validation. Coming from a sitcom, some people look at you with a snobbish perspective as though you’re not a real actor. To get a nomination, I guess I must have been doing something right. I got into stage productions quite late and each time it was extraordinary. The wonderful thing about theatre is the time you get to audition and speak about your character. It’s a lovely indulgence that’s very different from TV.

M: Speaking of TV, it was announced that this will be your final series of “Death in Paradise.” Why did you decide to leave?

AO: Four years filming in the Caribbean was such an enriching experience and I learned so much, but it was very demanding. You’re away from home for a long period and that takes its toll. I’ve done around 24 episodes playing the same character who kind of covers the same ground. I just felt it was time to move on and I was also keen to get back into stand-up.

M: Finally, we know you love reading. Any books you recommend?

AO: The best book I’ve read in the last month is the “Mars Room” by Rachel Kushner. She’s writing about a woman serving life in prison, though it’s really about America and how dysfunctional society is there. It’s funny and imaginative. I love it.

The Story of Film: A New Generation

The industry is changing, as are audiences