Exploring one of the oldest shopping districts in Tokyo

Stepping off the Saikyo Line train at Jujo Station, young families with small children meet with fashionable friends, elderly residents chat and taxi drivers linger amid the afternoon buzz in the sunshine-filled plaza in front of the station building. Jujo is a traditionally working-class district, just a 10-minute train ride from Shinjuku, but its low-rise buildings and hard-worn shop owners show that this pocket of the city has a character all of its own.

The area has drawn some attention for its shotengai (shopping streets). Like many inner-city neighborhoods, the shopping street is the soul of the district, but unlike other places Jujo is the proud owner of multiple shotengai — 11 in total. Mainly home to independent businesses, each of the shop-lined streets is slightly different to the next, but all pulse with real life, untainted by the rundown shuttering that has maligned similar streets elsewhere; Jujo’s shotengai are encrusted with shops old and new selling the same specialities for generations. 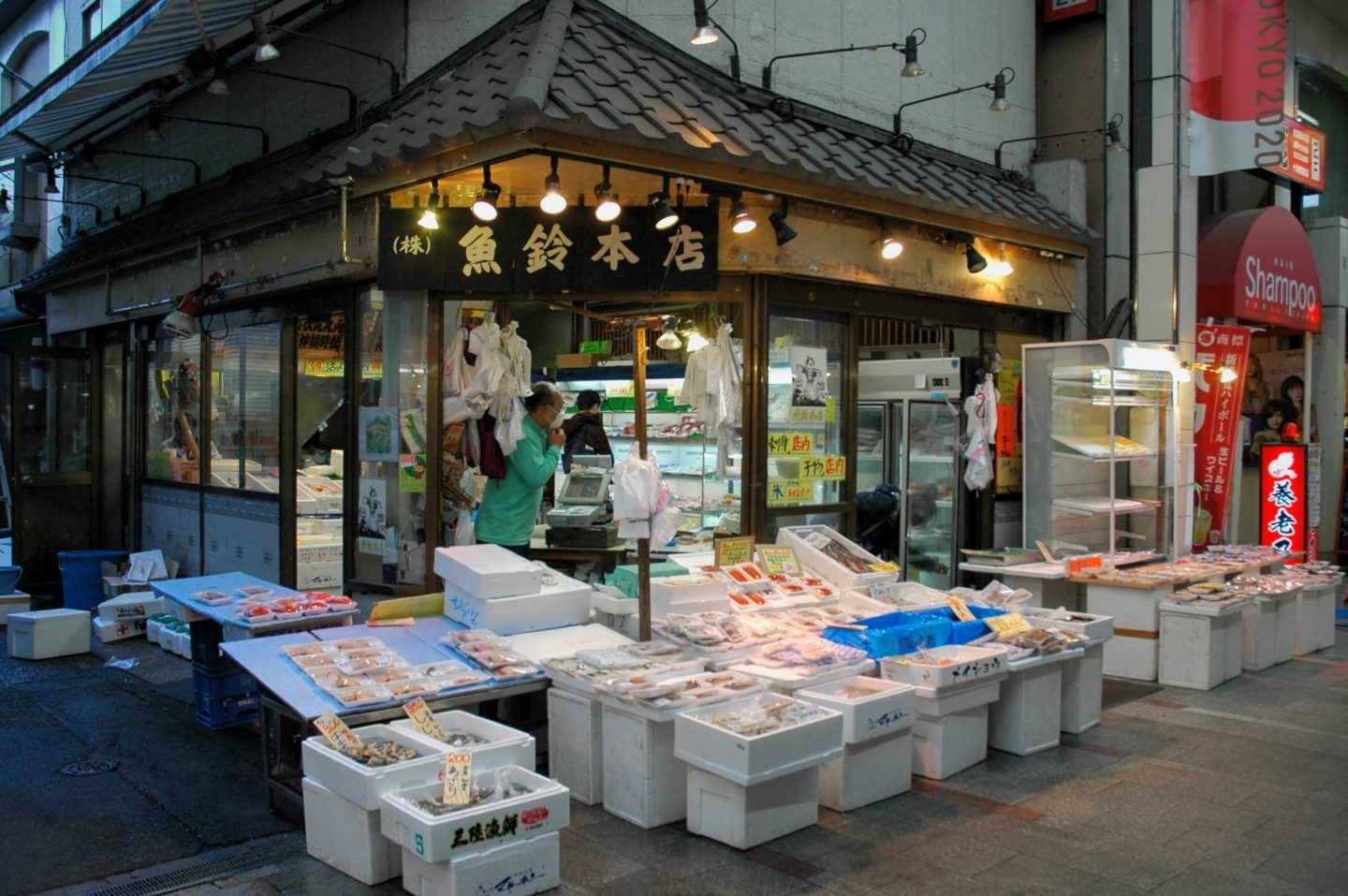 A fish market in Jujo.

Once a village on the Iwatsuki Kaido — one of Japan’s many Edo period (1603-1868) highways — modern-day Jujo developed out of the demand for safe housing following the widespread destruction caused by the Great Kanto Earthquake (1923) and the aftermath of World War II bombing. Migration to the area rose quickly. Small lanes and alleyways became built up as inhabitants flocked in to make Jujo the densely populated, urbanized area that it is today.

Jujo Ginza is one of the oldest shopping districts in Tokyo — established in 1933, it’s home to more than 180 shops and goes by the slogan “a shopping street with kindness.” Walking down the main covered shotengai and into a warren of walkways, the true warm, open friendliness here is easy to feel: greengrocers proudly display gleaming apples, fishmongers chat to regulars, secondhand clothing shops call out to bargain-hunters and yakitori stalls entice with wafts of cheap bites to eat. Much in Jujo is affordable. 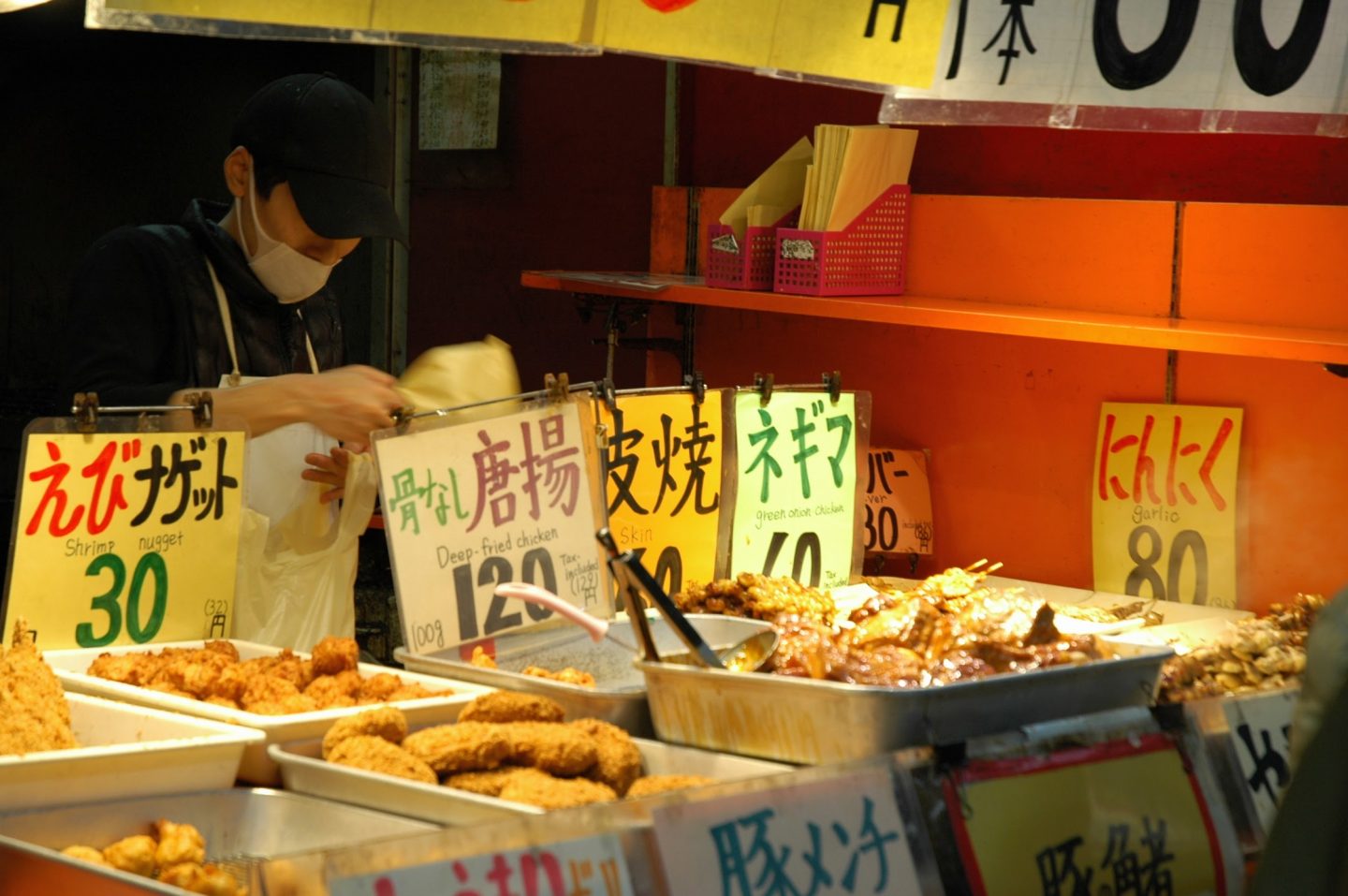 Slotted between the ramen joints and kissaten (traditional coffee shop) are Malaysian, Indian and Vietnamese eateries and halal grocery stores. Although the district harks back to a Showa era (1926-89) atmosphere, there’s a cosmopolitan canvas of locals from different backgrounds adding to the open-hearted feeling of the area and making Jujo feel welcoming. A feeling of equanimity appears at odds with the rapid rush of Tokyoites’ busy lives; this is a place of community, the home to which commuters return, where inhabitants relax, unwind and eat delicious food.

Any visit to Jujo requires that you arrive hungry and, if not, the succulent snacks on offer will make your stomach rumble soon enough — it’s ultimately impossible not to be lured by the food on offer. Cheap and mouthwatering, food is within each reach at any point in the district. Start your food odyssey with a golden korokke (potato croquettes) for ¥90 from Meat Delica Shioya at the entrance of the shotengai — vegetarians should stop off at Miyahara Jujo Ginza for a few warm and crunchy vegetable korokke for ¥30 a piece. Yakitori proves popular in this area, and it’s not hard to see why. As workers return home, the orange glow of the yakitori storefronts invites lines of hungry residents to wait patiently for their meals, but the wait is worth it. Toridai boasts monumental, delicious variety, but the tsukune (chicken meatball) are highly regarded. 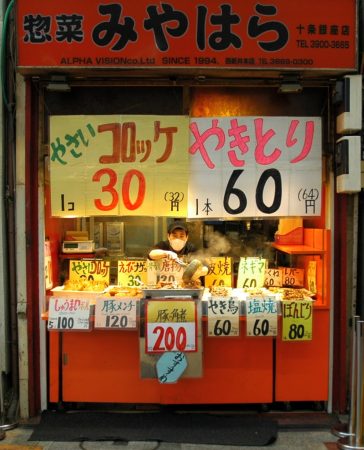 For caffeine, head to a kissaten (traditional cafe): either the clean, calm first-floor of Umenoki, overlooking the shopping street, or the more traditional, retro-cool of Mikasa, both offering a space to unwind and relax away from the strolling, shopping and snacking.

Closer to Jujo train strain — around a 10-minute walk — Jujo Fuji Shrine sits graciously atop a kofun (ancient burial mound). Dedicated to the worship of the kami (spirit) of Mount Fuji itself, the shrine is adorned with volcanic rocks from Fuji to create an approximation of Japan’s most famous volcano. Each year on July 1, a matsuri (festival) takes place, marking the opening of Mount Fuji to visitors, not just to venerate the spirit of the volcano, but also traditionally intended for locals who couldn’t visit the real Fuji in person. The surrounding streets are colorfully decorated and packed with festival-goers and food vendors.

As the day draws to a close and evening settles across Jujo, while the trains arrive laden with workers who make a beeline for their favored izakaya (Japanese pub) or join the lines at the open-fronted yakitori shops, the Shinohara Theater opens its doors.

First ushering theater-goers in 1951, this small playhouse is a reflection of Jujo’s working-class credentials. Known for its taishu engeki or “popular theater,” this local favorite also attracts people from other areas with its entertaining array of period dramas, flamboyant costumes, singing and dancing. Attending a performance here is an intimate experience: the audience sit so close to the action that the actors are almost in reach.

From the moment of arrival to the point of leaving, Jujo has a way to entice and intoxicate day-trippers. Relatively unknown, except by keen city explorers, Jujo at first does not seem much different to other old-school downtown districts. But the genuine kindness from food vendors as they hand over your snack, the smiles of people to their friends as they pass in the street, and the real, unedited lives of Jujo will draw you back again. If not, the food certainly will.