The Moshi Moshi Nippon Festival 2016 in Tokyo ended on Sunday night with a bang and a cascade of golden streamers, as Kyary Pamyu Pamyu closed the festival with a performance that had the entire audience jumping and waving their arms in all directions.

The festival was open to the public over the weekend, where foreigners were granted free entry. Moshi Moshi Nippon aims to spread Japanese pop culture worldwide. This year, the festival went on a world tour to six locations including LA, San Francisco, Paris, London, Taipei and finally Tokyo. The Tokyo event attracted 21,700 visitors over the course of two days. 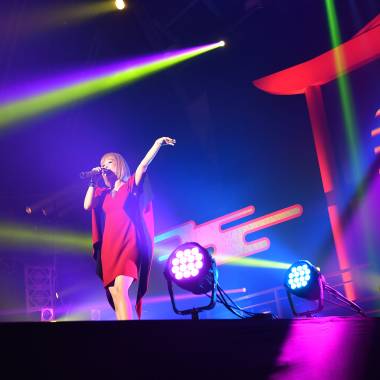 Headlining the festival were music groups CAPSULE and Kyary Pamyu Pamyu. These were the final performers of the weekend, bringing all festival-goers together to the main stage as the rest of the festival started to close on Sunday evening. CAPSULE shook the room to their feet after a build-up of anticipation while the stage was being prepared. The whole stadium thudded to producer Yasutaka Nakata’s electronic beats, and the crowd bounced in sync whenever a beat dropped, and when vocalist Toshiko Koshijima jumped on the stage herself. She wore a red and black dress with long cape-like drapes behind each shoulder, giving her an aura of a space heroine.

The energy that CAPSULE built in the room flowed into the start of Kyary Pamyu Pamyu’s performance, who bounced on stage just after CAPSULE left. She wore an entirely red outfit featuring bright red satin pants and a red bowler hat. The energy that she and her backup dancers, the TEMPURA KIDZ, exerted in their dance choreography made it exhausting even to watch. A hardcore fan wearing a Pikachu costume with glowing accessories knew all the dance moves. Some people stood back from the action, watching the performers and audience from a distance. Others were caught up in the storm of the mosh pit that formed around the stage, where tourists blended in with the serious fanboys and girls of these Japanese stars. 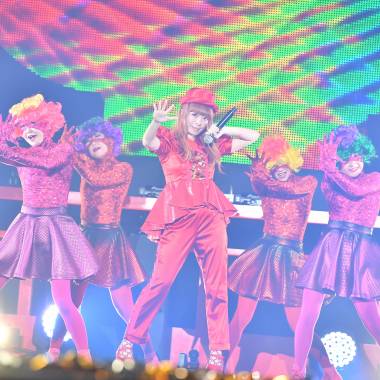 While many attendees appeared to be Japanese, there was still a large foreign turnout. Approximately half the attendees were non-Japanese, with 3,500 foreigners attending the festival on Saturday and 7,600 on Sunday. Visitors to Japan might only know of Japanese pop culture from images on the internet, movies or stories they’ve heard. To see it with their own eyes is a whole new experience and what they might be seeking when traveling to Japan.

Lolita fashion, for instance, is an export that foreigners would associate with Japanese pop culture. The festival not only had a fashion show of Lolita, punk and kawaii fashion, but also presented for the first time the Lolita Award. This award encourages the spread of Lolita fashion and kawaii culture worldwide. The winner was the late Takamasa Sakurai, known as an ambassador of kawaii and the man at the forefront of introducing pop culture, Lolita fashion and anime to the world. He authored several books on Japanese pop culture, including Sekai Kawaii Kakumei (“World Cuteness Revolution”). “Kawaii is now a word that is known worldwide, and that’s partly because of him,” the English host commented after presenting the award onstage. Sakurai died in an accident last year. 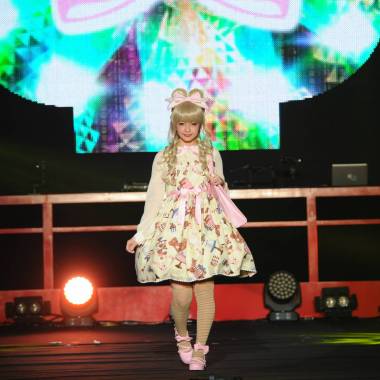 It wasn’t all about kawaii popular culture either. In one area festival-goers could control a drone while watching the flight path through goggles. Gamers were able to try a demo version of the yet-to-be-released Resident Evil 7: Biohazard VR game, without the long queues from the Tokyo Game Show a few months ago.

A pop-up yokocho outside the festival served different kinds of Japanese foods. Perhaps in a bid to show that Japanese food is not just sushi, they had a rather meat-heavy selection with dishes including a wagyu beef bowl, beef horumon (internal organs) ramen and jumbo beef tongue meatball skewers. 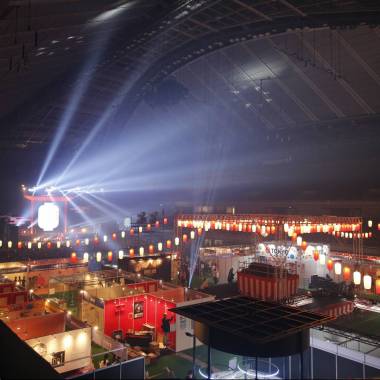 Inside the Moshi Moshi Nippon Festival

The Moshi Moshi Nippon Festival also highlighted traditional Japanese culture. The main stage itself was a mashup of modern and historical, with a huge red torii gate towering behind the J-pop and idol groups on stage. Crowds became hypnotized to near-silence during taiko (Japanese drums) and shakuhachi (bamboo flute) performances on the main stage. The exhibitor booths were always populated with foreign attendees, who could dabble in almost any imaginable part of Japanese culture on the festival grounds. They tried on kimonos, learned to fold origami and saw how katana swords are assembled.

The festival had a good turnout this year, despite the rain on Sunday afternoon. The combination of red silk pants, beef tongue skewers, and kawaii models and singers appears to be irresistible for foreigners and Japanese alike.