The best place for true Filipino food in Tokyo

When she first came to Tokyo 18 years ago, Cecilia Aoki felt that her fellow Filipinos coming back from the Philippine embassy in Roppongi every night had nowhere to have a good bite. There was one problem: Aoki couldn’t cook.

Having met her Japanese husband back in the Philippines, marrying, then moving to Tokyo, Aoki quickly adjusted to her new life. She first worked as a teacher, then a translator. But she longed to find a way to connect with the Filipino community in Tokyo.

She had the stark ambition to start a restaurant in a foreign country but didn’t believe she had a talent for cooking. Luckily, a friend volunteered to help her out while Aoki handled the managerial aspect.

Thus, Nanay’s (the Filipino term for mother) first branch was born in 2004. The first branch was a simple, small six-seater hidden in Roppongi which relied on its adjacent alleyway to hold more seats.

In its first week, there was such a consistent influx of customers coming into their small restaurant that both Aoki and her friend were taken by surprise. Aoki’s friend/co-owner was so overwhelmed by it that she dropped out of their deal.

“After a week, iniwanan niya ako sa ere!” (“She left me alone in the air!”) Aoki laughs about the memory now, but back then, it was a lot for a Filipina to run a restaurant in the heart of Roppongi. 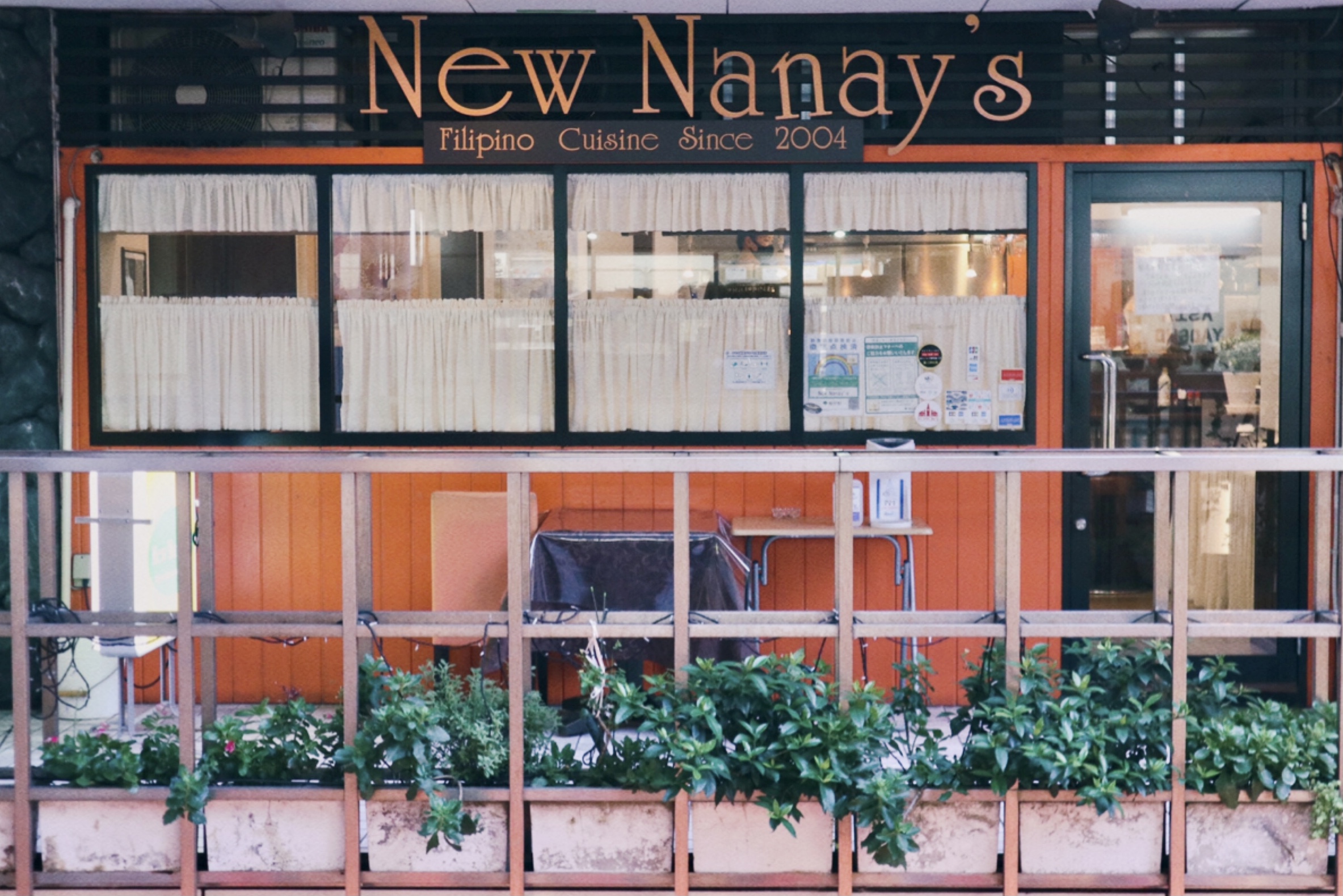 Since the peak of the Filipino diaspora in Japan in the 90s, many Filipinos have settled in Tokyo and have branched out to the education and hospitality sectors. Aoki’s story is a common one among Filipinos. Many are OFWs (Overseas Filipino Workers) and are a part of the droves of Filipinos working abroad and largely supporting the Philippine economy with annual remittances back home.

Nanay’s story began in 2004. Encouraged by the success of the first branch, Nanay’s was afforded a larger space in the Forum building in Roppongi. The new branch was effectively dubbed New Nanay’s.

Tokyo and its internationalizing population has given birth to a diversified culinary landscape. Kei De Guzman, 28, a staff at New Nanay and an OFW, points out uncritically — but wistfully — how at every station you might see an Indonesian, Thai or Vietnamese restaurant — rarely a Filipino one. Even though Filipinos are the sixth largest contingent population in Tokyo, it has De Guzman wondering where the representation is.

Back in 2004, there were four other Filipino restaurants in Tokyo. Of these original restaurants, only New Nanay’s remains. “Sa awa ng diyos (“By the grace of God”), we kept running. The others had to shut down especially during covid-19,” Aoki says.

So how has New Nanay’s withstood the testament of time, competition, and COVID?

A fiesta of flavor

The flavors that constitute Filipino cuisine may be unfamiliar to the Japanese palate. De Guzman thinks the best way to describe it would be sweet. Sour at times, but rarely spicy. 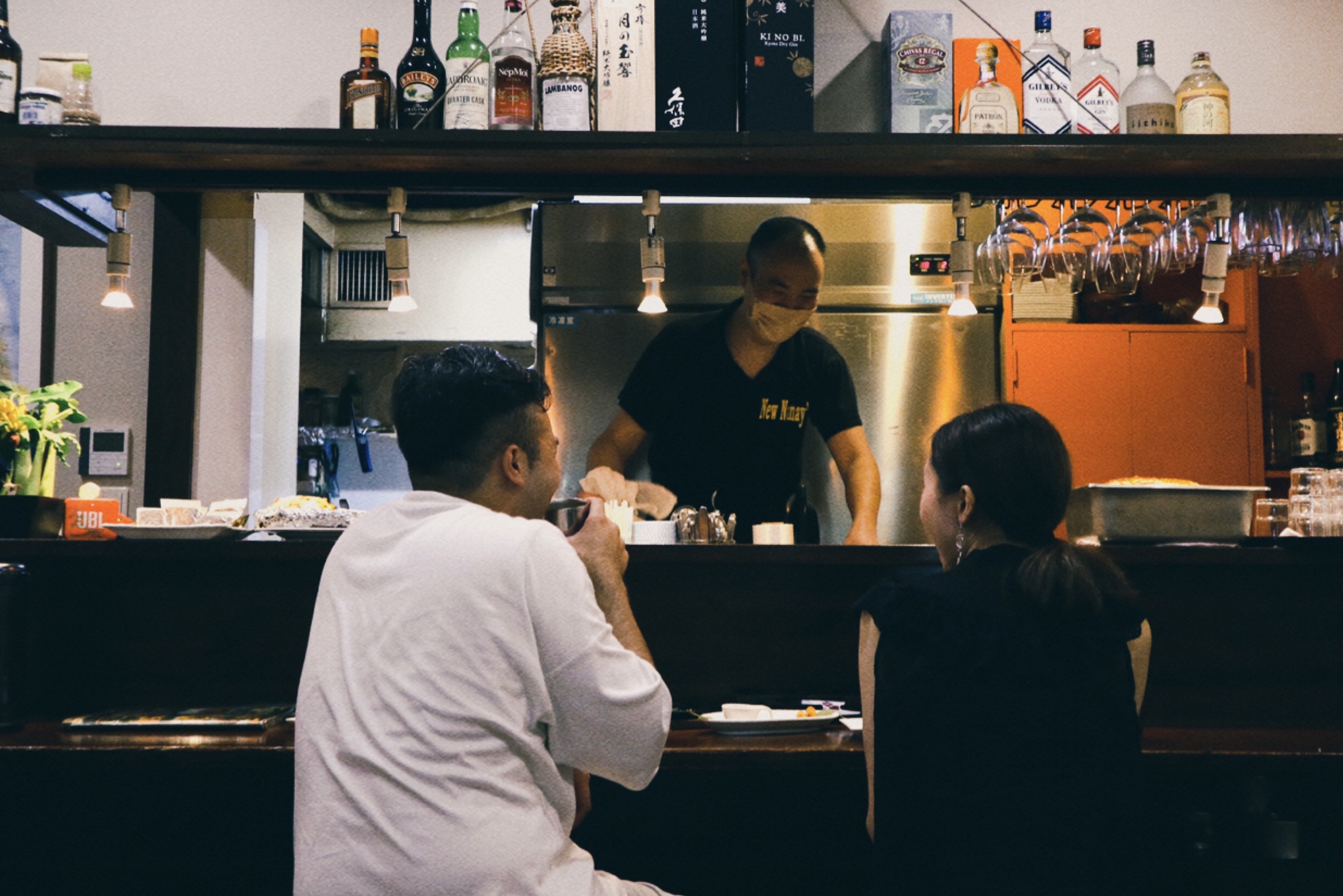 This sometimes-confusing amalgamation of flavors can be owed to the long colonial history of the Philippines, which has shaped its cuisine. From the Spanish arroz a la cubana (ground beef served with bananas and fried eggs over rice) to Japanese-inspired halo-halo (preserved sweets including adzuki over shaved ice reminiscent of Kyoto’s kakigori), the variety of flavors decorating New Nanay’s menu can be overwhelming to those fresh to Filipino cuisine.

For starters? Draw similarities. At first, there were barely any Japanese customers – Aoki thinks that maybe they were too afraid to try it out. The staff of New Nanay’s recommends dishes they think each customer would enjoy. Aoki learned, for instance, that Japanese customers will more likely opt to eat sinigang, a sour soup that is perhaps the cornerstone of Philippine cuisine, if you explain that it’s like tom yum soup without the spiciness. If the customer has a specific preference — such as adjusting the spiciness, removing pork — New Nanay’s accommodates it to the customer’s liking. 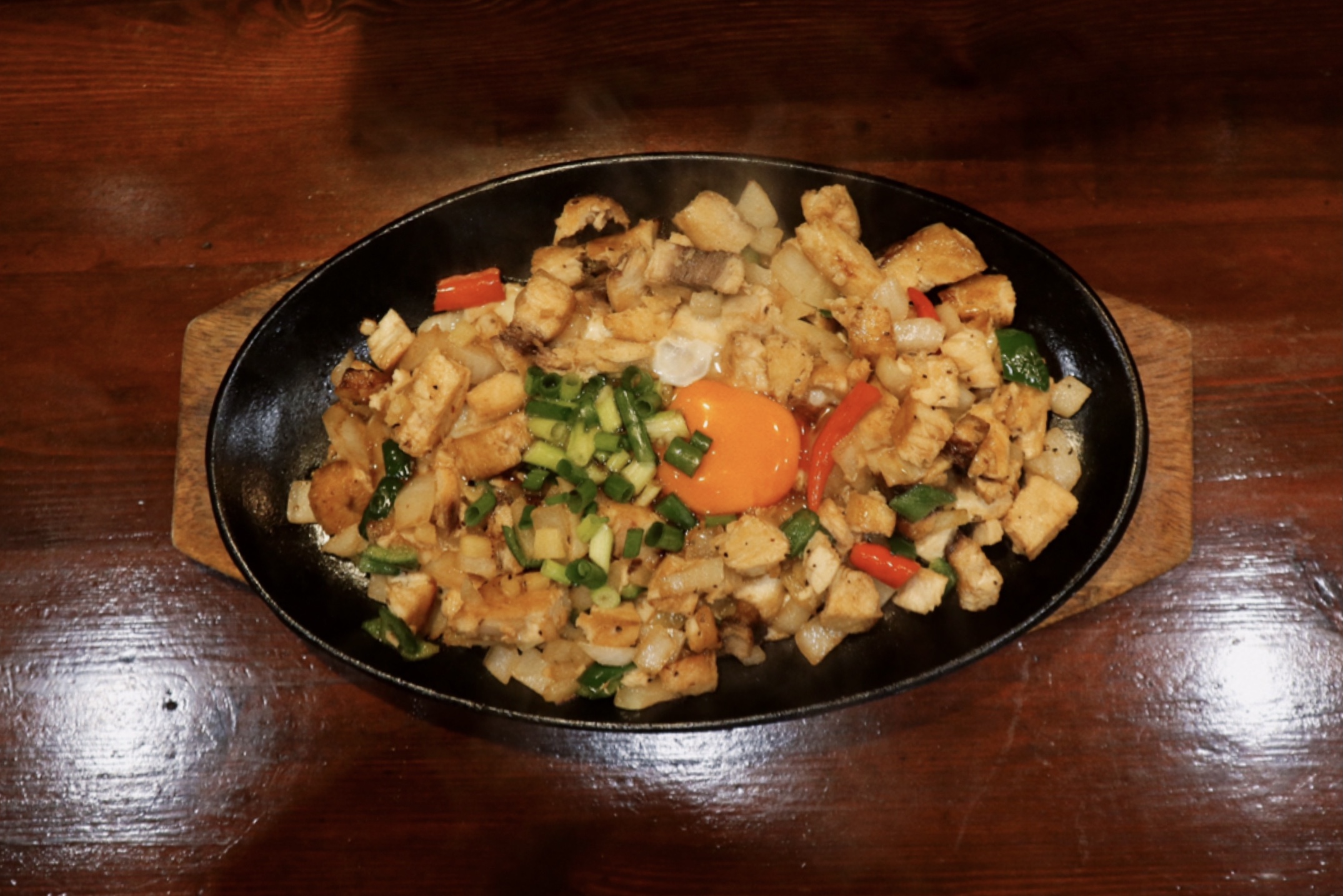 A sizzling plate of sisig

Made from pig’s face and pork belly, seasoned with calamansi, onions and peppers and served on a sizzling platter — the aroma and sourness of sisig packs a multi-sensory punch. This is, after all, the dish that Anthony Bourdain called the best thing one could ever have with a cold beer.

Aoki swears, however, that once Japanese people go to the Philippines — whether it be the popular island paradises of Cebu or Palawan, or the urban metropolis of Manila — that they will return with a penchant for Filipino food.

It’s in the pamilya

De Guzman believes that it’s the Pinoy atmosphere — a certain openness and warmth — that has people coming back to New Nanay’s. In fact, most of their customers are regulars.

Interestingly, if you enter the restaurant during the daytime, the loudness and liveliness of the place is akin to any karinderya, Manila’s small streetside restaurants usually fronting owners’ homes. The Filipino staff, including De Guzman, engage with the (often entirely Filipino) set of customers. At night, customers are mainly Japanese salarymen coming from work. The staff, too, are all Japanese, managed by Aoki’s own daughter who is half-Japanese and married to a Japanese man who works together with her as the restaurant’s chef during the night shift.

Either way, you’ll see the staff behind the counter chatting amicably with all customers. “By the second or third time they come around, parang magkaibigan na kami (we become friends),” Aoki says. 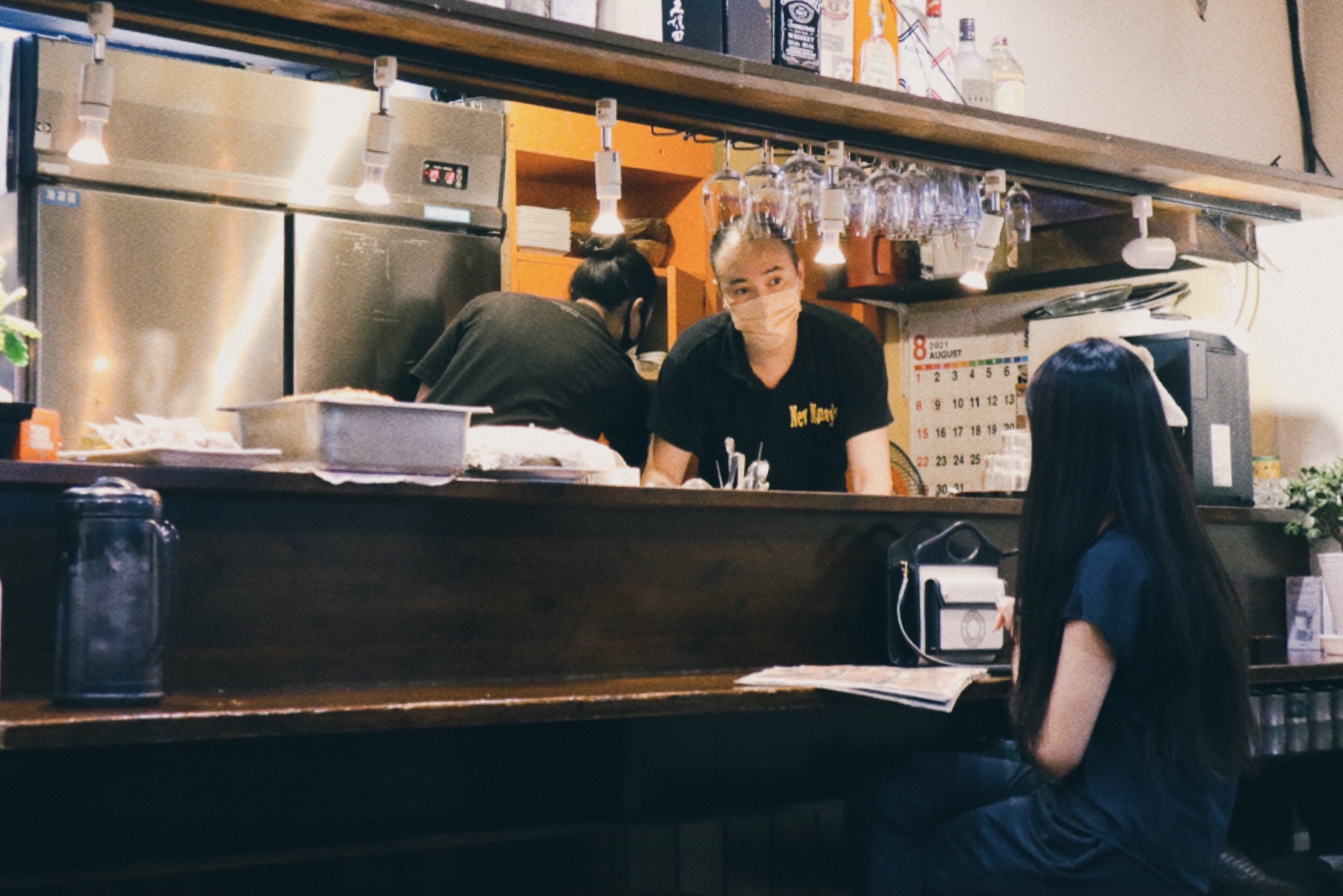 At the heart of Philippine cuisine is hospitality and also, apparently, pancit. Probably because it’s one of the only noodle dishes on the menus of Filipino restaurants, newcomers to Philippine cuisine opt for this Chinese-influenced dish first.

This is the first dish Aoki personally tastes every morning before the restaurant opens. Above all else, Aoki is the nanay, or mother, of the restaurant team. And she says that the pancit is the telling sign of how good the restaurant will perform that day.

De Guzman, who has been balancing part-time work while taking online classes with a Philippine university, finds that as a Filipino, it can be easy to isolate yourself in Japan during the pandemic. Living as a Filipino in Tokyo, it’s quite easy to feel homesick; Filipinos subsist on the revelry and liveliness of being together in person. From working at the restaurant for just five months, De Guzman feels that the staff treat each other like family.

It is essential to New Nanay’s that this same warmth they share behind the counter is extended to their customers.

The Filipino community — and Filipinos in general — is a loud one. Filipinos often make their presence known. In a Philippine neighborhood, quiet nights are kindly interrupted by a neighbor singing into a home karaoke machine. Nowadays, however, both De Guzman and Aoki think that the Filipino community in Tokyo is dormant.

“We’re a loud community, but now we’re lying low,” De Guzman says. “Before, it was easy to meet Filipinos through the church, or through the annual Philippine expo.”

But today, it’s still very much alive in New Nanay’s. Even if COVID-19 measures have rendered the long-established hit of New Nanay’s everyday lunch buffet impossible, there is a steady flow of customers for lunch and dinner, Filipino or not.

Decorating various corners and cities of the world, there’s a certain magic to restaurants like New Nanay’s that transport OFWs and balikbayans (Filipinos abroad returning) back to the Philippines. It smells of patis (fish sauce) and garlic. The staff will certainly greet you with a smile and chat in a way that never seems forced. You’ll see the staff talking with many of the customers like old friends — and they probably are. For the Filipinos scattered around Japan — a population now over 325,000 — New Nanay’s smells and sounds like home. 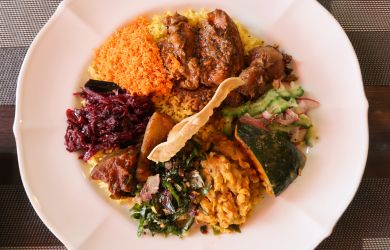 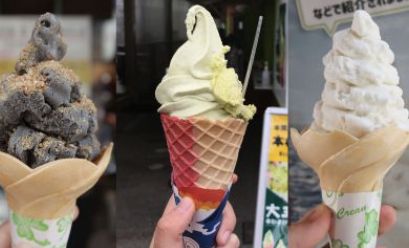 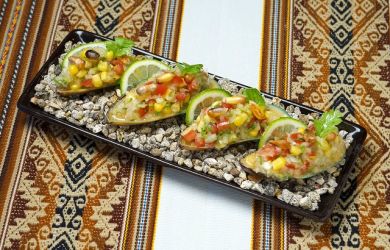 Celebrate Italian culinary heritage with a Japanese twist this winter

The best locations to enjoy Peruvian cuisine in the capital