As Japan gears up for the start of the Tokyo Olympic Games on July 23, 2021, the world turns its attention to the Olympic torch relay currently traveling across the country. For the little coastal town of Kamaishi, the arrival of the symbolic flame and the international spotlight it brings will be much more than an important moment in its history. It will be another sign of how sports and the values of  heart, resilience and union strengthens the town’s future and lifts the spirits of a community that was left in ruins after the 2011 Tohoku Earthquake and Tsunami. What follows is the remarkable story of that community and how the 2019 Rugby World Cup, along with the 2020 Olympics, can bring hope to the resilient locals who survived one of the largest natural disasters ever recorded in Japan.

The initial live, aerial news footage of the monstrous black tsunami wave engulfing Japan’s north-eastern coast on March 2, 2011, almost didn’t seem real. The wave was so enormous and powerful it swept up entire towns and villages — spitting out boats, houses, cars, factories and trees like they were Matchbox toys. The scale was so large that it was hard at first to see the terrible truth that the decimated landscape was also populated with people — more than twenty thousand — who would eventually perish in what was Japan’s largest single loss of human life since the atomic bombing of Nagasaki in 1945.

When the magnitude 9.0 earthquake struck Japan at 2:46pm on that day, hotel proprietress Akiko Iwasaki was in her home adjacent to the Horaikan Hotel on Nebama Beach in Kamaishi, on the northeast coast of Japan’s mainland. Her elderly and feeble mother was resting on the second floor of the house, so after checking on her and arranging for her daughter to bring her down, she went to the hotel to begin evacuating the guests. 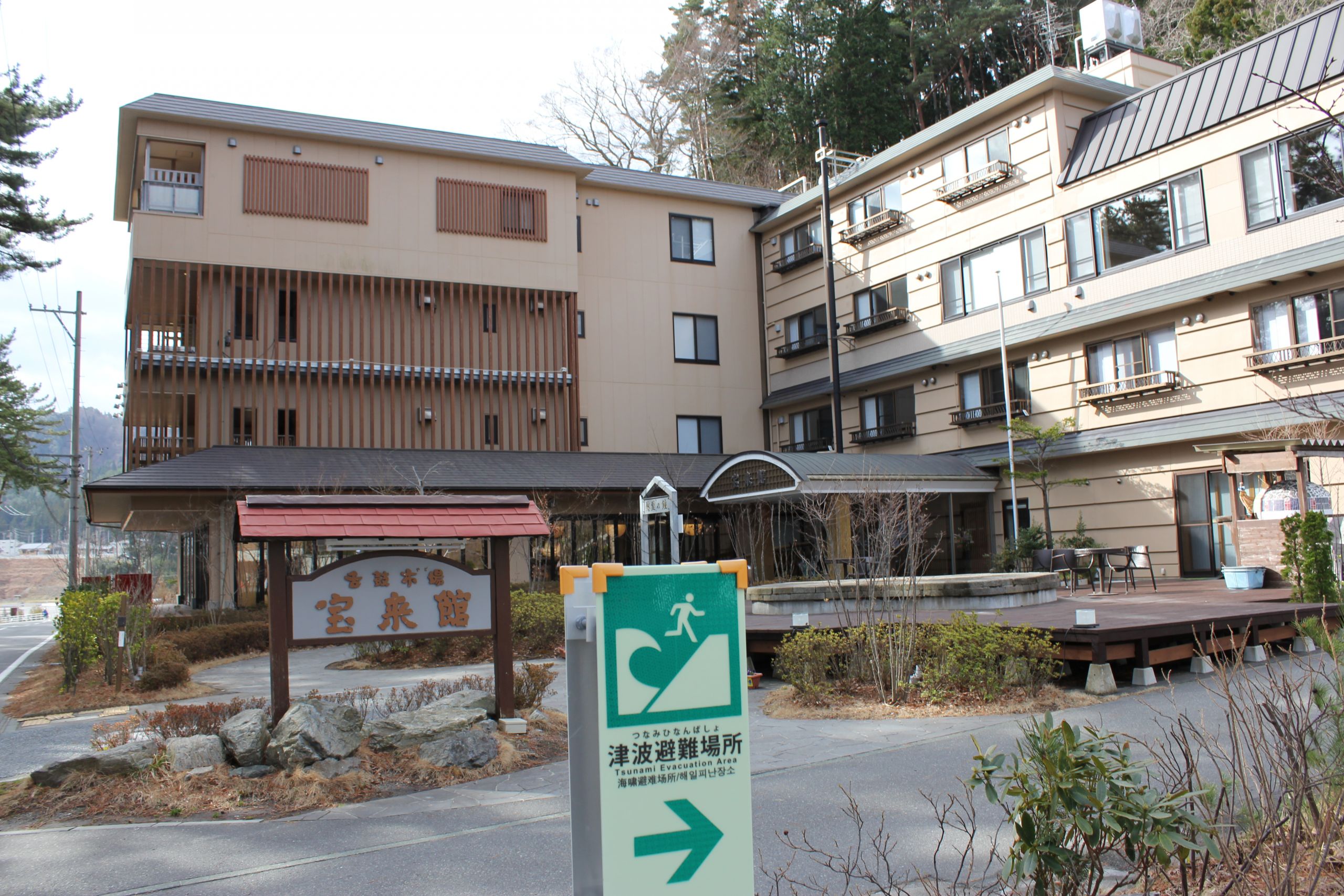 “The emergency tsunami warning system at the beach in front of the hotel was announcing a 3 meter tsunami was coming,” Iwasaki says. “So, with my staff, I started to round up the guests and instruct them to gather in the car park ready to evacuate.”

Iwasaki had constructed a narrow zig-zag evacuation pathway up a hill that went up to a height of 30 meters, which the group made their way to the top of with plenty of time to spare before the wave reached the foot of the hill.

According to Iwasaki, from the vantage point of the path she could see the sea level rising, however the Horaikan was the designated evacuation place for the townspeople and cars were still gathering in the parking lot. Also, two of her staff were by the pine grove besides the beach ringing the warning bell.

“I shouted out to them to come up the hill, but they didn’t. Then one of my staff said, ‘Okami-san, I’m going to go and get them,’” Iwasaki says. “But in my mind I could hear the words of my grandmother, who instructed us: ‘You should never go back—those who go back are never seen again.’”

“They lost their homes and family members, so I thought they could find a kind of spiritual home in the stadium and rugby.” — General manager of the Kamaishi Sea Waves RFC Yoshihiko Sakuraba

However, thinking there was still time and concerned for those who had still not evacuated, she went back down to the beach and continued urging everyone to go up the hill. She realized that the water had now risen high enough to block the entrance to a tunnel which was usually visible in the distance, so she started running with the others towards the entrance to the evacuation path.

“As I was running, I saw a bus across the parking lot suddenly get lifted up by the wave and honestly wondered if I would make it,” Iwasaki says.

Iwasaki did make it back onto the evacuation path, but as she did so, the wave came up the foot of the mountain and she was suddenly tossed into the water.

“I remember looking up and seeing bubbles rising up through the clear water. The sky was blue and beautiful,” says Iwasaki. “I remember wondering, why am I in the water? Is this how I am going to die? Here in the water? Am I destined to die at 54?”

After that everything went dark and an object, which Iwasaki believes was a boat, landed on top of her. Eventually she was able to climb up onto a floating bus and, with the assistance of the others on the bank, was pulled to safety, alongside another local.

More stories on the 2011 Tohoku Earthquake and Tsunami:

Although everyone at the Horaikan was able to escape the deadly wave, their troubles had only just begun. They now had to decide what was the next safest course of action. Stay outside in the below-freezing temperatures overnight? Or return to the hotel, which offered more shelter but, amid the ongoing aftershocks, brought with it the risk of the building collapsing or even another tsunami.

“The spirit to stand again after being knocked down in a disaster is connected to rugby. When you get tackled, you get back up again.”

Roads in the area were badly damaged and rescue vehicles couldn’t get in, so the Horaikan became an evacuation center sheltering about 120 people until March 26.

The Horaikan reopened its doors in January 2012, just 10 months after  the disaster. Ensuring the safety of all her guests and local people was naturally a priority for Iwasaki, so she rebuilt and strengthened the evacuation path behind the hotel to make sure no one was left behind. “I heard two people had died in the next village because they were slow to evacuate because one was in a wheelchair, so I decided to build an evacuation path with wheelchair access,” Iwasaki says.

Miraculously, everyone at the Horaikan survived, but in Kamaishi town it was a very different story. Over 1,000 people perished in a town of just 35,000. The district of Unosumai was particularly hard-hit and the Unosumai District Disaster Control Center recorded 160 deaths. Even though the center was not the designated evacuation spot for the district, the city’s failure to clearly communicate evacuation procedures to locals and first responders meant many residents mistakenly evacuated there. However, the seawater rose to the ceiling of the top floor of the building, which stood 11 meters tall.

Just a three-minute-walk from the Disaster Control Center and 500 meters from the beach stood Kamaishi Higashi Junior High School, neighbored by Unosumai Elementary School, and what occurred there came to be known as the “Miracle of Kamaishi.” All 570 students from both schools, and all their teachers, survived the disaster as they took the initiative and ran, hand-in-hand, up a 2-kilometer slope, moving to evacuation points higher and higher up the mountain.

Across the city’s 14 elementary and junior high schools, a total of 2,911 students survived the tsunami. The students of Kamaishi Higashi and Unosumai Elementary never returned to their schools and both buildings which were fully submerged by the tsunami were eventually demolished and the schools relocated to higher ground to the west. 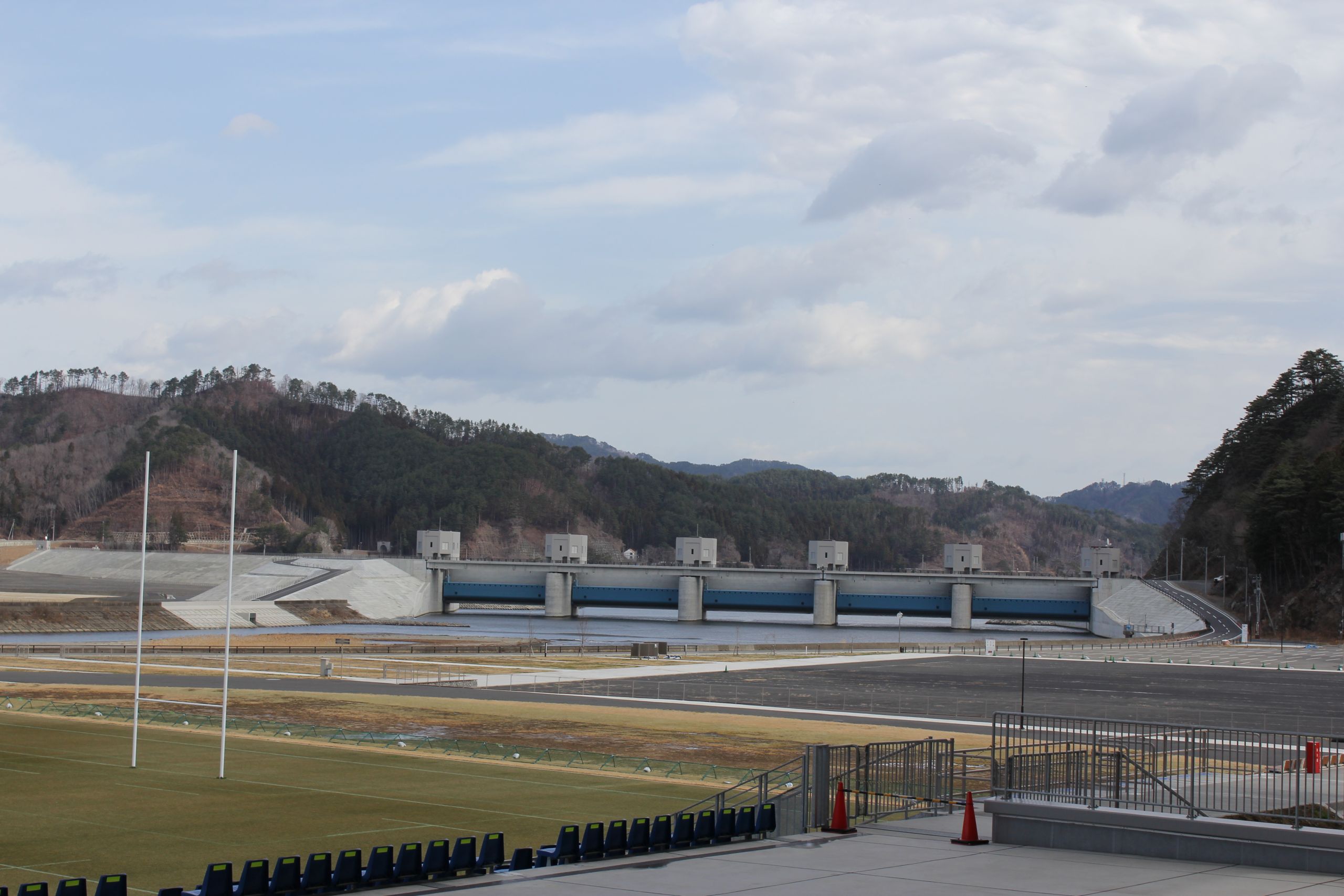 On the site of the former two schools now sits the Kamaishi Unosumai Memorial Stadium, which was completed in 2018, in time for the Rugby World Cup the following year. General manager of the Kamaishi Sea Waves RFC and former Japan national team player Yoshihiko Sakuraba, says that in the wake of the disaster he was initially unsure if it was the right thing to have the Cup in Kamaishi.

“There was an evacuation center near my house and I could see the suffering of the people there and the inconvenience of their lives everyday after the disaster,” Sakuraba explains. “I thought: We must fix the town first.”

However, after talking with survivors, Sakuraba’s thinking changed.

“Many people said they wanted the World Cup to come here. I began to see they needed some kind of home. They lost their homes and family members, so I thought they could find a kind of spiritual home in the stadium and rugby,” Sakuraba says.

Kamaishi has long been one of Japan’s rugby strongholds and the popularity of the sport there is connected to the town’s most important industry: steel. The first blast furnace in the country was constructed in Kamaishi in the 19th century and the town is the birthplace of the modern Japanese iron industry.

The dominance of steel in the region continued into the 20th century and Kaimaishi was something of a steel boom town by the 1960s and 70s, when its population peaked at 90,000 and the Nippon Steel Corporation was the town’s major employer. It was also during this time that rugby began to flourish after the local team was sponsored by Nippon Steel, and between 1979 and 1985 it won Japan’s National Rugby Championship seven years in a row.

The team was nicknamed the “Ironmen of the North” due to these links to the steel industry and the hardened character of the players, most of whom originated from Japan’s rugged northern region. 6 ft 3 in tall, Sakuraba himself was one of these northern “ironmen” and he moved to Kamaishi from his home prefecture of Akita in 1985 to be the team’s lock.

“Fans would travel from all over Japan to watch Kamaishi,” says Sakuraba. “It was rare in this country for people to have such a strong relationship with a sports team, but this team had it. It was about power, people and heart.”

Just the following year Sakuraba was picked for the national squad and made his international debut against Scotland at Murrayfield. He went on to represent Japan in three world cups (1987, 1995, and 1999) and earned 43 international caps. 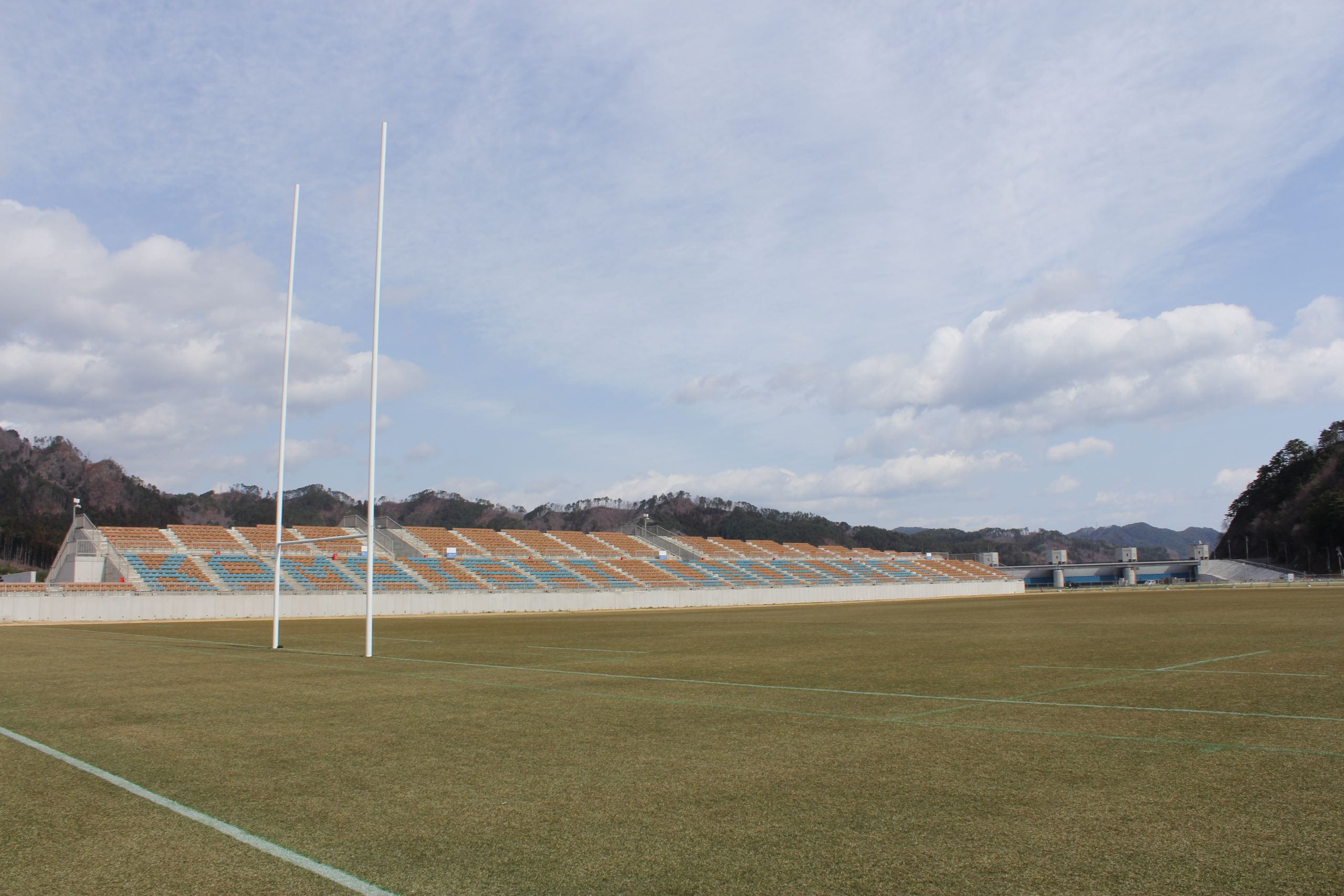 Sakuraba believes the ethos he sees on the rugby field, namely of heart, resilience and union, he also sees it in the people of Kamaishi, especially after the tsunami.

“The spirit to stand again after being knocked down in a disaster is connected to rugby,” says Sakuraba. “When you get tackled, you get back up again.”

Although initially left off the preliminary list of host cities for the World Cup, Kamaishi’s bid was eventually accepted and the stadium was completed in August, 2018.

The following year the Rugby World Cup was held and Kamaishi was supposed to host two pool matches, Fiji versus Uruguay and Nambia versus Canada, but the latter match was canceled due to Typhoon Hagibis, as were the NZ versus Ireland and England versus France matches.

Despite this setback, Sakuraba says that hosting the World Cup gave the town a much needed boost and generated a positive atmosphere.

“I saw many kids smiling after the match, and thought it was the right time and the right thing for the town,” Sakuraba says. “The feeling of the townspeople became very positive even after experiencing a very negative disaster. They could see international sport being played at a high level and feel through the spirit that taking on a challenge is good and that things will eventually get better.”