When real-life accounts about Japan’s earthquakes are so powerful and poignant, it feels wrong, in a way, to read and write fiction about these natural disasters. Fiction involves a certain degree of inauthenticity, and to try animate such intense human suffering that isn’t even real—doesn’t it take away from the actual human suffering that occurred?

Jay Rubin’s book about Japan’s historic earthquakes and the aftermath of the Fukushima disaster, “Penguin Book of Japanese Short Stories,” answers this question. Great disaster fiction doesn’t deal with the horror and the thrill. It deals with the aftershocks: the myriad, impossible-to-explain ways in which an earthquake and everything it entails transforms human lives and hearts.

These five stories cover the 1923 Kanto earthquake, the 1995 Kobe quake and the 2011 Tohoku earthquake and tsunami. Some detail the overt aftermath of a quake, while others focus on the puzzling and ineffable that can occur weeks, months and even years later. 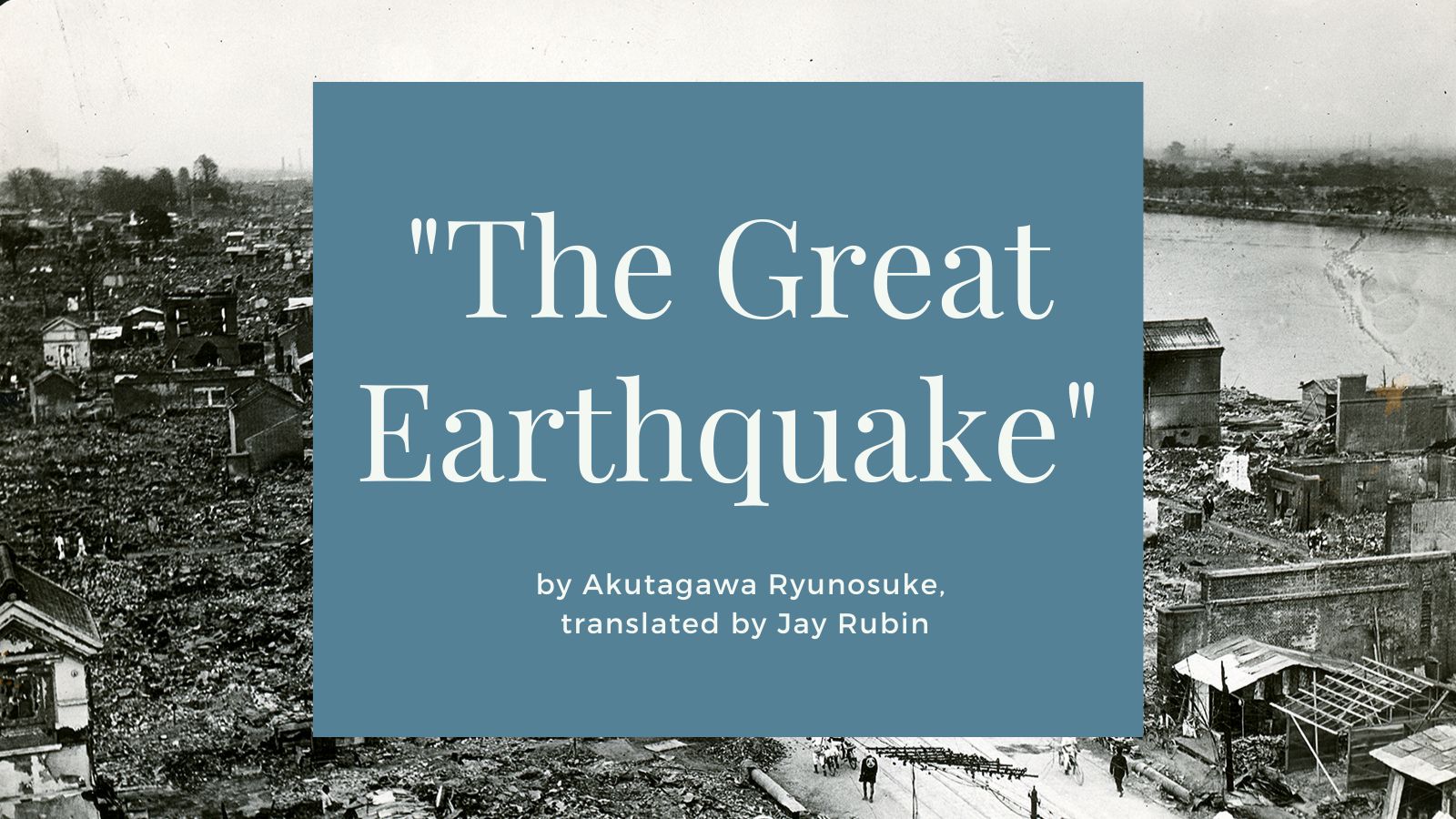 “The Great Earthquake” by Akutagawa Ryunosuke

“The Great Earthquake” by Akutagawa Ryunosuke and translated by Rubin leads the pack. A paragraph-long story that smacks the reader across the face with the sensory experience of death. This short-short is a gripping narrative in its own right, but it serves as a kind of prelude for the quieter sorts of shock and trauma that come later in the collection. 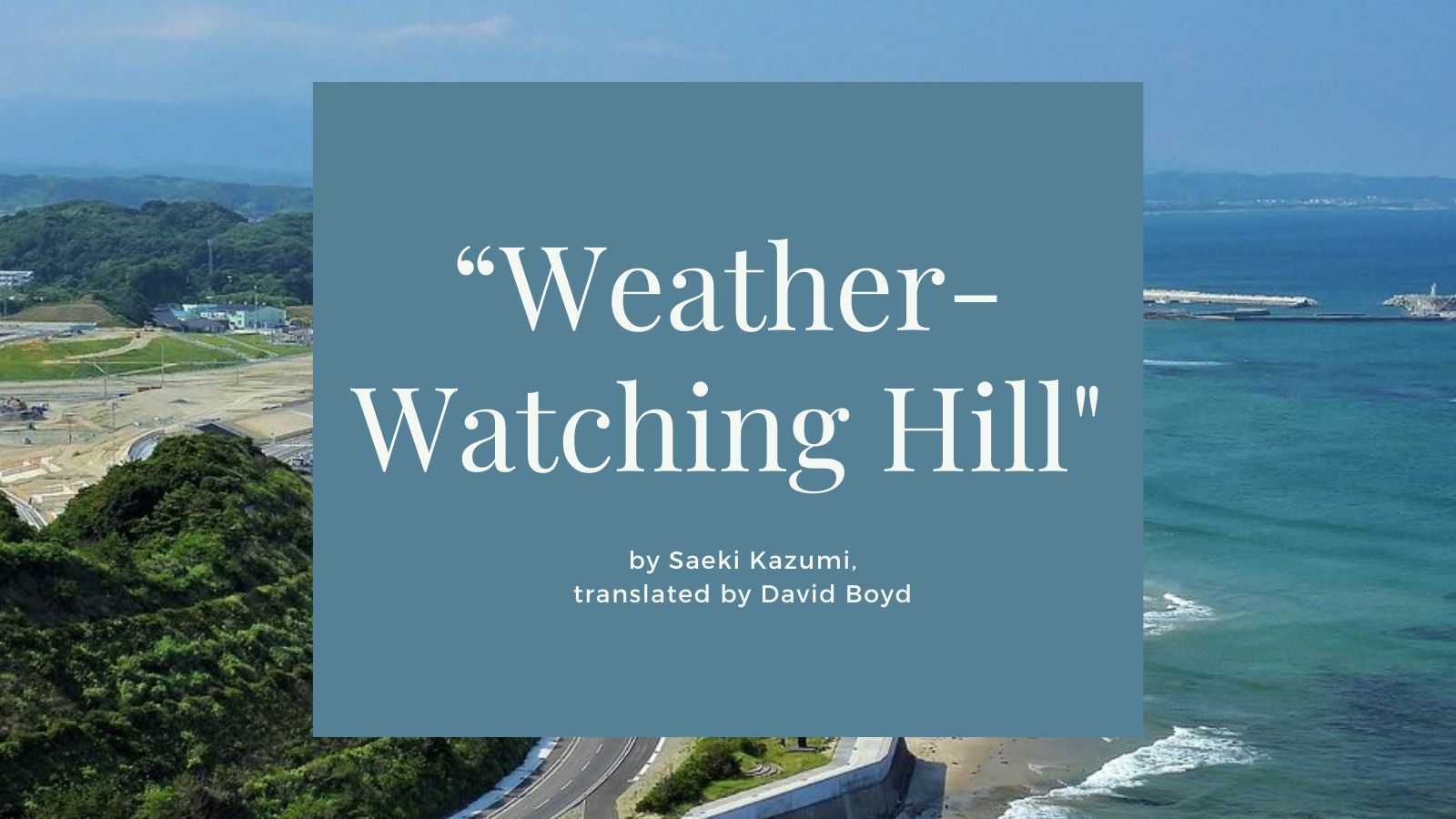 Saeki Kazumi’s “Weather-Watching Hill,” translated by David Boyd, represents the next position on the overt-to-subtle-aftershock spectrum. In the story, the narrator reunites with an old friend after undergoing tsunami evacuation. It features the characters trying to move on with their lives in the evacuation center while flashing back to the preceding days and moments. The story is almost Joycean: a series of delicate moments and conversations connected, depicting the narrator’s emergence from shell-shock into a new reality.

“Hey, Dad,” the narrator’s son asks. “What world are we in? Is it some world in between?”

Large-scale disasters don’t just commit violence — they force tens of thousands to completely remake their lives. “Weather-Watching Hill” is a portrait of one man struggling to process the steep road ahead. 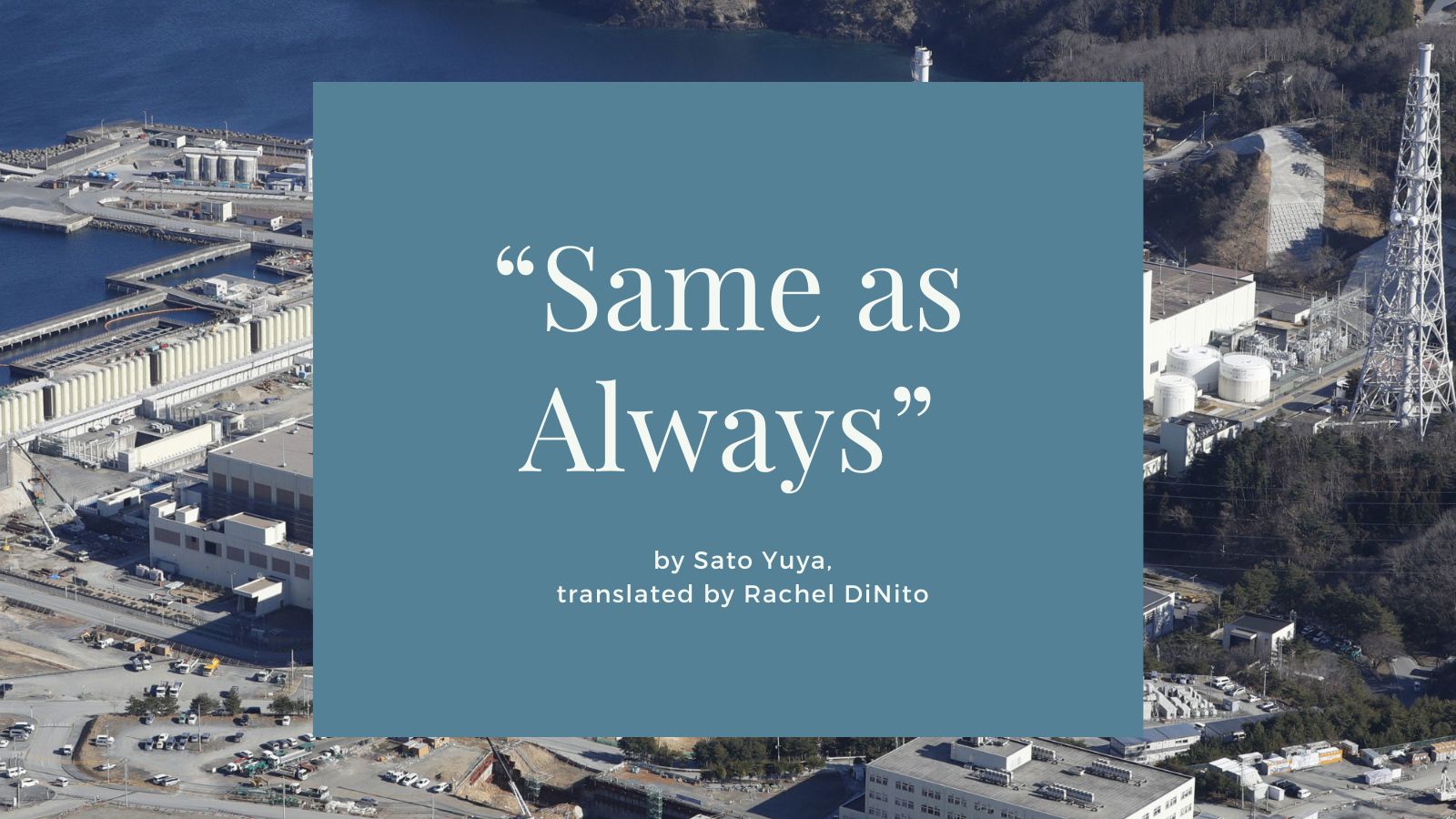 “Same as Always” by Sato Yuya

“Same as Always” by Sato Yuya and translated by Rachel DiNito deals with the similar problem on a more psychological scale. It deals with what can happen when a disaster only indirectly affects you. The story’s narrator, the mother of a newborn, did not need to evacuate from her home but radiation has still contaminated the local food and water, creating a less dramatic but nonetheless serious risk. This invisible, unseeable, almost unbelievable consequence seems to unlock something that was previously buried deep within the narrator: a resentment for her position as a mother trapped in the house, and a grudge towards her endless responsibility to a seemingly insatiable life form: her child. Consequently, she decides to kill her baby by poisoning it with radiation.

This story certainly captures the attention of the reader; it begins by announcing the narrator’s intentions to murder her child. But as the story unfolds, the reader dives deeper into the protagonist’s psychology. A new world soaked in radiation tips a frustrated and probably depressed mother over the edge. By the end, when the narrator’s mother swoops in to rescue their family from the contaminated region, the reader understands, in a disturbing way, exactly what the narrator has gone through. It wasn’t the earthquake that hurt her — it was everything else. The earthquake simply provided an opportunity, an excuse. 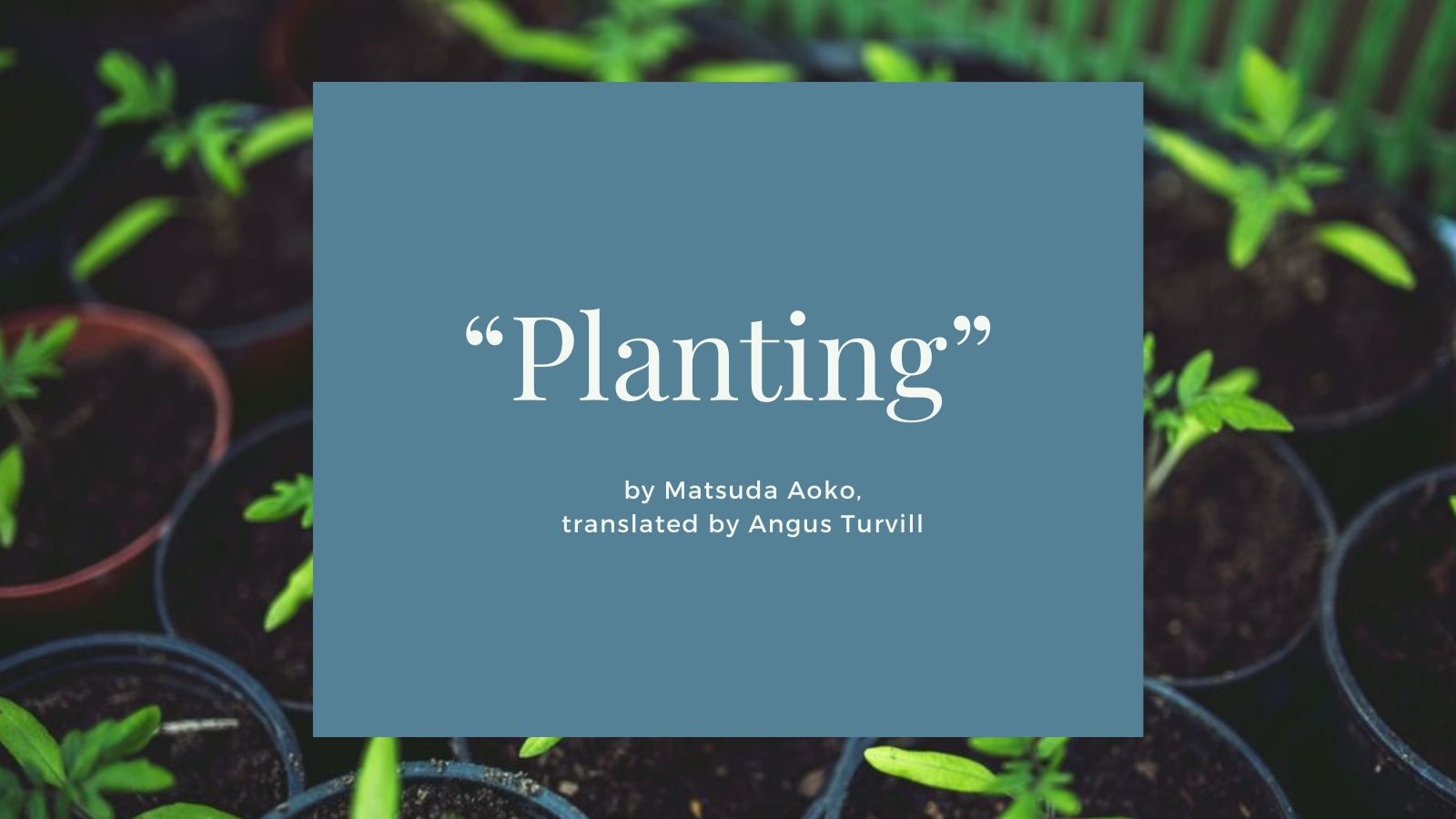 Another story in the collection, “Planting” by Matsuda Aoko, translated by Angus Turvill, is also about the aftermath of 3/11. This story is one position farther removed from the direct consequences of an earthquake. “Weather-Watching Hill” deals with direct impacts, “Same as Always” deals with indirect impacts, but in “Planting,” it is unclear whether Marguerite, the main character, is a victim of the earthquake at all. Instead, she is a metaphorical witness to the horrific damage that was dealt to a wounded nation.

In this experimental story, Matsuda Aoko employs one of my favorite literary devices that other Japanese authors such as Yoko Ogawa and Sayaka Murata have used to devastating effect— making a symbol or metaphor literal by using it as a magical-realist plot device. And that in this story is the act of planting. Planting, or putting labor into an object such that it will bloom into either something beautiful, or into sustenance. You’d think it’s a metaphor, but Marguerite’s literal occupation is to plant things. While at first she plants flowers, soon they turn to shirts, figurines, then dead animals, muddy water, carpets stained with blood. “Planting” takes comments on trauma and aftershocks in a broader sense — the way that the devastation of a quake can force us to rethink our lives and our identities, even if we are distanced from the actual damage. 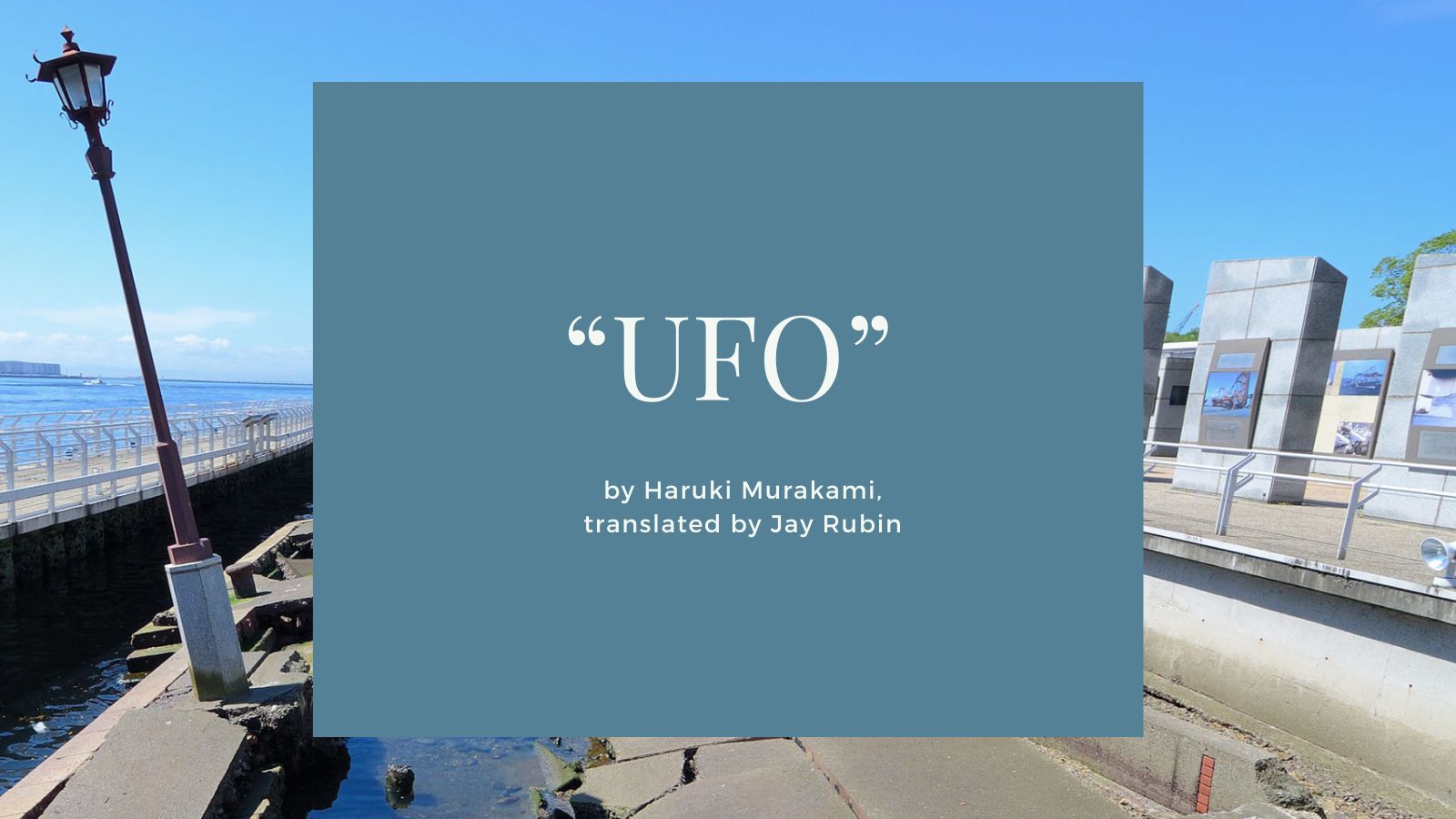 Finally, and occupying the most confusing position of all on the spectrum of disaster trauma, is Haruki Murakami’s story “UFO.” Written after the 1995 Kobe earthquake and translated by Rubin, it is, in some ways, a typical Murakami story. It involves a wife gone missing, a confused and numb 30-something male narrator and two seductive women. The Kobe earthquake seems to indirectly set off a series of events that drive the narrator, Komura, further and further away from his normal life, almost into outer space.

The Kobe earthquake lingers over the story from the farthest possible vantage point: Komura’s wife has no relation to Kobe, but Komura seems to think that the Kobe earthquake is what made her disappear. As a result, he himself disappears to a remote corner of Hokkaido, in the midst of the bears and the freezing wind, with two strange women he has only just met. It touches on a remote, distant trauma that is almost impossible to identify, but that a reader can somehow, barely begin to comprehend.

The earthquake stories in “The Penguin Book of Japanese Short Stories” teach us that earthquakes do have such a power.  They set off forces and events in our lives that we can not yet begin to understand. In 2021, we are only beginning to catch up with a world that shook like crazy a decade ago.